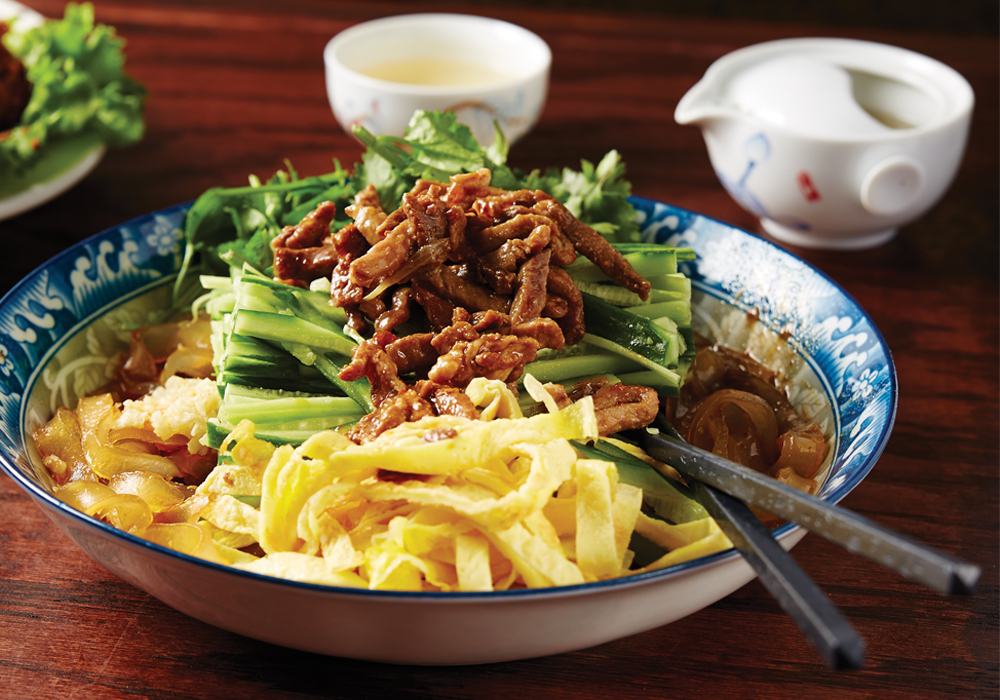 Diners will enjoy more than a slip of the tongue at this Chinese eatery. image: yvonne albinowski

It’s possible to order the standard egg drop soup, beef with broccoli or sweet and sour chicken at Beijing House in Syosset. But that’s not what it’s about. This is not a Chinese American restaurant, but one that features the food that the people of China actually eat. That’s why almost every diner at this restaurant, which opened in October, is Chinese. The word is out in that community and everyone somehow knows to bring their own wine.

Beijing House’s basic décor underplays its creative menu. Though most American diners are unlikely to order pig intestine with hot chili pepper or stir-fried kidney and yams in blueberry jam, there’s a sizeable middle ground between these and egg foo young. That gap makes it possible to peruse Beijing House’s menu with a relaxed, adventurous attitude and eat authentic, never-before-sampled dishes.

The four diners at our table were poised to order the usual four appetizers, four entrées and four desserts when an honest waiter interceded and set us straight. “Too much,” he said. “The portions are far too large for each of you to eat a three-course dinner.” He was right. We ended up ordering sparingly with three appetizers, two entreées and no desserts. Ice cream was the only one available and our take-charge waiter delivered the bill to our table without even asking us if we wanted any. He was right again. We couldn’t even finish what we did order. The check for all this food was less than $78.

Although we ordered from the menu’s middle ground, we nevertheless tilted toward the exotic with an appetizer of ox tongue and tripe with hot chili sauce ($10.95), wood ear mushrooms with black vinegar ($7.95) and green bean jelly cucumber and pork minced special sauce ($11.95). The two main events were sautéed lamb spare ribs with cumin seeds ($28.95) and stir fired pork meatballs with soy and vinegar sauce ($11.95).

The tongue had two red peppers next to it on the menu and did generate some back of the mouth spiciness and plenty of flavors. A mild counterpoint was the wood ear mushrooms with an interesting texture that was subtle, almost bland. That green bean jelly cucumber with pork minced special sauce turned out to be a colossal mountain of noodles infused with vegetables and topped with a mound of pork. Both the tender, easy to cut sautéed lamb spare ribs, buried under cumin seeds and the light stir-fried pork meatballs (26 of them) received a deserved enthusiastic response.