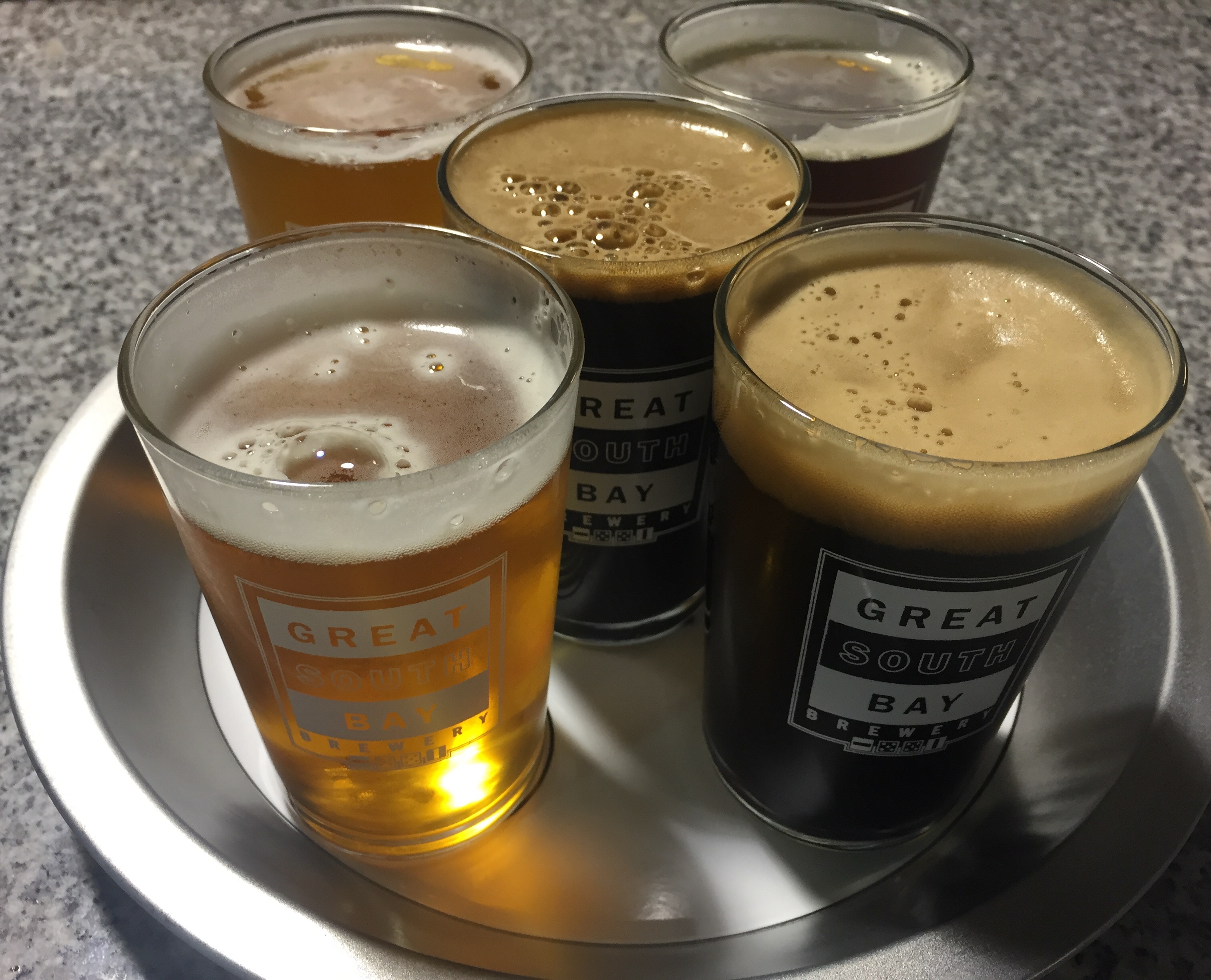 Craft beer the way it was meant to be enjoyed.

A beer after a long day at work is great and all, but it pairs best with good friends, barbecues and cornhole tournaments. That’s the vibe Great South Bay Brewery looked to create when they opened their 4,000-square foot tasting room in the same building as their brewery three years ago. There are tables to sit at, foosball and cornhole. Food trucks like Mr. Smith’s Seafood Truck and Little Kitchen on Wheels frequently show up so customers can re-fuel mid-tasting, and the craft brewery extended its hours to 10pm in February so customers could linger longer, play one last game of cornhole and most importantly get home safely. 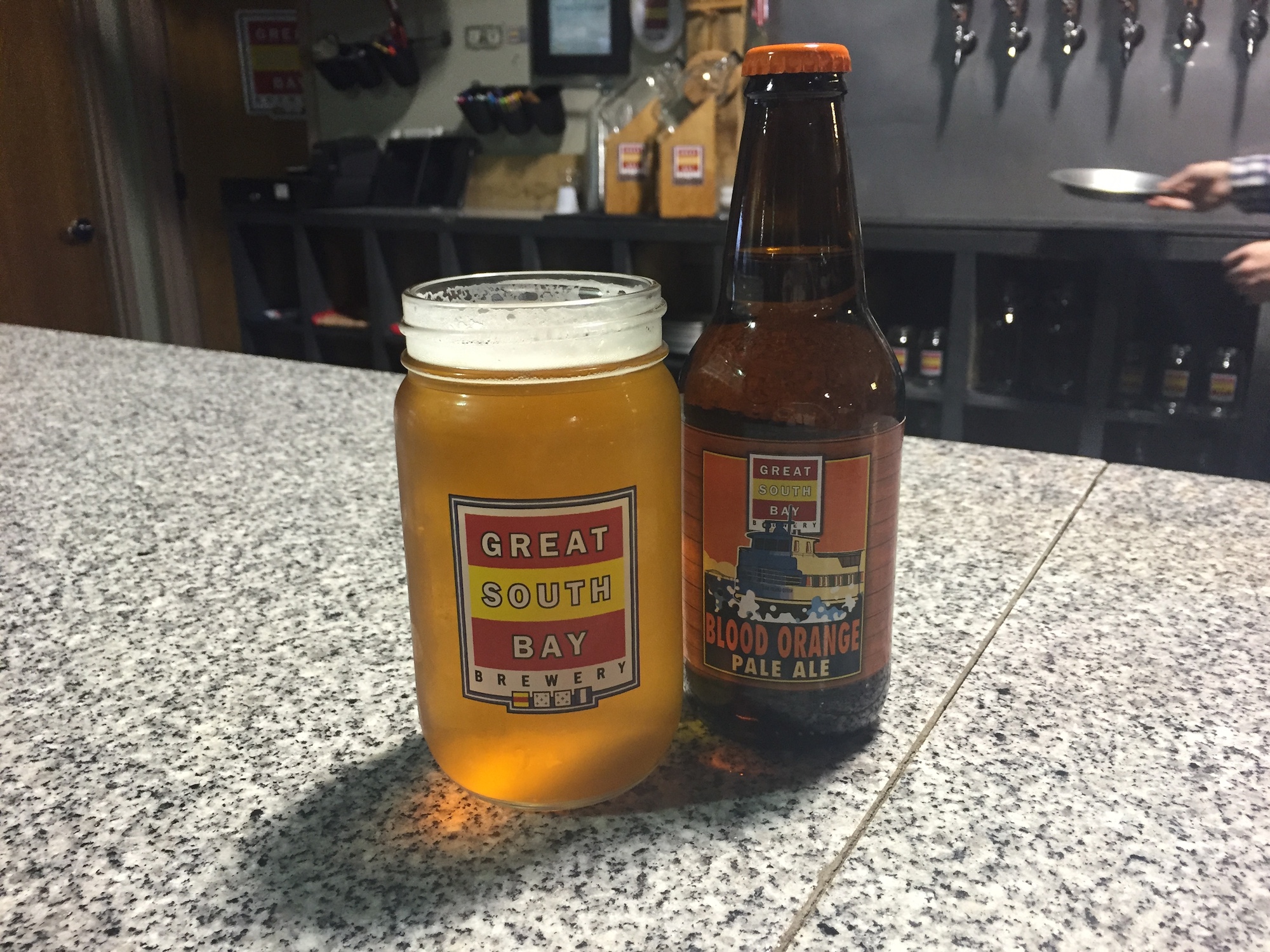 The Blood Orange Pale Ale has something for every type of beer drinker, so it should come as no surprise that it’s Great South Bay’s most popular brew. It’s bitter like a pale ale tends to be, but the blood oranges adds a sweet fruity flavor and drinkers taste malt at the finish. “It’s really in a league of its own as far as the flavor goes,” Derby said. “It’s almost a gateway into new flavors of beer.”

Drink with: Because the Blood Orange Pale Ale has so many flavor profiles throughout the entire beer, your food pairing options are limitless. “It’s going to go well with a light salad with some fruit in it. It’ll go well with something spicy because the hops and the bitterness are going to cut through that spiciness. The malt at the end, the caramel, the sweetness, means that it can go well with a meat or a fish.” 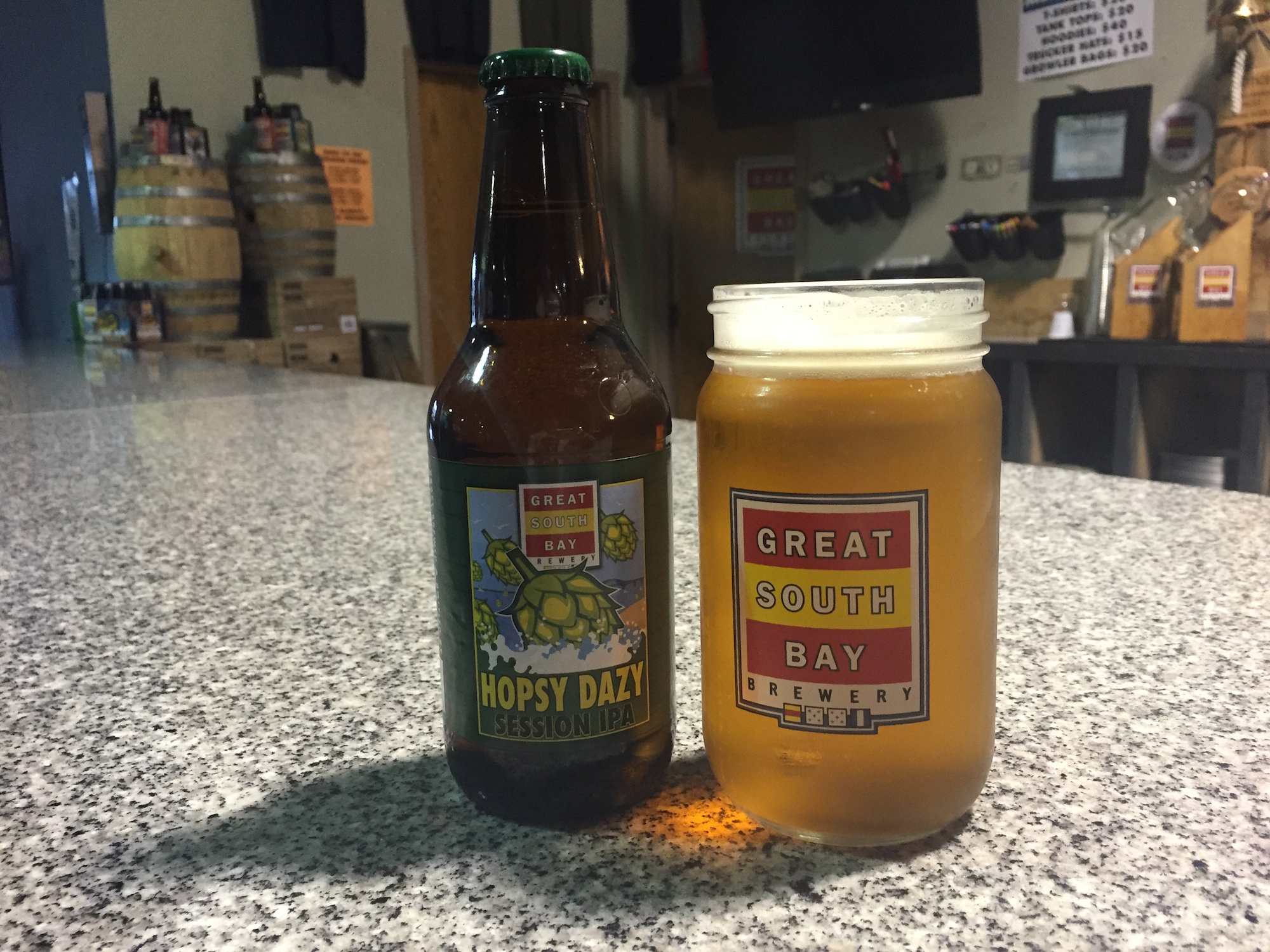 The Hopsy Dazy has the bitter flavor of an IPA but at 4.5 percent ABV won’t knock drinkers on the floor.

Derby tends to recommend the Hopsy Dazy, a session IPA, to newer beer drinkers because at 4.5 percent alcohol by volume, it’s not going to knock them on the floor. “It has the bitterness and aroma of a regular IPA but it’s brewed with less malt, which means it’s going to have less fermentable sugars so it’s not going to have a high alcohol content,” he said. Of course, anyone can enjoy the full-bodied brew. “It’s a very American-style IPA. It’s nice and drinkable.”

Drink with: Since Hopsy Dazy has a high hop profile, reach for something spicy, such as a Thai dish like drunken noodles. “It’s oily, it’s spicy. The hops are going to cut through that in the beginning and then you’re going to get to taste some of the other flavor profiles in the beer and then it’s going to cool down that spice.” 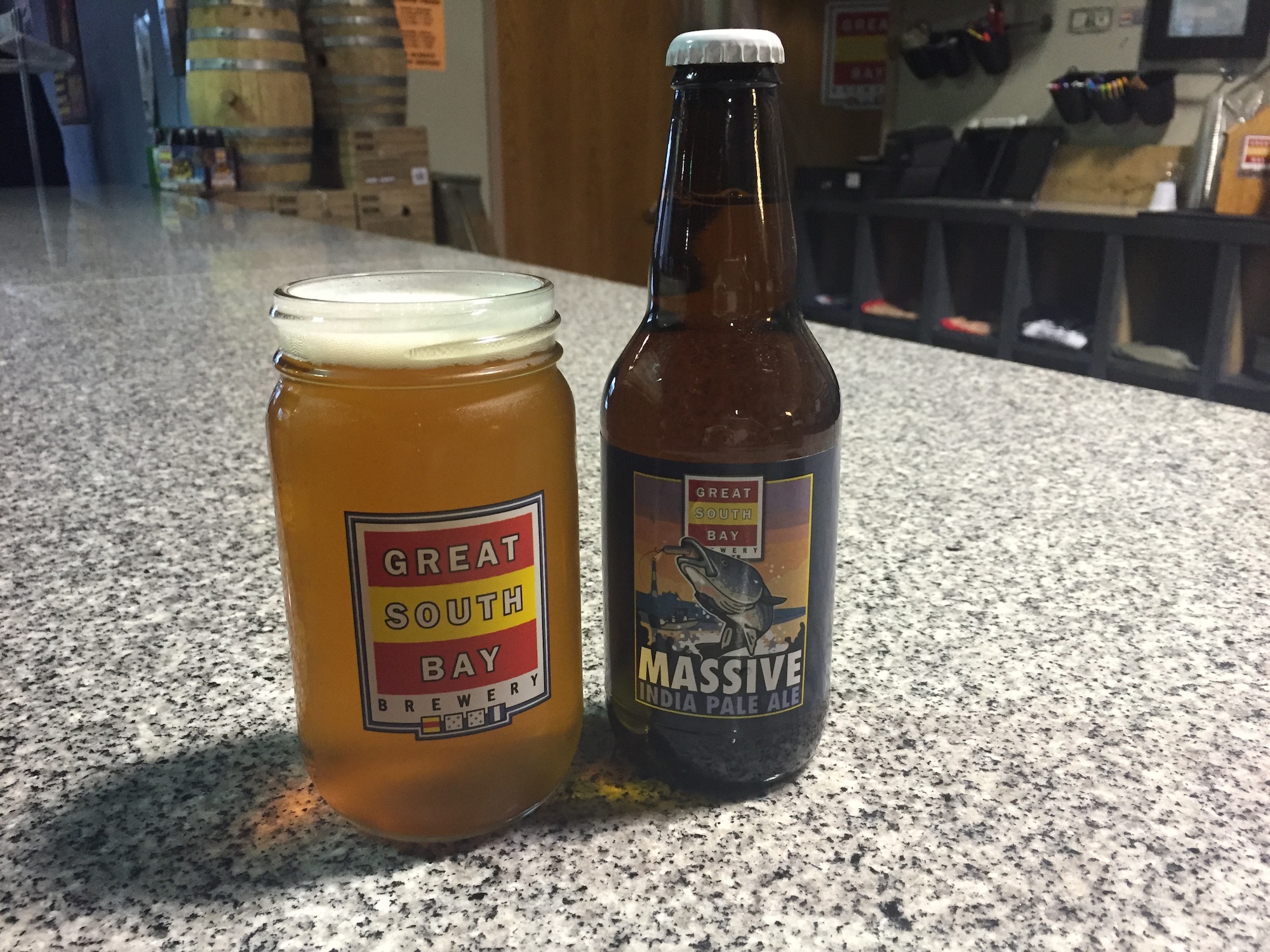 Massive just might be the best IPA you’ve never tried.

Massive just might be the best IPA you’ve never tried. It’s not highly distributed, but people flock to it, even Derby. “Before I started working here, massive IPA was probably my favorite IPA that I ever had,” he said. “It’s just very well-rounded, aromatic, floral in the beginning, beautiful hop flavored at the start and then it just finishes nice, crisp, perfect malt at the end.”

Drink with: A good old-fashioned burger. Derby loves to stop by PeraBell in Patchogue for a glass of Massive and a burger. “Don’t go crazy with cheese topping. It’s going to cleanse your palate because of the strong hops…and will feel like a whole new bite every time.” 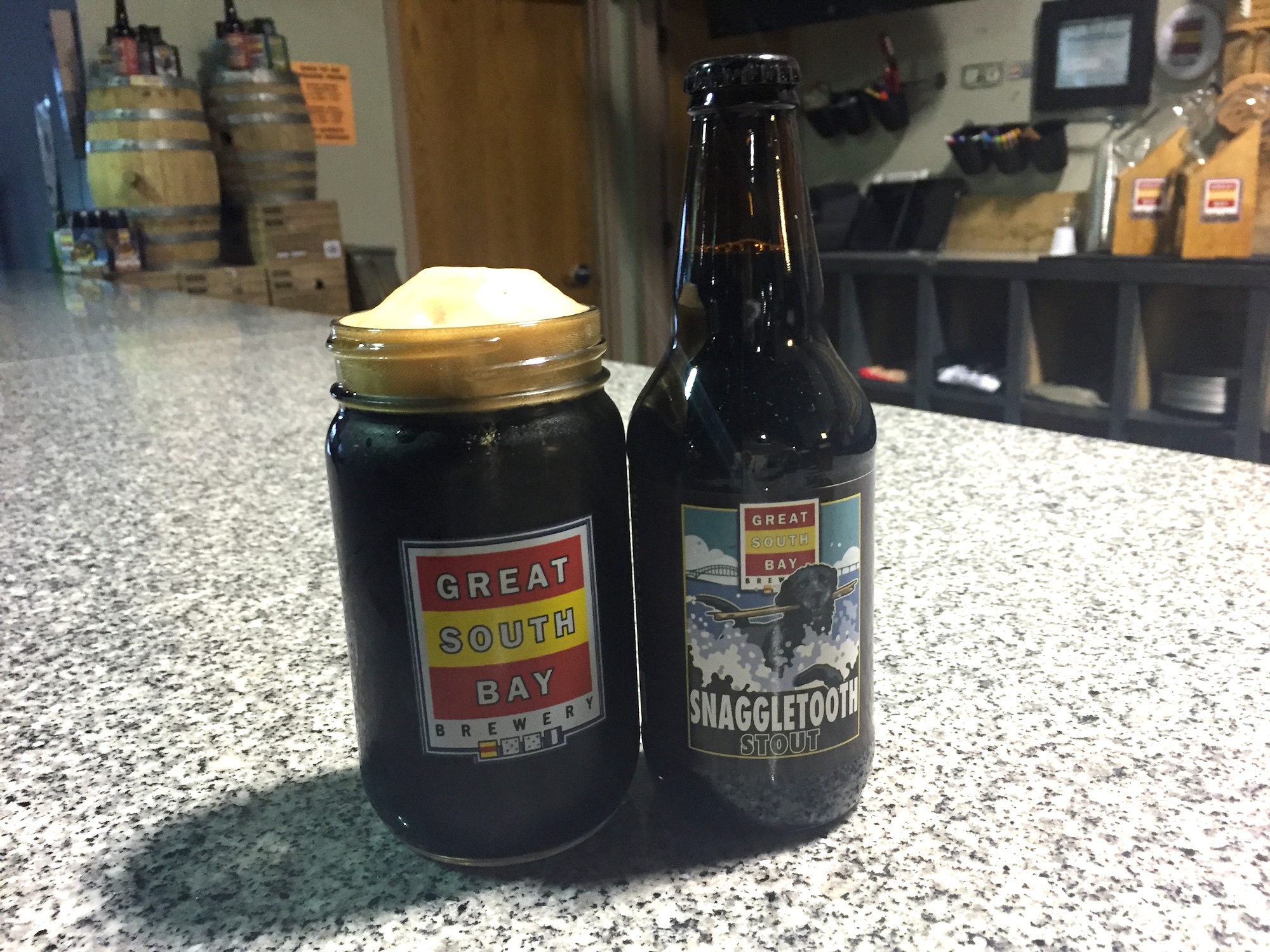 The Snaggletooth Stout is a favorite amongst Guinness lovers.

The limited edition Snaggletooth, a favorite amongst Guinness lovers made with unique ingredients like roasted chocolate malt and fuggle hops, was just released in February. “It’s a nice, well-rounded stout,” Derby said. “There’s not too much alcohol bitterness or bite to it but it is 6.5% ABV so it does has some punch to it once you have a few.”

Drink with: Oysters, especially if you eat those trendy briny fish Long Islanders are eating by the dozens. “The chocolate sweetness from the stout is going to pair well with the salty-sweet profile that you get.” Fresh crab dishes work for the same reason. 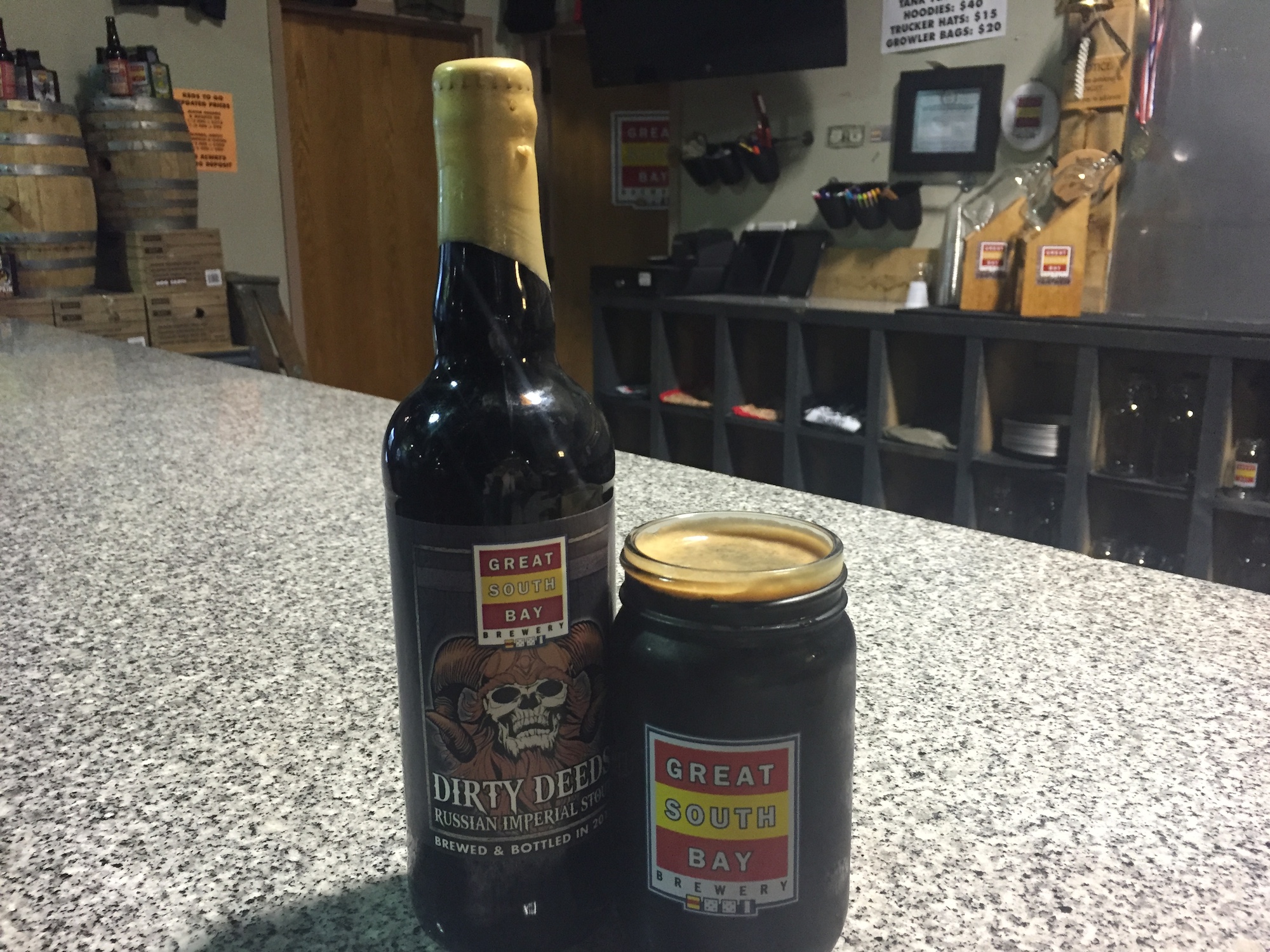 The Dirty Deeds Russian Imperial Stout could be gone in the blink of an eye.

Another limited-edition brew released in February, the Dirty Deeds Russian Imperial Stout could be gone in the blink of an eye—Great South Bay Brewery only made 30 barrels of it, mostly for the tasting room. The full-bodied stout pours black, has a caramel head and notes of espresso, vanilla and chocolate.

Drink with: Nothing. “This is one of the beers that you have at the end of your dinner or by itself.” If you have to eat something with it, go for something fatty like a pork belly. “The fat is going to coat your tongue and mask the initial punch of the alcohol and you’re going to get to appreciate all the subtle flavors in the beer like the vanilla and the chocolate.”