“I love the way music sounded at the height of the CD era: that late 90’s stuff, right before radio music started sounding so over processed and lifeless.”—Gianni Paci

Oyster Bay native Gianni Paci recently released a video for the catchy song “Time and Time Again” off his debut solo EP, Walking Through a Movie Scene. Directed by Patchogue native Anto Gharibian of Whooden (Beyoncé, Gigi Hadid) and recorded at Cove City Sound Studios (Mariah Carey, Billy Joel), the video shows Paci and others engaging in a game of laser tag depicting a young man coming to terms with his masculinity in the context of his love life. As his defenses and pretenses are shot down, his true self emerges.

The singer/songwriter/guitarist will be playing an electric set with a backing band on Sunday, March 13 at 6pm at Revolution Music Hall in Amityville as part of the Green Room Recording Battle of the Bands. Paci, who is already writing his next EP, discussed his latest video, musical interests and surprise covers.

Long Island Pulse: What inspired the lyrics and music on your EP Walking Through a Movie Scene?
Gianni Paci: Walking Through A Movie Scene is definitely a snap shot of a pivotal chapter in my life. I pulled from a lot of different places in the writing process: my first love, out-of-school, ‘real life’ disillusionment, the break up of my old band and my first real experiences with the bittersweet beauty in which ‘people leave and places fade away.’ I think of the EP as a kind of send-off to my childhood—the exact moment at which I find myself at a crossroads with all of the trappings of naiveté, all of the promise of maturity and the liberation that comes with the risk of facing one’s truth. It’s an important part of my musical journey, as it is the sound of a person having the courage to seek out and walk to the edge of the cliff, just on the brink of taking that enormous leap of faith.

Pulse: How has your style changed from your previous recordings?
Paci: The work I put out under my old pseudonym, The Pine Hollows, was not quite as crystallized, aesthetically, as my solo release. I wasn’t yet brave enough to go out on my own at that point, or I hadn’t yet realized that it was in me to be exactly who I am. I was still very convinced by the notion of working with a team, even though that was more of a front in practice than an actuality. I’m not knocking working in a group setting, and have learned a lot in the process, but I do think my truth is more in trusting my mind’s ear, and my mind’s eye. That’s what Walking Through a Movie Scene is: a transition between the mask or training wheels that was The Pine Hollows and the raw, limitless universe that is my solo work.

Pulse: What are you listening to lately?
Paci: I’ve been very inspired lately by bands like The La’s, Hole, the New Radicals, early Britney and even Sugar Ray. I’m writing the next EP right now and I’m very excited about where it’s heading. I love the way things were sounding at the height of the CD era: that late 90’s stuff, right before radio music started sounding so over processed and lifeless. 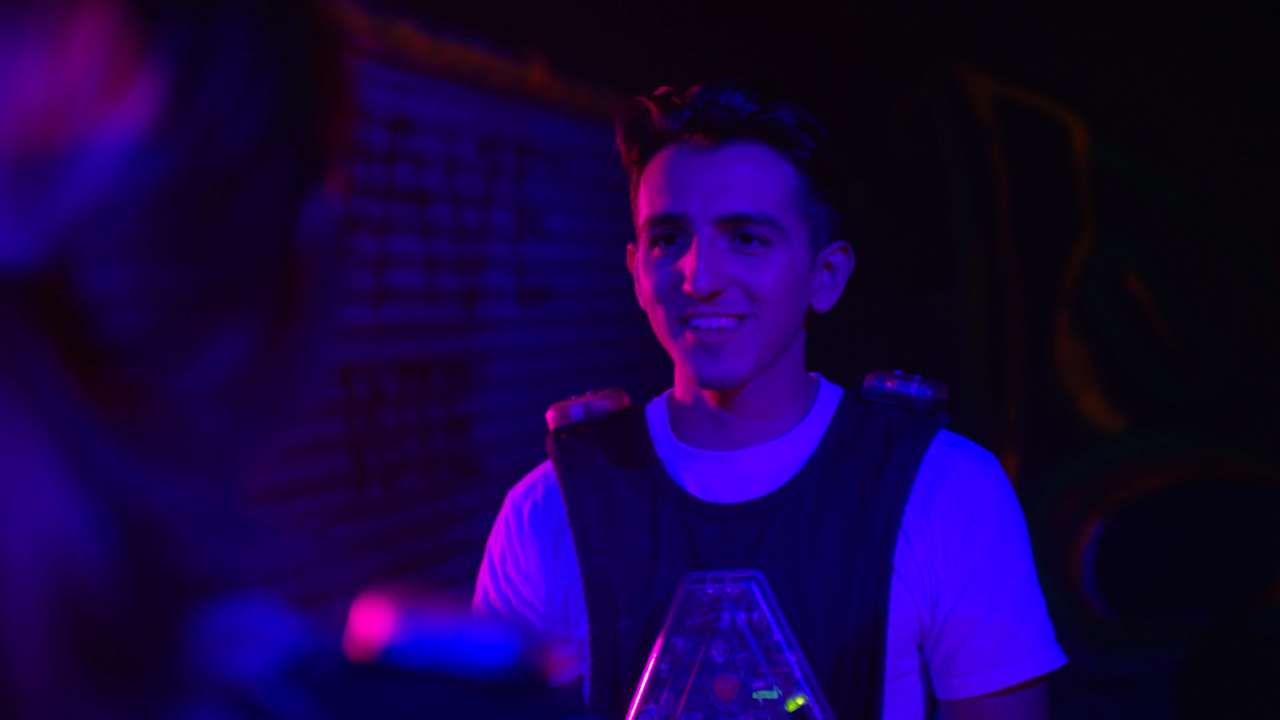 Pulse: What’s the meaning behind the song ‘Time and Time Again,’ and how does it relate to the concept of the video?
Paci: I wrote ‘Time and Time Again’ at a moment when I was first forced to face the reality of graduating. It’s one thing to have your hopes and dreams when you’re still living in the bubble that is school, but it becomes a whole different monster when you start to realize just how different your life’s path is from most of those around you. So I was coming from a place of being dogged down by the chorus of Doubting Thomas’s, having had to deal with them for the first time as a young adult who had paved the way for himself. I think that comes across in the video in the sense that we see these two characters at war with each other (and at war with themselves, as personified by the group of men and women who flank them). And they finally come to a place where they can laugh and share in the inanity of it. It’s only laser tag, after all.

Pulse: What can we expect to hear when you perform on March 13th at Revolution Music Hall in Amityville? Any covers?
Paci: The show at Revolution Music Hall will be a lot of fun. I’ll be playing a lot of the new stuff I’ve been writing as well as the songs from the new EP. As for covers, I like to keep an element of surprise, but I can promise some Bowie and some Strokes…