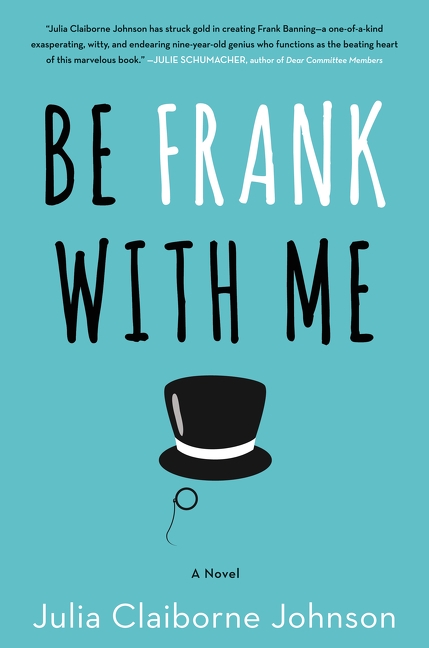 You can’t help who you fall in love with.

Your heart doesn’t see skin color, hair color, body weight or bust size. It doesn’t detect wallet contents or car type. You fall in love with someone because…. well, just because. And in the new book Be Frank with Me by Julia Claiborne Johnson, that someone might be a little boy in spats.

In a long line of bosses, Isaac Vargas was the one Alice Whitley liked best: he was genuinely nice and he had faith in her. So when he asked Alice to go to California and work as a temporary assistant to famed but reclusive author M.M. “Mimi” Banning, she accepted the assignment, even though she really didn’t want it.

When Alice’s mother was a teenager, she read Banning’s book, The Pitcher. Everybody did; it was a best-seller-cum-high-school-requirement. But Banning hadn’t written a word since and Vargas, as her editor, was eager for a second novel. Alice’s help would make Banning’s life–and her work–as easy as possible.

But it wasn’t going to be easy for Alice.

Her first moments at the Banning estate set the tone: M.M. Banning was a blunt woman, not at all prone to social niceties. She called Alice homely, then tasked her with fixing things, meals, and caring for Frank.

At nine years old, Frank Banning liked sophisticated pretend games and black-and-white movies. He wore old-fashioned clothes (the kind Alice would expect a grandfather to own), and hats to match–sometimes with gloves or a pince-nez. Frank didn’t understand jokes. He had no friends, and the household ran by two rules: nobody touched Frank, and nobody touched Frank’s things.

It took awhile to embrace those rules, and Frank was certainly a challenge, but as Alice settled into her job, she had to admit that life was interesting with him around. It was an adventure, in fact, made better by the presence of Banning’s handsome friend-turned-handyman, Xander, who certainly liked Alice very much. Frank seemed to like Alice, too, (though he sometimes said he didn’t).

Now, if only Alice’s new boss did…

Imagine what happens if you’ve got a handful of BBs, and you throw them into the air. That’s kind of what it’s like to read Be Frank with Me – and that’s okay.

To be sure, the book scatters: author Julia Claiborne Johnson’s main character, the boy to whom the title refers and who drives this book, caroms from subject to subject like an out-of-control pinball machine. Johnson stops short of giving him a label of any sort but Frank is the epitome of eccentric, which wouldn’t be nearly as endearing without the character, Alice, who takes the edge out of this story. Her acceptance of his peccadilloes–and her patience–ultimately made me happy.

Though I thought this book ended too abruptly, I don’t think that’s a deal-breaking flaw. The charm of it overcomes that aspect enough that I can recommend this novel; in fact, Be Frank with Me is a book I think you just might love.