Sandy shores, rocky shores, a quick trip to a quiet East End each winter. Those are reasons we all love living on Long Island. More and more, gray and harbor seals are agreeing with us.

“When we started 15 years ago we would see a handful of animals,” said Riverhead Foundation executive director and senior biologist Robert A. DiGiovanni.

Though the foundation is still finalizing 2015 numbers, there were approximately 1,200 seals—about 820 harbor seals and 380 gray seals, counted last March on Long Island and Fisher’s Island. Though gray seals tend to hang out on the East End, harbor seals are regularly seen beaching and swimming all over Long Island. The Riverhead Foundation runs seal cruises out of Freeport through April, and winter walkers along New York harbor, the Long Island Sound, Jones Beach, Long Beach and Hamptons shores have spotted harbor seals.

“Because populations are increasing, you’re seeing seals move around to other areas and spread out more…whether it’s for food or traveling,” said DiGiovanni.

Unlike many of us, who have some serious hibernation goals during the winters, Long Island seals are spotted more frequently during the cooler months. DiGiovanni believes part of this is because that Netflix-and-chill attitude makes the Island quieter, but it’s also because seals are born with fashionable toppers.

“They have fur, they have a blubber layer,” DiGiovanni explained. “It’s really the blubber layer that protects more so than the fur. Think of it as a winter coat.”

Spotting seals from a safe distance has become a perfect cure for cabin fever. Unless you’ve been living under a rock or don’t have a Facebook page, you’ve likely seen a photo album or two of a friend that’s gone on one of several seal sighting tours this winter. In addition to the Riverhead Foundation’s seal cruises, the Coastal Research and Education Society of Long Island has hosted walks on Cupsogue Beach so people can, with binoculars, see seals in their elements on the bunker and sandbars off the South Shore. 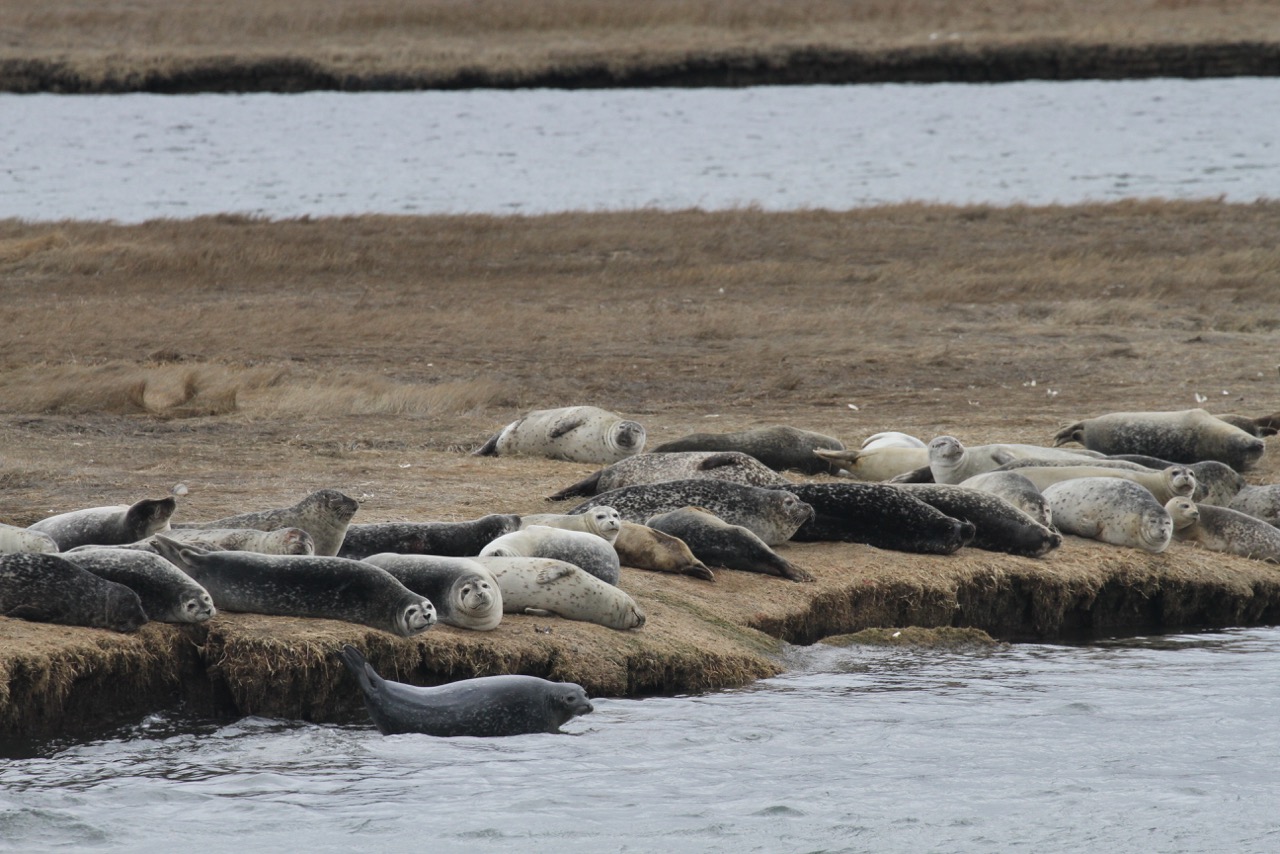 If you see seals on the beach, don’t try to chase them back in the water. “It may have been trying to save its energy,” DiGiovanni said. image: riverhead foundation

“There’s always a wonder around what’s going on in our backyard and how we can co-exist with these animals and what we can learn about them, so there’s always been a need for that,” DiGiovanni said.

With seals growing in population and calling several beaches around Long Island home, the Riverhead Foundation has used seal cruises to educate the public about our co-habitants, including how to act if they spot a seal while on their own.

“If you have an animal who notices you on the beach, you’re probably too close,” DiGiovanni said. “These animals are near-sighted and it could impact what they’re doing. We suggest 50 yards back from a marine mammal on the beach.”

That’s not just a recommendation. It’s federal law to stay back 50 yards (150 feet) from marine mammals like seals and sea turtles. Earlier this month, a sick seal died in Montauk after the public petted it, put it back in the water and wrapped it up. A seal, who could bite a person to defend itself, might be injured, a newborn pup or resting after a long swim and trying to get them to go back into the water could cause more harm than good.

“It may have been trying to save its energy,” DiGiovanni said.

If you want to help an injured seal, DiGiovanni recommends calling the Riverhead Foundation at 631-369-9829, staying back from the animal and keeping dogs and other people away.

“From a safe distance you can take a picture and send it to sightings@nullriverheadfoundation.com. Then we can get a sense of the situation, the animal’s behavior, how it’s presenting, how it looks,” he explained.

Seals are being spotted all over now, but don’t take these adorably chubby mammals for granted.

“All the environmental conditions have some impact on the seals. Marine debris from plastic, bottles, balloons, fishing lines, even the lines from helium balloons can be detrimental, so it’s really important to us to remove them from the environment,” DiGiovanni said.

As part of the Riverhead Foundation’s Pick-It-Up initiative, volunteers pick up debris on Roanoke Beach in Riverhead, Fire Island National Sea Shore, Crab Meadow Beach Park in Huntington, Cedar Beach in Mount Sinai and Ponquogue Beach in Hampton Bays on the first Saturday of every month. It’s important, DiGiovanni believes, because healthy seals and marine life are a sign of a healthy Island.

“I personally believe you want to live in a place that’s healthy,” he said. “A healthier environment means there’s food around, there’s a friendlier environment for us and the animals. That’s why people go out to the beach and relax and now you have these animals you can see as well.”