In the rare hours when Fifth Season is not bustling, chefs Erik Orlowski and John Urbinati hunker down in a quiet corner to brainstorm. The co-owners meet at the start of each season to hash out the restaurant’s menu, but in contrast to the ego-driven dishes of many star chefs, their recipes represent a democratic melding of the minds. “We each have our strengths and we have our not-so strengths and those things help elevate us…it’s a 1+1=3 kind of deal,” Urbinati said.

The duo first teamed up when the restaurant made the move from Greenport to Port Jefferson in 2008. The new dining room was double the size and the original owners, Orlowski and his wife Jeniffer, knew they’d need extra help. Urbinati and his wife Deborah already worked at Fifth Season and seemed like a natural fit. “They’re as equally a hardworking couple as the two of us, so we asked them to partner up,” Orlowski said.

Urbinati’s proclivity for organization complements Orlowski’s freeform creative mindset. “John’s great with numbers and he basically took on overhauling our complete order list and getting the best quality at the best prices.” That gives the team more creative freedom to play, but
still stay on budget. As the restaurant’s founder, Orlowski can remain focused on the big picture while his colleague handles the practicalities. 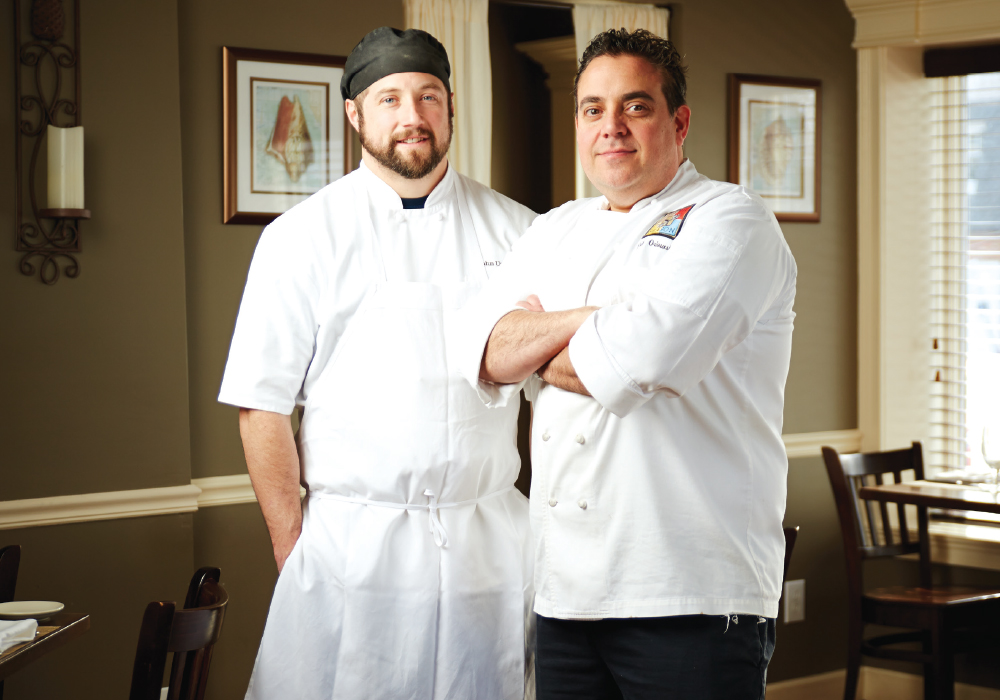 If one item on the menu were to characterize their collaborative spirit, it would be the pan-seared duck breast. The fowl comes from Crescent Duck Farm in Aquebogue, but it’s the accompaniments—roasted squash with a walnut and fig wild rice pilaf and maple gastrique—that typifies their individual contributions.

“One of us might suggest a dish and since we’re both confident in each other’s tastes and preferences, we know that someone can tweak it, make it a little better,” Orlowski explained. For the duck, Urbinati suggested the wild rice, knowing his favorite earthy grains combined with a nutty flavor would complement the meat. Then Orlowski, who loves the sweet and sour contrasts of a gastrique, devised a bright and tangy sauce to cut through the richness and round out the entrée.

But the evolution of a dish doesn’t end there. For gluten-free options, several of the selections have been given a no-wheat twist. There’s even a separate gluten-free fryer for ingredients battered in rice flour. It’s all part of the duo’s view of the kitchen as a culinary cooperative