Not many rock bands have a dessert named after them. But there’s a Midnight Mob Lava Cake on the menu at Revolution Music Hall in Amityville. Midnight Mob—vocalist Blackey Deathproof, guitarist Mickey Squeeze, bassist Carly Quinn and drummer Beatz—originated in the suburbs of Massapequa (which is known for the likes of Brian Setzer, Dee Snider and the Baldwin brothers). Growing up on Long Island, frontwoman Blackey Deathproof was listening to the music of Led Zeppelin, Alice in Chains, The Clash, Jimi Hendrix, Metallica, Elton John and Black Sabbath. “There’s something about swampy blues that grabs me,” said Deathproof, who is also influenced by Etta James, Beth Hart and Iggy Pop.

Midnight Mob cuts through genres with a blend of punk, metal, blues and soul. The band’s live shows are so electric that they impress famous musicians like Guns N’ Roses/Velvet Revolver bassist Duff McKagan, who praised the Mob after seeing them open for Jane’s Addiction at a CBGB Music & Film Festival.

The hard rock foursome has released a full-length and three EP’s since their inception in 2009, and they’re currently working on a video for the song “Ghosts,” off their latest EP, Honest Brutal Glorious. Blackey Deathproof discussed the band’s latest album, live experiences and what Duff McKagan told The Mob after he saw them perform in Times Square.

Long Island Pulse: What influenced the lyrics and music on your latest record Honest Brutal Glorious?
Blackey Deathproof: A series of events basically occurred at the time our original drummer left. I received a letter from a fan saying how much they looked up to me and how much I was an inspiration. It filled my heart and crushed me all at the same time. Secretly, I was a disaster and dishonest with myself. That’s when I decided to go completely sober. During this process I had to walk away from people, others distanced themselves from me, and some helped me. The lyrical theme is the journey of accepting this situation, confronting it head on and coming out larger than life on the other side. Sonically, we were finally able to explore all the genres we wanted to. We were also able to approach the writing and musicianship from a more mature perspective. We had agreed to challenge ourselves. It was time to put on those big boy pants this time around. 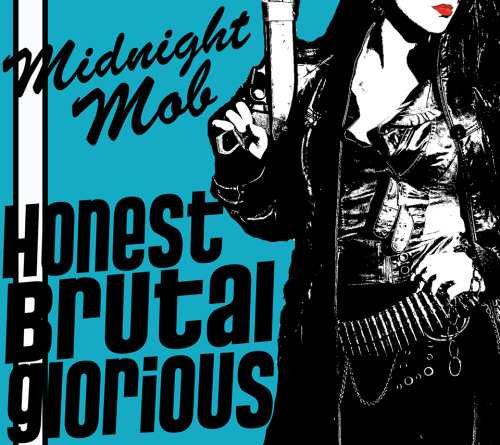 Pulse: What’s been your most exciting live experience so far? Who would you most like to tour with?
Deathproof: I think it would have to be performing our acoustic song ’Stay’ at the Gramercy Theatre in NYC for a packed house. So many times you play dive bars and you can hear people having full blown conversations during softer songs in your set. We were daring and decided to open our set that night with an acoustic track—only me and Squeeze on stage performing in front of 500 people. The planets must have aligned or something because you could hear a pin drop in that room. All you heard were camera clicks. It was so cool to have a packed room there for you and nothing else. It felt really special. In regards to who I’d most like to tour with, it would be a toss up between Foo Fighters, Iggy Pop and Iron Maiden. All three bands have incredible live performances, seem like very genuine people and have a ton of knowledge for us to absorb.

Pulse: Did Guns N’ Roses bassist Duff McKagan approach you after a show?
Deathproof: Yeah, it was rad! We opened up for Jane’s Addiction in Times Square at 11am for the CBGB festival. After we were done playing, there was Duff and he said we were awesome and that he was impressed at the energy I put out there at that time in the morning. He was such a nice guy and so tall! Then later that week we were looking at photos from the show and he was in the background in a bunch of them.

Pulse: What can we expect to hear at The Crooked Rail on Saturday?
Deathproof: The show at the Crooked Rail is our friend’s show, Last Turn Off Broadway. It’s basically just a big local rock ‘n roll party. Our sets have been predominantly the new material, one cover and a sprinkling of the older material. When we do the song ‘Black Mamba,’ we usually have Nick Fargo from the band Mother come up and do the vocals with me, but I’m not sure if that’s happening this time. My favorite song to perform live is ‘Run for your Life!’ There’s just an insane amount of energy as well as peaks and valleys. It’s punk rock with dance beats, Sabbath beats and backing vocal anthems.