On April 22, appropriately Earth Day, countries will have the opportunity to start signing the Paris Agreement. Negotiated during the 21st Conference of the Parties of the UNFCCC in Paris and adopted by consensus on Dec. 12, 2015, the plan aims in part to limit the global temperature increase average and reduce carbon dioxide and other greenhouse gas emissions while allowing for flexibility based on countries’ individual financial capacities. If at least 55 countries pass it by April 21, 2017, the agreement will become legally binding and could be an important step towards halting climate change.

“Battling climate change is one of the biggest global issues that our generation will face,” said Citizens Campaign for the Environment executive director Adrienne Esposito.

With Earth Day coming, and a Presidential election that could have major impacts on the battle to stop climate change looming, I looked into what everyone should know about climate change.

Humans Are Largely to Blame

If there is conclusive evidence from independent scientists, it begs the question: why do people deny climate change exists?

Esposito offered one possibility: “I think they just can’t understand how humans can impact a global ecosystem.”

Humans, Esposito said, are in fact to blame for the vast majority of climate change. In 2013, carbon dioxide was responsible for about 82 percent of all US greenhouse gas emissions from human activities.

There’s no eraser large enough to undo what has already been done to the environment.

“A large fraction of climate change is largely irreversible on human time scales,” a 2013 assessment report from the Intergovernmental Panel on Climate Change (IPCC) stated.

…But We Can Make Changes

We can take actions that can mitigate or at least slightly diminish future issues. “The biggest thing and most valuable thing we can do is to stop burning antiquated fossil fuels of the past to clean, renewable energies of the future,” Esposito said. First, Esposito would like to see more support for offshore wind. “We have three very old power plants on Long Island. Port Jefferson, E.F. Barrett [in Hempstead] and Northport, so we can plan to phase them out in exchange for offshore wind farms with battery storage, solar farms and other growing renewable technologies.” She also recommended a greater push for energy efficiency, such as getting rid of heating systems in offices that use fossil fuels and manufacturing cars with increased miles per gallon of gas.

In November, images of a melting glacier in Greenland swept across the Internet. But what’s going on thousands of miles away could impact the entire world. If the glacier melts completely, and it’s 95 percent smaller than it was in 2002, it could cause global sea levels to rise as much as 18 inches in the years to come. “People think it’s just an ice sheet melting, but it’s happening in everyone’s backyard,” Esposito said. “It’s intensified rain, the sea level rising, weather pattern shifts, drought, change in agriculture. It’s all happening right around us.”

…And Long Island is Vulnerable 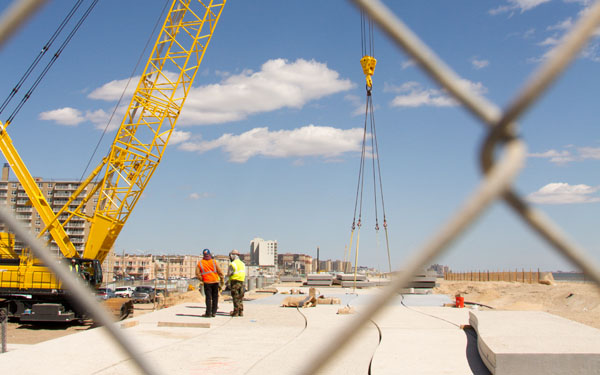 Long Island is a hub of agriculture and farmland, meaning the economic impact could be grave on our local farmers. And of course, as much as we love living on a beach, the risks are only intensifying as climate change accelerates. The sea level has risen about five inches in the last 50 years. “What that means is greater salt-water intrusion into the aquifer, increased flooding of wetlands and the mainland, which makes us much more vulnerable to storm surges like Sandy or any nor’easter,” Esposito warned. “The other part is that it shifts weather patterns and we get these more intense rains which also causes localized flooding and property damage.” The hospital in Long Beach City that was destroyed by Sandy just got a new emergency room last year, the Rockaways boardwalk will finally reopen this summer, the Bay Park sewage plant that was inundated with several feet of water is still being rebuilt and of course there’s the large clusters of homes right by the shores. “Infrastructure is not prepared for this…the bottom line is because we are an island, it just makes us exponentially more vulnerable to storm surges and floods.”

Without action, Esposito said experts predict the global temperatures could increase by 5 to 10 degrees by 2100. “If we do nothing, it will impact everyone’s quality of life economically and with our health. The cost of food, health care, flood insurance [could rise].” Storm and heat-related deaths would likely increase, and the quality and amount of agriculture could decrease, so it’s not just about making the environment healthier, it’s about the health of you and future family members, too. “These actions…will transition us for a healthier future.”

It’s Something That Should Unite the Globe

There’s a saying: one earth, one chance. Though we may not agree with other countries on foreign trade or economics, the world is all of ours, which made the 2015 United Nations Climate Change Conference and resulting Paris Agreement proposal so important. “We have opened a new chapter of hope in the lives of 7 billion people on the planet,” Indian Union Minister of State for Environment, Forests and Climate Change Prakash Javadekar said when the Paris Agreement was reached. “We have [the planet] on loan from future generations. We have today reassured these future generations that we will all together give them a better earth.”

The Presidential Election is Vital

“The United States can and should be a leader on climate action,” Esposito said. “We need a presidential leader who understands science and is willing to take action.” She fears that if the United States takes a step back, other countries will follow and believes a greater focus on improving climate change can create higher-paying technical jobs that will help the country economically.

Where do the current leading candidates stand?

Bernie Sanders would introduce the Clean Energy Worker Just Transition Act. He would aim to reduce US carbon pollution by 40 percent by 2040 and 80 percent by 2050 by putting a tax on carbon pollution, repealing fossil fuel subsidies and making massive investments in energy efficiency and clean, sustainable energy such as wind and solar power. Additionally, Sanders plans to propose a Clean-Energy Workforce with 10 million jobs by creating a 100 percent clean energy system.

Donald Trump denied climate change existed in September, and Ted Cruz has repeatedly stated that climate warming is “on pause.”