THE MERCEDES-AMG GTS is the most significant car Mercedes has built since the original 1954 300SL. Such a bold statement may raise the eyebrows of spec-box scorekeepers and the accountants at factory headquarters. But just one drive demonstrates that Mercedes is back in the sports-car game. It’s the first genuine contender since the final 300SL roadster rolled off the line in 1963. Since that time, SLs—wonderful cars in their own right—have been less sport lightweights, more the gentle-person’s boulevard cruiser. And while the Mercedes SLR McLarens and most recent SLS AMGs have probed the potential for a Mercedes-branded supercar, they were too big, too heavy and too expensive to attract customers ready for a sporty daily-driver.

FIRST, A NOTE ABOUT THE NAME. In an effort to better differentiate a growing family of models and target customers, the company has officially declared three brands under the Daimler umbrella: Mercedes-Benz, Mercedes-Maybach (a re-branded super-luxury S-Class) and Mercedes-AMG, the Affalterbach-based factory in Bavaria that touches almost every M-B model with a high-performance variant. The new GT S is a stand-alone AMG model, the second sports car developed entirely by AMG.

The first was its immediate predecessor, the SLS AMG, which captivated the automotive world back in 2009. Like the SLS, the new GT S was con- ceived from a clean sheet, but without obligations to the “mandatory” retro-references, the GT S comes across as a more focused exploration and keeps “sports car” objectives firmly in its sights. Such a clear design necessitates that handling dynamics and packaging trump cubic inches and gross power output.

The AMG GT S’s smaller size, lighter weight and 50/50 balance are major components of the sporty equation, matched with a new engine that is itself smaller, lighter and ideal for the relatively compact GT. The 4.0-liter, twin-turbocharged V8 makes 503 hp at high rpms, and more importantly, a respectable 479 ft lbs of torque at just 1,750 rpm. Deep-V turbochargers reduce lag and are nestled between the two cylinder heads. Aerodynamics are enhanced by front and rear diffusers and a retractable rear spoiler that extends when the car is traveling at speed, something this spritely sportster encourages.

With a curb weight of a little over 3,600 lbs, the AMG GT S is in the sweet spot, at the high end of competitors like the Porsche 911 and mid-way for a Jaguar F-Type. This AMG is not about brutal power and straight-line acceleration, but finesse.

Lightweight aluminum space-frame construction, a front mid-engine layout and a rear-mounted 7-speed, dual-clutch transmission are the recipe that lends the GT S such a balanced weight distribution; it accelerates and corners almost like a mid-engine car. The transmission’s shift response, while less than seamless in lower gears during hard acceleration, remains Mercedes’ best yet, and provides a firm transition between the engine’s power and the rear wheels. Dial the console-mounted control knob to sport or sportplus, shoot this Silver Arrow into curves and power out—the car instills confidence and never intimidates, unlike the engine’s exhaust note. 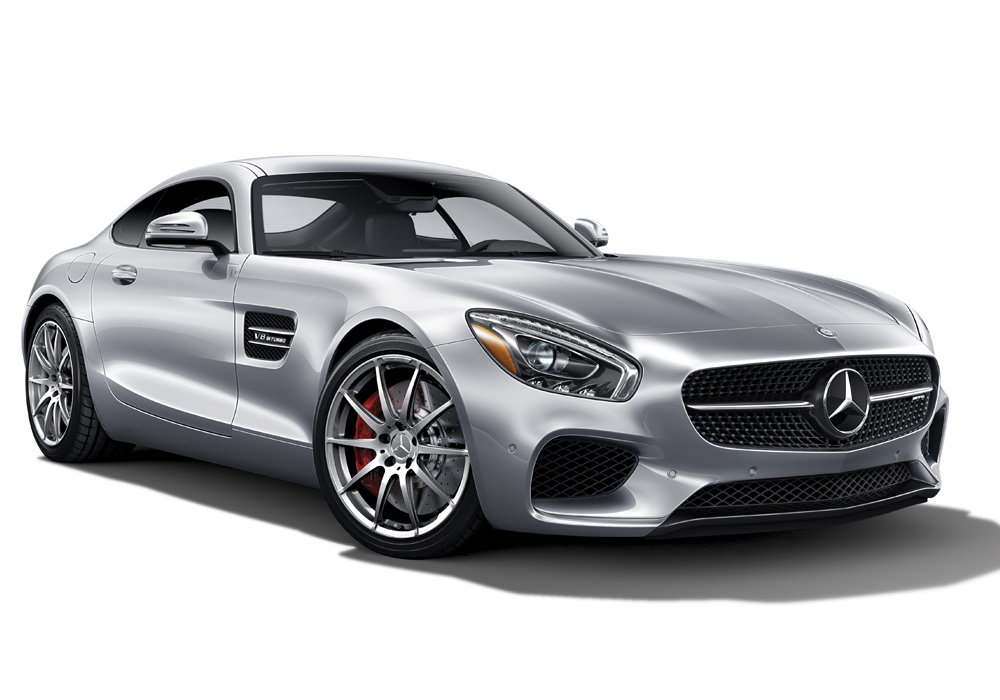 Wicked looking, the GT S gets more stares than any Mercedes in recent memory. And if owners choose the nearly-$10,000 Solarbeam Yellow Metallic paint option, attention is assured and unavoidable. The shape is classic sports car, with a long front end, short overhangs and stubby rear. The fastback rear-three-quarter view is uncannily 911-like, but features a hatchback trunk that is more accommodating.

Maneuvering into the cabin, driver and passenger will become close friends, though separated by a conspicuous center console that establishes turf and adds a sporting feel to the proceedings. The windshield is wide and low, and combined with substantial A-pillars, can mimic the view from a concrete WWII pillbox. For some, the cabin may be slightly claustrophobic, but it is lavish and well laid out, with excellent seats and superb execution of details, from instruments to ancillary controls. Materials and finish are, as usual, up to the highest Mercedes-Benz levels of quality. Even at the $129,900 base price, the GT S sets a new standard for the first true sports car to wear a silver star in more than half a century.