The most personal designs are often inspired by a homeowner’s favorite possessions, those treasured keepsakes that mirror a unique style and taste. Such was the case for the master bedroom of a local fashion editor when she enlisted designer Keith Baltimore. He created a space that reflected her sartorial obsession: a collection of vintage scarves and accessories, which inspired both the glamorous style of the room and its accent color, a vibrant orange reminiscent of French brand Hermès’ signature hue.

Related Content: How to Stylishly Decorate Your Home With Travel Mementos

Baltimore began with the room’s existing wardrobe, lacquering it in a warm pumpkin shade with brown piping, much like a gift box from the famous French fashion house. “You almost want to open up that box and see if a Birkin bag is in there. So I chose that because of [the owner’s] sense of style and her fashion acumen,” said the Port Washington-based designer. The massive 10ft by 6ft cabinet is the focal point, yet due to the soaring, vaulted ceilings and muted blue and gray color scheme in the rest of the space, the orange color doesn’t overwhelm. “It’s kind of tranquil. It’s not red. It doesn’t feel like the music’s blaring because there’s this color. It becomes a little more soft.” 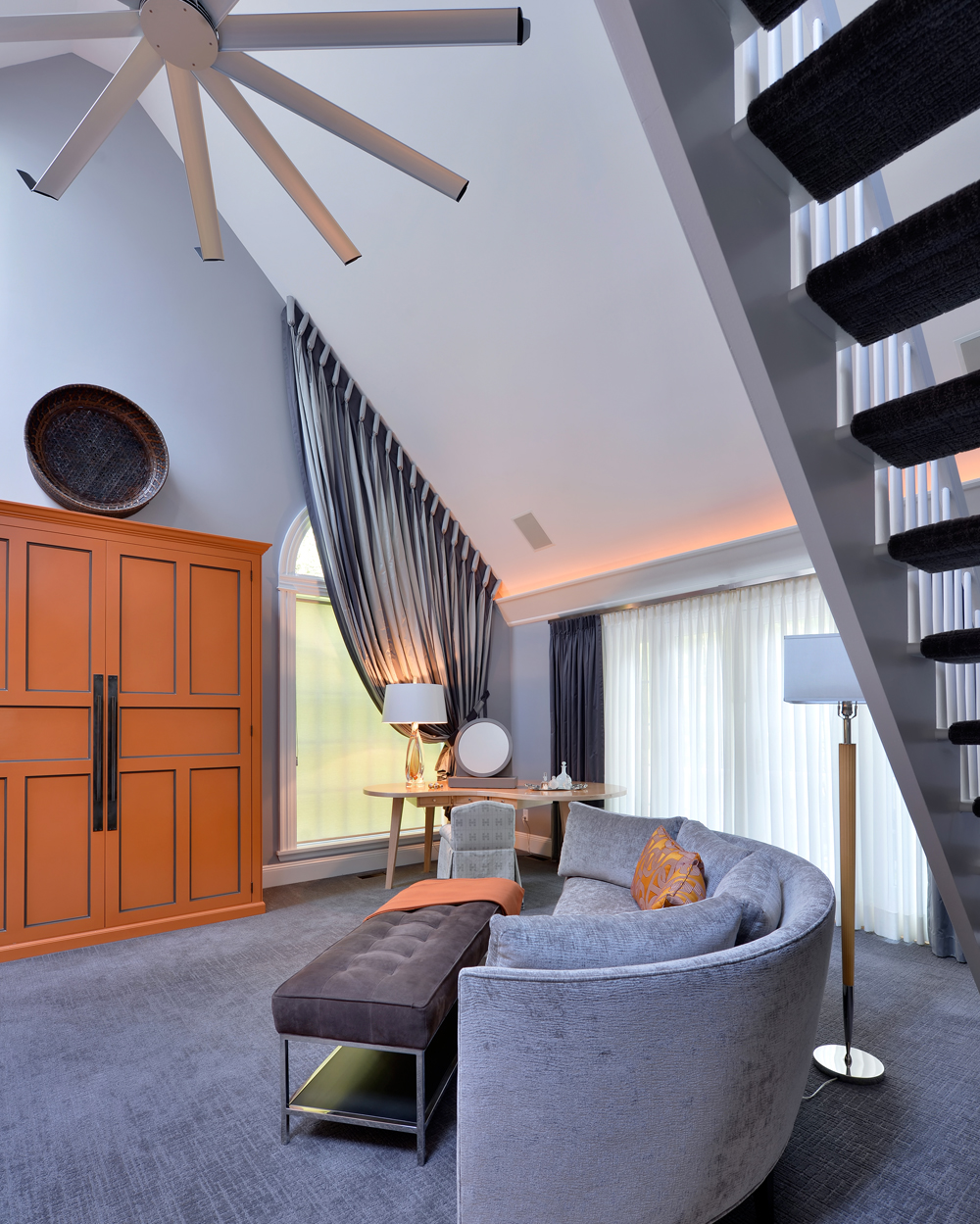 Baltimore lacquered the wardrobe in a warm pumpkin hue that’s eye-catching, but not so bright that it disrupts the tranquility of the bedroom.

Baltimore also incorporated the homeowner’s vintage Louis Vuitton trunk and Asian dresser, lending a retro vibe to the otherwise modern space. Clean-lined pieces, like the pared-down version of a four-poster bed, tie together the past and present. This feeling carries over into the vanity area, where a dramatically draped curtain frames a curvaceous desk with a tufted chair, a vignette reminiscent of vintage Hollywood.

“It was very glamorous and felt like a time gone by where you had the time to take a minute, react, put on makeup…It added this whole 1940s glamour vibe to the whole room.” Crisp, white bed linens outlined in black and throw pillows with an elephant motif enhance the sense of Hollywood Regency-style with a modern edge.

One of the challenges was working around the open staircase that leads up to the walk-in closet. This unconventional layout meant a traditional seating area would be hard to arrange, so Baltimore opted to play with geometry. The curve of the couch makes the placement of the furniture at the base of the stairs seem less forced. “Choosing an amorphous shaped sofa and makeup vanity gave it this idea that everything was floating. It makes the use of space very creative.”