Jason Stranahan, a physical education teacher at Manhasset High School during the 1930s, introduced a new sport to his pupils. It was one he picked up as an undergrad at Union College in upstate New York, consisting of a rubber ball and crooked wooden sticks. The game Stranahan was teaching his students was lacrosse, and once it was unleashed upon an unsuspecting group of teenagers, Long Island would never be the same.

Fast forward a few decades and lacrosse has become as synonymous with Long Island as heavenly bagels and snarling traffic. Every kid from the Gold Coast to Orient Point picks up a stick at some point—the Island has been transformed into a lacrosse factory, each year mass-producing a new bumper crop of elite players. High school teams across Nassau and Suffolk are consistently ranked among the best in the nation and college rosters are littered with Island natives. But the apex of any sport is the professional level, and that’s where New York’s pro team—consisting of many born and bred Long Islanders—has shown just how dominant our region is at the sport with the rubber ball and crooked sticks.

Related Content: The New York Team You Need to See

The New York Lizards were one of the founding members of Major League Lacrosse when it was established in 2001, even winning the inaugural championship. Since then, they have been a mainstay in a league that has seen several teams fold and have consistently drawn strong crowds to their home field at Hofstra’s James M. Shuart Stadium. Yet for all their early success (four championship appearances in the first five years), the Lizards went 12 years without winning a title. Last August, that all changed.

After finishing first in the regular season and eking out an overtime win in the semifinals, the Lizards made their first championship appearance in 10 years. They entered the fourth quarter trailing by one, but then reeled off the game’s final four goals to beat the Rochester Rattlers, 15-12, and take home the title.

On a team filled with as many star players as the Lizards have, it’s easy to think winning might be the norm. Yet for most the ultimate prize had always eluded them.

“When we finally won, it was an enormous relief because some of us never won anything at any level,” 2015 league MVP Greg Gurenlian said. “I really started to feel like maybe I was just the common denominator, that no matter where I went, I couldn’t win the big thing. So it was a huge relief and it was definitely the pinnacle of my career so far.”

Almost as a whole, the team shared the midfielder’s sentiments, attacker Rob Pannell most of all. The Smithtown native’s resume is replete with accomplishments and accolades. After an All-American senior year in high school, he set the rookie record for points in a season as a freshman at Cornell, only to fall in overtime in the national championship. He went on to become the Ivy League’s first ever three-time Player of the Year and won the Tewaaraton Trophy, given to the best college player in the country. When Pannell walked off the field after his final game at Cornell, he had scored more points than any men’s lacrosse player in NCAA history. Still, he had never won the last game of the season. 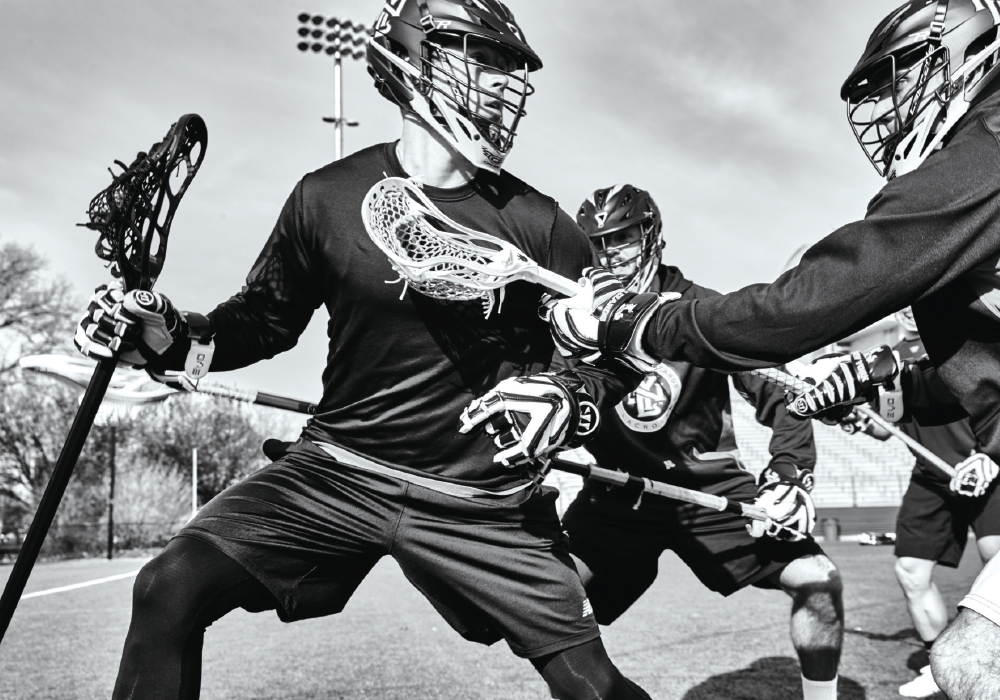 Tommy Palasek (left) is a main contributor to a potent Lizards’ offense that led
the league in goals last season.

“[Losing the national championship] was extremely difficult. The main motivation for the years to come was just to get back to that point and have a chance to win a championship. That was really all that mattered to me,” Pannell said. “To finally get there, hold that trophy and have that championship, it took a weight off my shoulders. When you’ve played for so long and haven’t won that championship at any level, you start to question a lot of things. It was a big relief—relief more than anything—but obviously [I was] excited as well.”

Winning is one thing, but bringing a title back to a place that lives by the game was extra meaningful. “Before I started playing here, I heard people from Long Island talk about [it] as this place everyone has a ton of pride in…I can see why,” said goalie Drew Adams, a Pennsylvania native. “We get some passionate fans, we get people that really follow our team and follow the sport. It makes it a fun place to play.” Even a New Jersey guy like midfielder Jerry Ragonese has learned to love New York. “It’s awesome. This is one of the hotbeds of lacrosse in America so it really doesn’t get much better. You cut out the traffic and the tolls, I’d be out here all the time.”

But for locals, playing for the hometown team holds more significance. “Growing up it was certainly a dream of mine to play for the Lizards,” Pannell recalled. “I remember going with my dad and brother to the games, getting autographs, standing along the fence, watching the games as closely as I could…playing for New York is a dream come true.”

Getting the championship monkey off their back was satisfying but not every Lizard previously missed out on the glory. Midfielder Paul Rabil was traded to New York prior to the 2015 season and was a key contributor to the title run. Considered by many to be the best player in the world, the three-time All-American at Johns Hopkins won two NCAA titles and a MLL Championship in 2011 with Boston. His experience playing on championship teams offered a keen insight into what went right last year. “We had a great culture, great chemistry from top to bottom. It was just having a great group of guys that were plugging away each day trying to improve and challenge each other with the singular goal of being in the best position to win a championship.”

“Plugging away each day” gives the impression that the team practices together each and everyday, much like other professional sports teams. In fact, it is quite the opposite. Pro lacrosse players are for all intents and purposes parttime professional athletes. Though the sports’ growth has enabled many players to make a living on lacrosse-related activities (coaching, endorsements, etc.), the short season and lower wages forces them to become some of the hardest working athletes in any sport: paid to ply their trade during the season, but required to earn a living for the remainder of the year. In fact, even during the season many players are working a 9-5.

“It’s extremely challenging,” Pannell admitted. “I could be in Nebraska one day and then fly into the game the next day after working a camp all week. That’s exhausting, but it’s what you have to do. The fact that guys work full-time jobs and still dedicate themselves to lacrosse, it says a lot about the character of the guys that play in the league.”

The double duty makes it harder to remain in peak form, but not impossible. “It’s a self-maintenance league. You’ve got to take care of yourself. At the end of the day, when you show up with the rest of the guys, they’re going to know if you weren’t taking care of yourself,” Adams said. “It’s really just a matter of being disciplined and making sure you’ve done what you needed to on your own to put yourself in a position to be successful.”

As they enter this new season, the team continues to use the unrelenting work ethic that has become engrained in its DNA. “We’ll continue to be grinding out in practices and pushing each other to improve everyday,” Rabil said. That attitude, coupled with a minimal turnover in personnel, has spawned a singular goal for the team in 2016. “It’s championship or bust,” Gurenlian proclaimed. “I think the sky’s the limit for us, we just have to make sure we get it done.