“Atoll” is the only English word derived from Dhivehi, the official language of the Republic of Maldives. Located exactly halfway around the world from New York just about as far away as possible the series of ring-shaped islets is a special place worth the time required to reach it. Maldives is rarely in the news other than as a case study about global warming and rising seas threatening the low-lying islands. But for now, those same islands, barely a few feet above the water’s surface, are home to numerous activities that attract adventurous travelers whose long flights are rewarded with some of the world’s most beautiful scenery. And like Fiji, St. Barths, Seychelles and other exclusive island destinations, Maldives is also ideal for relaxation without intrusion.

The seduction begins on the approach to Ibrahim Nasir International Airport; the island panorama of deep emeralds set in turquoise rings strewn across a sapphire sea is a striking sight. The airport occupies its own island just a five-minute boat ride from the country’s miniature capital, Malé, home to about half the country’s 335,000 people.

The unique geography of Maldives has given rise to a tourism business model where uninhabited islands are leased to resort operators who in turn build their visions of the Maldivian dream vacation. Each island essentially becomes a private island resort. The only one with more than one hotel is Malé, one of the smallest of world capitals in size yet also one of the most densely populated. The tiny city makes an interesting daytrip for visitors staying in resorts in the South Malé Atoll, which is more-or-less in the center of this country spread across 500 miles of ocean. The one museum on the island is currently closed, but interacting with the Maldivian people is an education in itself. Isolated in the middle of an ocean, they are by nature and necessity resilient, industrious and resourceful.

As would be expected in this nation of more than 1000 islands that comprise 26 atolls, water dominates local life. Maldivians are a traditional seafaring people who have lived in partnership with their ocean for generations. Skilled fishermen read the water like a book—a vital ability in a place where daily sustenance for many depends on the day’s catch. Other than for visitors who come with their own yachts, the notion of island hopping or sightseeing over a period of time seems anathema to a stay here, where retreat into one of the many deluxe resorts is the norm. 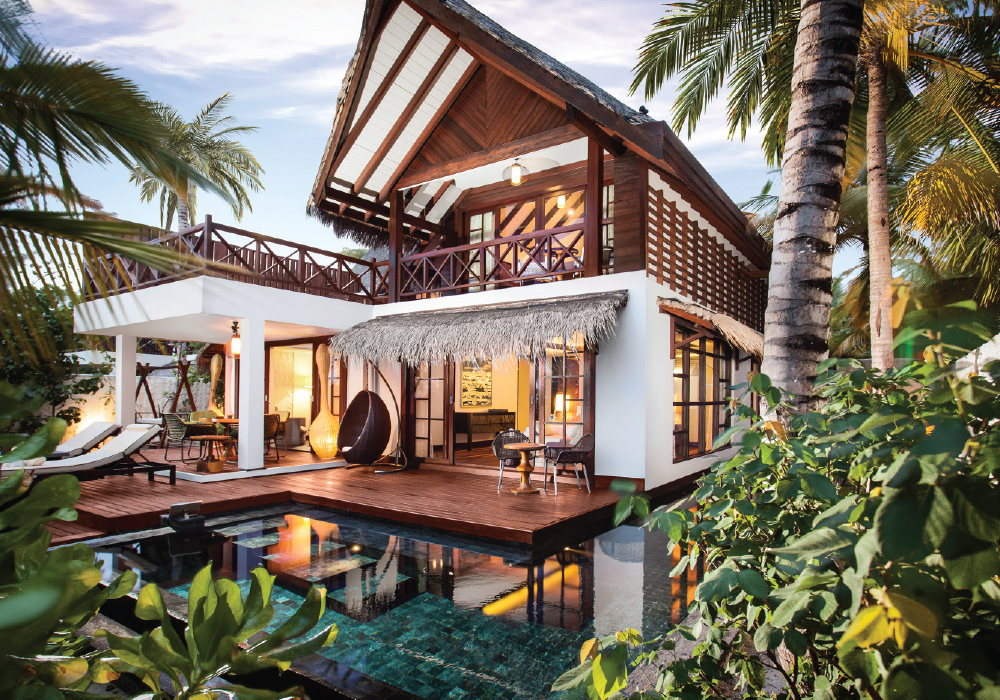 Still, yachting and sailing is also one of the great pleasures of vacationing in Maldives and not to be missed. Any resort worth its sea salt maintains its own yacht available for private transfers and for guest use on daytrips to uninhabited islands, where they can be dropped off and picked up as they wish. Though some prefer a more rustic experience aboard a dhoni, the traditional fishing boat of the region, often built from coconut palm timber, a local resource.

There is a bit of politics involved, though. Naturally enough, no resort wants to ferry its guests to a competitor’s property to spend time and money. And admittedly, the landscape and seascape do not vary much between islands, so there is no feeling of missing out if you do stay on one island and one island alone. Finding an idyllic spot to relax and play isn’t the hard part, it’s choosing which is best.

Two exemplary locations are part of the Jumeirah Group’s global portfolio of luxury hotels and resorts. One of the few companies to maintain more than a single property in Maldives, Jumeirah operates two resorts here, Vittaveli and Dhevanafushi. Though separated by 250 miles of ocean, the resorts share the same level of excellence in accommodations, fine dining and activities. Both have recently unveiled new three-bedroom Royal Residences, which are perfect for families or groups of friends. Dining experiences range from the simple pleasures of a picnic on the sand to once-in-a-lifetime special occasions.

The Swarna Journey dinner at Jumeirah Vittaveli’s restaurant Swarna recreates the dining experience of India’s Mughal princes, right down to the 18-course extravaganza of flavors served in private, open-air pavilions accompanied by traditional music. Jumeirah Dhevanafushi’s restaurant, Jora, has a similarly impressive eating excursion, with a one-of-kind setting. The restaurant is part of the resort’s Ocean Pearls complex built above the water, half a mile from land and anchored directly to the ocean floor.

Dhevanafushi resort is located in Gaafu Alifu Atoll, about 250 miles south of Malé. Though it is possible to charter a private yacht for a multiday journey between Dhevanafushi and Vittaveli, located on the South Malé Atoll, the preferred way is to fly either on a commercial flight from Malé to Kaadedhdhoo or by chartered seaplane, which can bypass airports altogether and provide easy transfers from one island directly to the other. 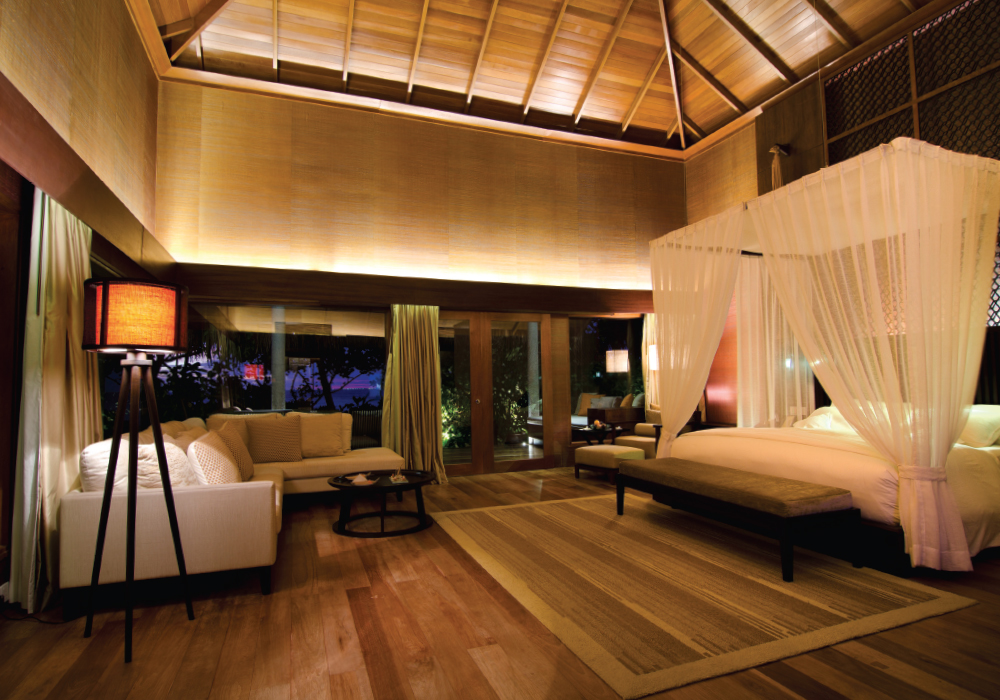 Sumptuous accommodations are the norm in Maldivian resorts.

At both resort destinations, the atmosphere of casual luxury belies the seriousness of the company’s commitment to exceptional accommodations and unforgettable experiences, especially in the water. Vittaveli’s dive center is staffed by a cosmopolitan team of international experts. Dhevanafushi, although the smaller property, is located above one of the country’s best dive sites and has become the hot destination in Maldives among divers in the know.

The pristine state of Maldives’ coral reefs attracts avid divers and novice snorkelers alike, keen to see the native marine life. A vivid palette of primary colors among the corals is matched by the Indian Ocean’s multitude of tropical fauna ranging from angel fish to whale sharks. At Dhevanafushi, underwater enthusiasts can experience the best of both underwater worlds—on one side of the reef are the shallows inhabited by small fish; on the other, the reef drops off precipitously into the open ocean.

It is even possible to experience the aquatic environment while breaking a sweat on terra firma. The glass walls of the fitness center at Vittaveli allow for observing marine life from the treadmill, encouraging an extra mile or two. And just steps away on the beach guests can watch tiny fish and enormous manta rays during a late-afternoon feeding session. At night, the wonders above the water can also be fully witnessed—the sky of above the Maldives is nearly void of light pollution. Vittaveli retains a resident astronomer to take full advantage of the celestial display.

If not traveling by private jet, the best way to make flight time pass agreeably is to fly with an airline that provides superior service in the air and on the ground. It is virtually the same flight time from New York to Maldives whether flying across the Pacific with Cathay Pacific, or across the Atlantic with Turkish Airlines. Both offer superb inflight service and lounge facilities for Business Class and First Class passengers in transit through Hong Kong and Istanbul, respectively.