When the sun’s rays reach out to stroke cheeks, shoulders, arms, legs…time stops. Light punctuates energy moving across breaking waves, making the delicious promise of forever both real and unreal. It’s a whisper. A suspension. But even as it’s happening, the melancholy of time passing casts its shadow. We know, between our urgent laughs and skipping steps, that the moment is as fleeting as the water receding from the shore. 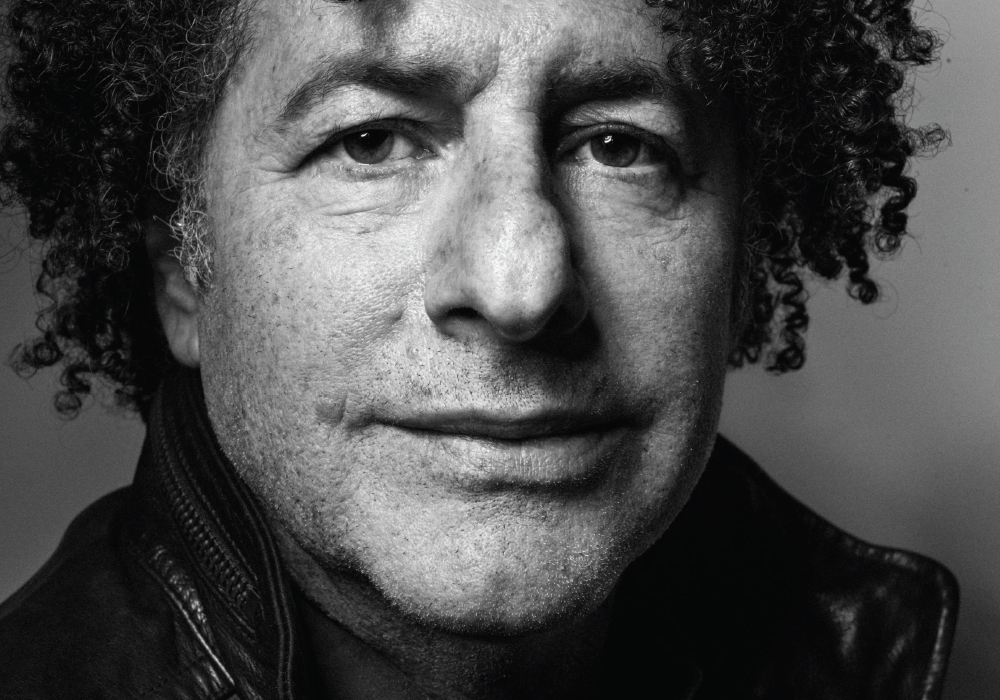 When Michael Dweck created a time capsule for Montauk (The End, originally published in 2004), he developed a photographic narrative that evolves cinematically. Each turn of a page snaps an image to life like a scene recalled from memory. The people featured were the early Montauk surfers, but the real stars are the beach and that most precious moment of knowing that innocence is about to be lost forever.

It starts with the famous cover—a vibrant, beautiful nude running into the surf, board confidently tucked under her arm—and all the following pages deliver on the romance of that myth. But the truth is it’s not really just about Montauk or youth. The End transcends place and genre because it’s about freedom and escape and savoring a moment that is about to disappear. That’s why the book that initially couldn’t find a publisher is now sold on the private market for $10-20,000 or more. This July, Dweck is re-releasing The End with an additional 85 never-before-seen images. 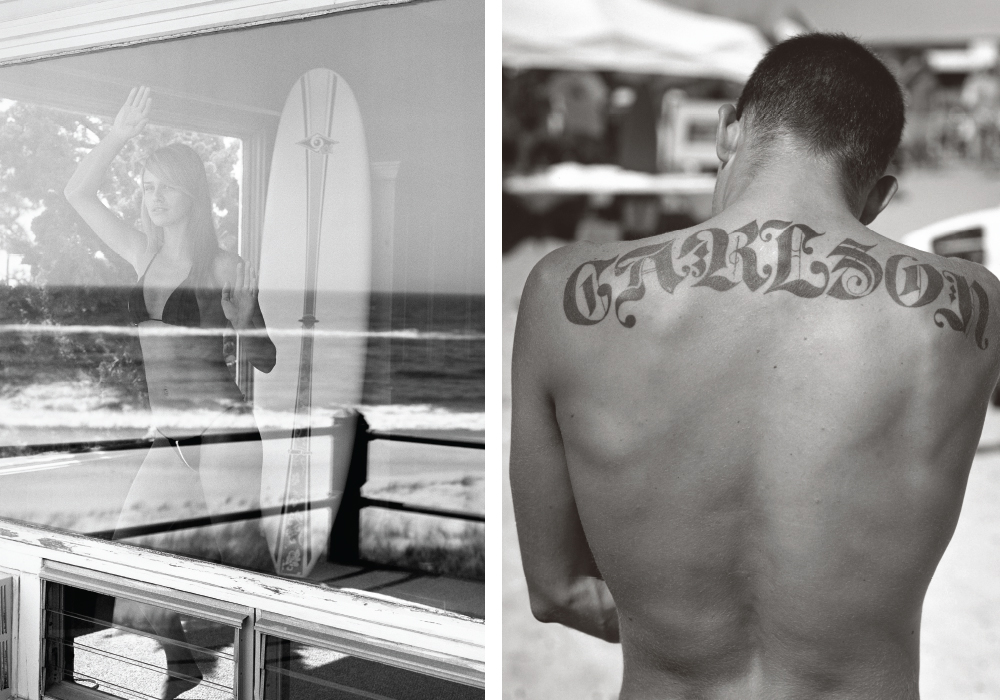 Attending the 1964 World’s Fair in his native New York was a profound experience on the then 6-year-old, and it would have a lifelong effect. The event was a glimpse into the future but also might have caused him to become obsessed with time, and the effects of its passing. And it was there that his parents bought him his first camera. The little plastic blue and orange thing that would shoot 120mm film, the same film he uses today (though the Kodak World’s Fair Flash Camera has since been upgraded).

Location would prove to be even more pivotal in the photographer’s life. Dweck grew up in the grit of southern Nassau County, a stone’s throw from the Island’s famous beaches. “What I learned—by living next to the beaches—was how to photograph using natural light. And I also learned how to photograph people…I was pretty introverted when I was younger. The camera gave me a way to disarm people. I could walk up to any girl I wanted and ask to take her photograph.” But it wasn’t just the people who would catch his eye. “The beach also represented escapism to me. It was a place to disappear…I was constantly there…the beach was always a part of my life.”

Thus from the beginning, the camera became a way for Dweck to engage in the moment. And that coaxing continues to inform his approach. The compositions are immediate and warm, evolving naturally rather than perfectly. And the perspective is alluring, downright flirty. No wide-angle lenses for him. “I like everything to be really close and intimate…when you go through this book, you say right away, ‘I’m in it. I’m here.’”

The Beginning of The End 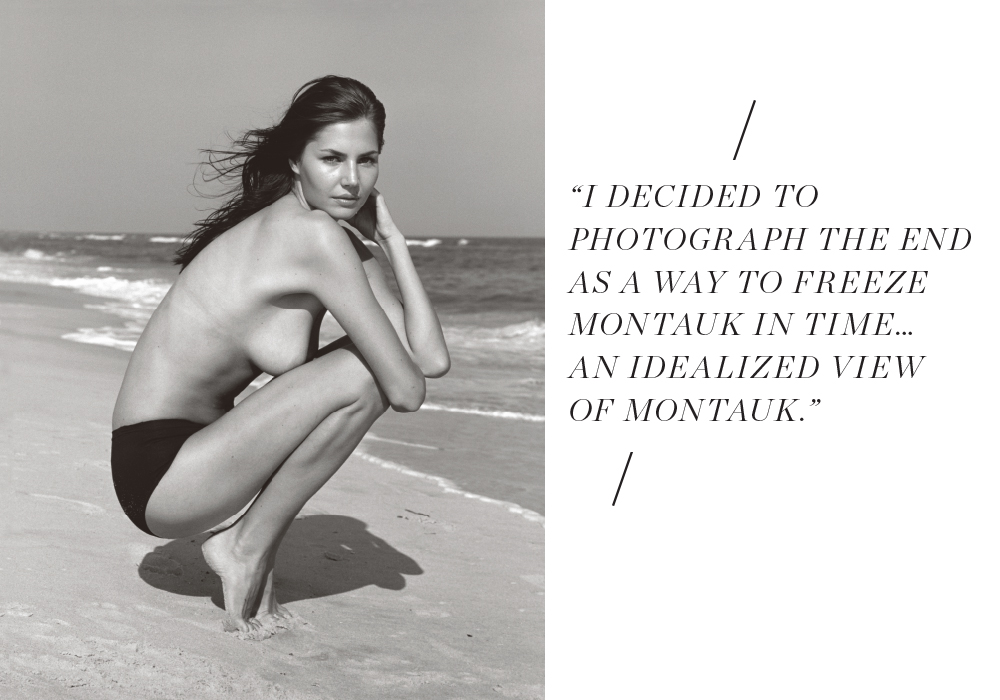 In 1975, when he heard the Stones were recording in Montauk, Dweck and his trombone playing bandmate thought there was only one thing to do: go out there and keep playing until the Stones discovered them. That’s when he happened upon Ditch Plains, already a surfer’s Shangri-La. But on that particular day, no one was there and he fell in love at first sight. A young, earnest, rebellious love ripe with abandon—a spirit that Montauk would come to represent for him to this day.

Over the following three decades, Dweck continued to call Montauk home and finally, “I started to see things change, about 2002…a lot of the familiar faces were leaving. And that worried me. So I decided to photograph The End as a way to freeze Montauk in time…an idealized view of Montauk.” He references the cover—Sonya about to surf naked, a mythical force. “That’s how I see Montauk. A place that’s very much about being 19 years old. It’s a time in your life where…things are about to change. But it’s the best time in your life…The nudity came organically. Although most of my pictures are planned…I only met Sonya the day before. But when we got to Shadmoor Cliffs…the light reflects off the clay and it makes everything look beautiful. Everyone looks tan and healthy, and it just happened. She had never done that before and she hasn’t done it since…that [cover] photograph became so famous around the world because it represents a certain spirit that everyone has within them. It’s being completely free—it’s not a sexual image at all.”

He shot a group of friends for 18 days and spent a year editing, reaching for something that would unfold like a film. Initially, no one would publish it because “surfers don’t buy anything.” But Dweck believed it wasn’t a surf book, it was about escape, something everyone could believe in, and he kept going. “It’s like the myth of the cowboy. You think cowboys have such great lives, they beat the system. They’re living out under the stars, they have no boss. Life is good but, in actuality, cowboys have a horrible life. And it’s similar to surfers. The surfers I know, they’re all nail-bangers…it’s not an easy life, but it’s a life by the sea, which is a beautiful life.”

The book is very much a story, although the characters continue to change and there is no clear beginning, middle and end. And that’s what makes it so universal in appeal: the beach is the main character and the people there are its experiences. The arc is the day: arriving at the beach, preparing to surf, surfing, refueling at the Ditch Witch food truck and watching the sun go down.

The End is a parable for the place he loves by being a parable for something that slips through all our fingers: time. The images, both stylistically and compositionally, are classics but that is not to say he could have accomplished these photographs at any time. Montauk today is not what it was then. And neither is he. “But there are certain things that can stay the same. You can’t change the ocean. You can’t change how beautiful the salt air is—how it smells and how it feels against your skin. And the waves will always be there.” But there’s nothing nostalgic about it—he’s not trying to instruct us towards something bitter or orthodox. “I republished it to say ‘this is how I see Montauk, no matter what time it is. I always see Montauk this way.’ That’s why I added more photographs to it. I brought it forward.

“It’s a way of freezing Montauk in a time that I think lasts forever…Why is this book worth $13,000? I don’t know. But there’s something about this that resonates with people. They want to escape and go to this place.”

A Moment in Time 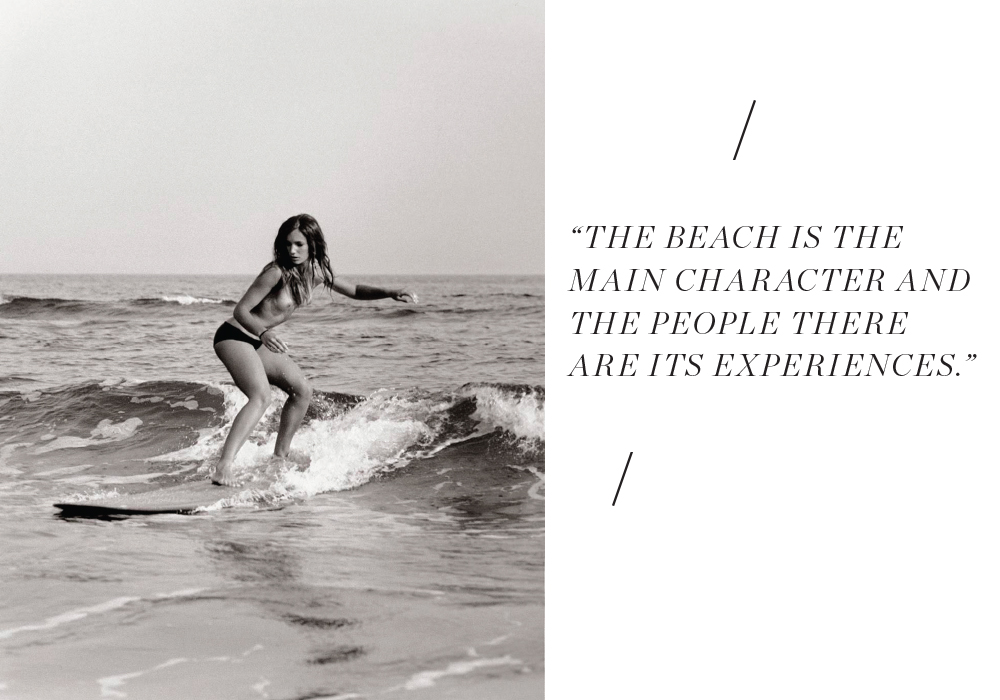 Dweck’s stories unfold like a film—he has a lose script in mind for the shot and once everyone is in place, the action releases improvisationally. It’s also why he doesn’t remember taking specific images—when he gets a contact sheet back two days later, the surprise is a thrill.

“Voyeurism is a tricky thing. Photographs overall can be seen as voyeuristic because it can be seen as ‘peeking in.’ If someone is not addressing the camera it looks like there’s no apparent viewer…I’m very conscience of it looking like the viewer is in that scene. That’s very cinematic…it also works because the photographs aren’t seen in a vacuum…there’s context within a narrative…I’m also really conscience of my selections. First the photograph has to work on its own. Then it has to work against another photograph. And then it has to work before and after another photograph.”

The themes approached in The End continue in Dweck’s other projects, though each one is a separate work. The idea of tribes, of outsiders and of course, time. “What all my projects have in common is I’m trying to capture a place before it changes…When society doesn’t realize what’s important until it’s lost, somebody has to save those things. And maybe it’s the job of the artist to come to the rescue of these things that should be considered, in essence, holy.”

Dweck took to the charge of “rescuing” Havana from the expedient commercial rush befalling on it in recent years. After nine trips to Cuba he released Habana Libre in 2011. It’s a focus on the elite creative class that lives unconfined by governmental stereotypes. It’s a glamorous, free, exotic, hedonistic moment. He showed 96 pieces of work as one of the first American artists to have a solo exhibition in Cuba. “What it showed was the privileged class—the privileged class in a classless society, which should be controversial.” But it wasn’t. There were 3,600 people at the opening, the Castros among them.

Dweck’s current project may seem a distant departure from the indulgencies of young Montauk or the exoticism of Cuba. His Blunderbust focuses on a division of NASCAR stock car driving in Riverhead that may be alive but not very well today. “This project is about the loss of American identity. I’ve been working for the last six years at the Riverhead Raceway. This is a massive body of work. I just finished a feature documentary film. The film is very much about heroes.”

Similar to The End, it’s very personal to Dweck. Growing up in Bellmore, he and his father were fixtures at the Freeport Stadium raceway—it opened in the 1930s as one of the first in the country and the Dwecks never missed a Wednesday or Saturday at the races. Coming back from Montauk one day, he cut through Riverhead and “paid my $15 and I was taken back to when I was 10 years old…the smell of that fuel, that rubbery stuff in the air, the noise and the cars! The cars were the same cars I remember as a kid. They were from the 60s and 70s at that track. I was completely taken.”

His subjects were reluctant at first (also similar to The End). But he forged ahead. It started with cataloguing the cars and the drivers saw him mostly as a nuisance. But Dweck was intrigued by their reticence and held to his pursuit—at their homes and day jobs—to photograph them. Filming them was a natural extension that evolved into a massive film with a crew of 40 and 25 cameras at once. 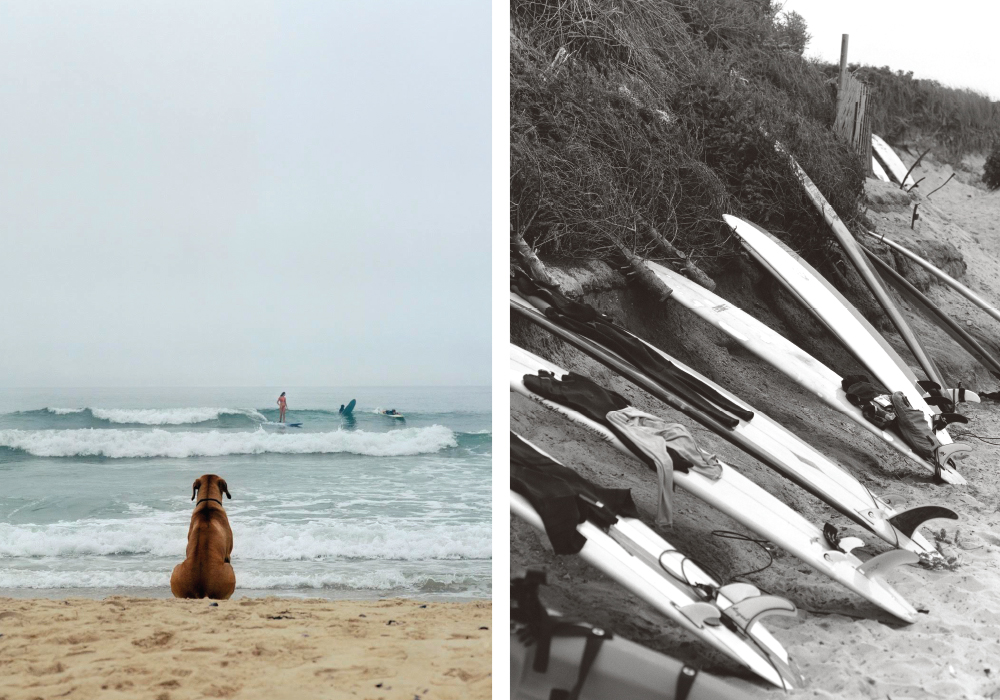 The racers of Dweck’s Blunderbust resemble the surfers of The End in that they’re both groups living outside a system. They pay their dues at joe-jobs, their bodies broken, their lives at risk and they’re putting everything into those 20-or-so weeks they get to race. On those Saturday nights they are kings. They have found a way to be free and young forever—even if it’s only a few minutes at a time.

And the project brings him back to what he started in Montauk 40 years ago. “In your heart you want to remember the parts of your life where you were unencumbered. You had less responsibilities. And life was really good…I’m really conscious now of how fast things change. Faster than ever before…I’m very conscious of an aesthetic. And of what it’s like to be raised around things that are beautiful.  And how that impacts people. That’s why as an artist I try to create images that move people and make you think and ask questions. An artist’s job is to create work that raises questions…about communities and authenticity and what are you doing with your life.”