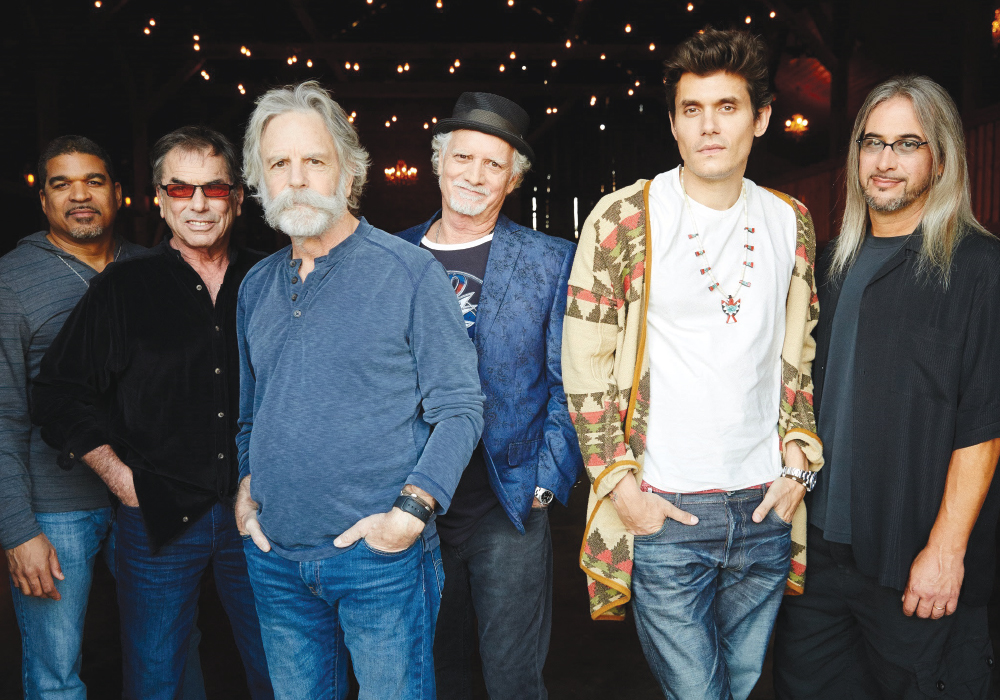 From the Acid Tests of the 60s to the mondo-stadium tours of the 1990s, from Palo Alto to the Pyramids, Jerry Garcia and Bob Weir lit the world on fire with their unique and intricate musical interplay. Within the vast, exploratory sonic matrix of Grateful Deadness, when Garcia would zig, Weir would zag. And on a good night, that universe would take flight, fold in on itself and ultimately explode.

Beneath Garcia and Weir’s musical alchemy was a lifetime of shared experiences. The rhythm and repartee that was vital to their musical relationship was rooted in friendship. That element of camaraderie jumped through the phone on a recent call with Weir and his new mate, John Mayer, as they set out on Dead & Company’s 2016 summer tour, which rolls into Citi Field for two nights this month.

On paper, the Weir/Mayer pairing could not be more disparate. Separated by generations, Mayer’s surface reputation corners him as the tabloid-fodder, ear-candy pop star. Weir is revered as the archetypal anti-authoritarian, sanctified goof, a direct descendent of the Holy Trinity of Beatniks: Kerouac, Kesey and Cassady.

But in true Dead spirit, Weir cast all that useless characterization aside as soon as he and Mayer got together. In conversation, as on stage, the two play deftly off each other, darting, weaving and rapping like old friends. It’s this fortuitous, organic chemistry that was instantly recognizable to Weir and is evident in Dead & Company’s fresh sound. “A year ago, I did a TV show with John,” Weir said. “We were going to do two songs and we did a sound check that lasted about an hour-and-a-half. The idea came up to put together a band.”

The potential of Dead & Company was all the lure Mayer needed. “When we got in the room together with Billy [Kreutzmann] and Mickey [Hart], the idea just took hold of me. And it was as big and strong as any idea I’ve ever had in my life,” Mayer said. “I knew that in the nucleus of it, there was a lot of authenticity…to putting a band together and making music for people to listen to live, and hopefully want to listen back to for a while.”

What Weir heard in Mayer’s playing comes from the same wellspring he heard in Garcia when the two first jammed in the back of Dana Morgan’s Music Shop in Palo Alto on New Year’s Eve 1963: a deep appreciation for an eclectic mix of blues, country, jazz and rock ‘n’ roll. “When John plays blues, you can hear what subgenre he’s going for,” Weir said. “He’s basically a student and fan of American musical heritage. And that’s where our music comes from. [The Grateful Dead] were all different guys, but we all had that same approach, most particularly Jerry and I. And John gets it. He appreciates it, and he’s going for it. He puts out a lot of energy. And when he turns that around and puts it out on stage, he’s a force to be reckoned with. It’s a lot of fun to have a fire-breathing sidekick again.”

When talking about collaborating with Weir and landing behind the wheel of “the bus to Never-ever land,” Mayer pinned the gas, hard. “When you’re into music the way that Bob and I are, it’s almost like collecting baseball cards,” Mayer said. “You collect the Texas Blues card, the Chicago Electric Blues card, the Country Western card. It’s sort of like this love of all these different little cards you collect and keep in your back pocket. So there’s nothing miraculous about being a guitar player, being a musician who understands these different trading cards. It’s just a matter of shuffling the vocabulary a little bit. I think Bob and I are on stage every night—certainly with the other guys, too—sort of at the altar of this thing. We’re both the same age when we’re playing.”

“We’re basically a couple of 14-year-olds looking at this immense palette of colors to paint with,” added Weir, “and in awe of the possibilities. And enrapt in the act of doing it.”

“That’s the closest I’ve ever come to defining it,” Mayer shot back in rhythm. “In front of you are all these paints, you have a blank canvas, and you have three-and-a-half hours to paint whatever you want. It’s just this wild, reckless abandon.”

From the onset, the Grateful Dead has always been about improvisation and evolution. So where does the music go from here? Last summer’s “Fare Thee Well” extravaganza was supposed to be the end, but Dead & Company was actually brewing before those festivities even began. Mayer obviously has a fulfilling and demanding solo career, but it’s clear he cherishes his role in the Dead universe.

“I’m at this point where the shape of my career is sort of in line with the shape of who I am as a person, which is a little broader than just having a solo career,” he said. “I feel like I have the best job in music right now. It’s a little bit boundless. The music of The Grateful Dead and Bob’s support and the band’s support made this such a no-brainer. I will never close the door on Dead & Company, ever. I will do Dead & Company as long as fans want it and as long it still feels like there’s something left on the table to try and play and get right and explore.”

After half a century doing the only job he’s ever known, it’s natural to imagine that Weir’s coming full circle, bringing the entire Grateful Dead experience back to the molten core of its seemingly inexhaustible flame.

“Wrapping it up and buttoning down is not something that I had ever intended, it’s sort of foreign to my way of thinking,” Weir said as he ramped up to share his vision of the future, one he recently had mid-concert. “It was toward the end of our last tour. We were moving into the middle of the second set, into a new tune. Everyone was just sort of taking their time, feeling out the drift of that particular song on that particular night. And suddenly I was viewing this from about 20 feet behind my head. And I looked over at John from that point of view and it was 20 years later. And John was almost fully gray. I looked over at Oteil [Burbridge, bassist] and his hair was white. I looked over to my left and Jeff [Chimenti, keyboardist] was all gray. Looked back at the drummers, and it was a couple of new guys, younger guys holding forth, doing a great job. I looked back at the back of my head, and it was some kid in his 20s, delivering with fire and aplomb. And it changed my whole view of what it is that we’re up to.

“From that point on, when I make a decision regarding the music, regarding how we’re going to proceed in this direction or that direction, I’m wondering, ‘What are they going to be saying about that in 200-300 years at Berkeley School of Music?’ That’s the kind of stuff that goes through my head now, because this legacy here, there’s a chance now that they’ll be talking about this in years to come.”