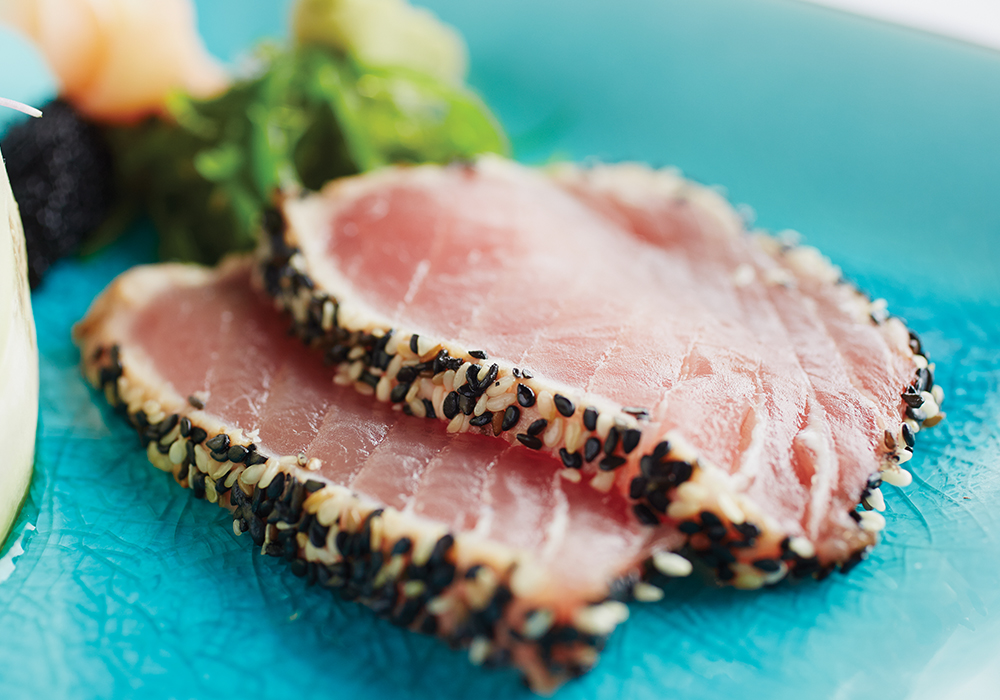 Dockside dining is a spectator sport. At waterfront restaurants, a big part of the scene is the scene. Landlubbers residing at deck-top tables watch the seafaring cavalcade as part of the experience: yachters relishing in their trophies while the captain backs into a slip and the more modest boaters negotiate flinging lines ashore. But for all, it’s about the picturesque scenery, sipping summertime drinks and savoring Long Island’s bounty. This summer, whether circumnavigating the Island or charting a course to one destination, our selections for dockside dining should not be missed. Even if you go by car. 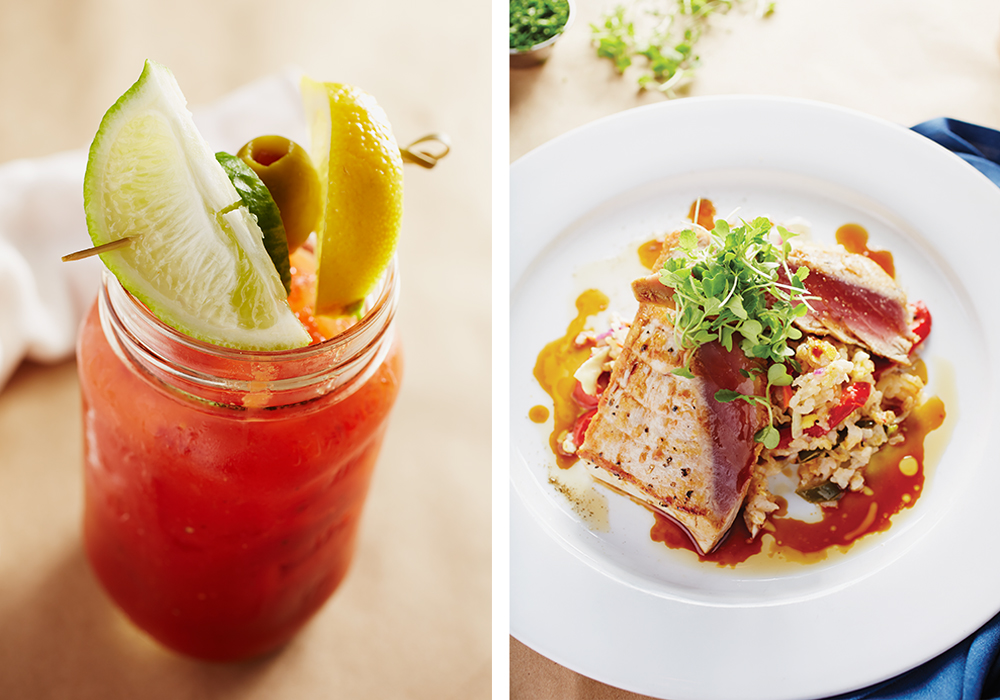 When the red vintage inn comes into view it feels as if time stands still. The former gristmill dates from 1821 and the interior showcases yacht-like polished wood. During prohibition the mill was a popular drop-off spot for rumrunners who transferred hooch during low tide. Sipping a gin and tonic under brightly colored umbrellas on the deck while looking up the creek, the rural North Fork vista still resembles what it might have been decades, even centuries ago.

This was part of the appeal that attracted owner Bia Lowe to the Mattituck Inlet locale. She’s retained that timeless beauty and created a spot that highlights Long Island ingredients, particularly seafood. There are always specials in the bar or on the beach and live music scheduled throughout the summer. There’s no charge when boats dock at the restaurant. If there’s no more space, the adjacent Mattituck Inlet Marina & Shipyard (MIMS) offers a special rate to Old Mill Inn guests: the docking charge is $1 per foot for four hours; $3 per foot overnight.

Alison and Keith Bavaro, who spent their childhood summers on Shelter Island, returned to create new memories at their happening, four-venue complex on the southwest side of Shelter Island. Reservations are recommended for SALT, the main restaurant, where chef Darren Boyle’s focus is on fresh and local ingredients. The market-driven menu features his “Best in Show” clam chowder, plus multicultural temptations from tabouleh and falafel to tempura lobster roll and tuna tatiki salad.

The Ship Wreck, 50 yards away overlooking West Neck Harbor, is a full service bar within a 39-foot refitted schooner where local wines, SALT Waterfront Wheat (their house-brewed beer) and raw bar specials, sushi and chicken are served while live music plays. For those on the go, the new retail outlet at The Tasting Room also sells local wine and serves grab-and-go goodies. The venues are all within the Island Boat Yard on Menantic Creek, which offers resort-like facilities: a swimming pool, showers and chauffeured van service. (All of which come in handy for those who take advantage of the newly launched private catering facility.) While locals simply anchor out and walk on in, there’s a gas dock, transient docking for 20 (from 20-55 feet, as available) and a fee: $4.50 per foot (weekends), $3.50 (mid-week). 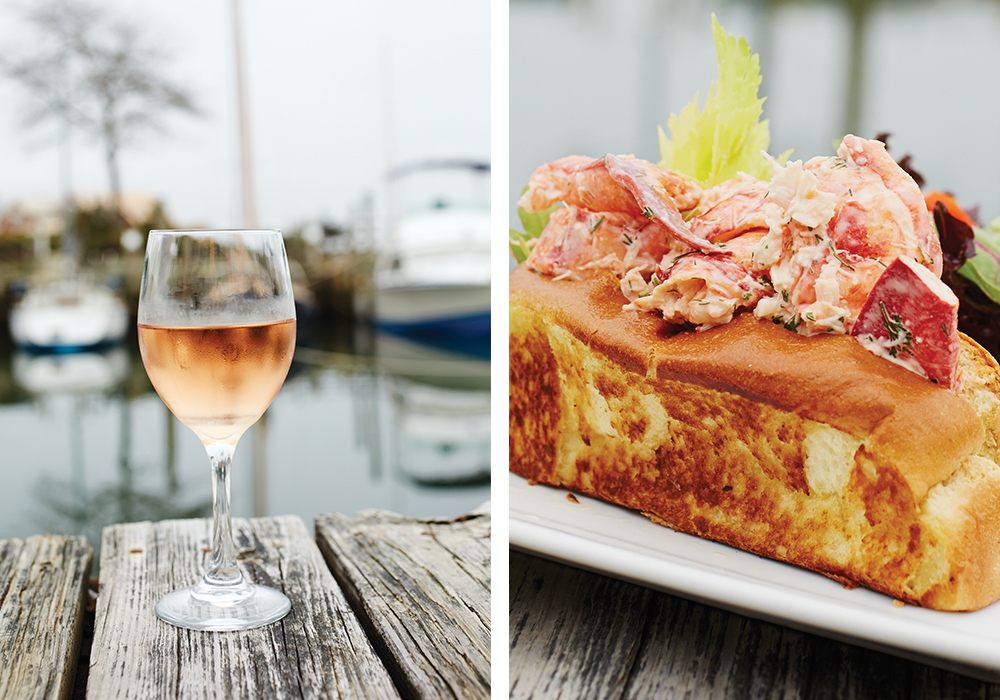 Sitting under an umbrella on the deck at the Island Mermaid and watching the sun set over Fire Island Ferries docking, paddle-boarders skimming across the bay and bathing-suit clad kids selling hand-painted shells from red wagons is as close to a staycation as a day trip can be. Inside, the cozy bar catches the view and serves souped-up, blended frozen piña coladas, a good selection of Long Island wines and 21 beers, including craft brews, some Long Island-based.

Last summer, Scott Hirsch the operator/owner of Island Mermaid celebrated the restaurant’s 25th season. Though there’s plenty of seating for a rainy day, it’s the bay-front deck that comes alive in the sunshine. There’s always a great vibe, the best views and the most extensively varied summer menu favorites. Regulars park their bikes or boats and order fresh lobster rolls, the Mermaid’s famous fried calamari, line-caught local fish or a fresh tuna BLT (with avocado). Weeknight specials include half-priced entrées on Monday and wine bottles on Wednesday; there’s beer and barbecue on Tuesdays and Long Island clambakes are a Thursday night tradition. The four transient boat slips can accommodate beams up to 27 feet, the widest on the island. Docking costs $20 per hour. Reservations are highly recommended.

The four-season restaurant CowFish boasts manicured landscaping and curved paths leading to the steep-peaked space with post and beam construction and panoramic views. The bar on the upper level leads to two roof decks, each with water views, and the bar in the waterside garden overlooks the floating dock. Brunch includes a bellini, bloody mary or mimosa and there are some popular mealtime favorites: Oysters Hampton, Hampton Bays #1 Clam Chowder, blackened fish sandwiches, burgers and steaks. CowFish supports Long Island agriculture and procures fresh local seafood and line-caught fish.

There’s ample complimentary transient docking at the floating dock and within the marina. Plus, the Rumbarge shuttles from CowFish to their Caribbean-themed Rumba location across the bay; it will transport boaters at anchor in the bay to either venue. The eatery is well located immediately south of Montauk Highway at the Shinnecock Canal and offers easy access by boat through the canal from the Peconic or through Shinnecock Inlet from the ocean or nearby bay-front boating communities. 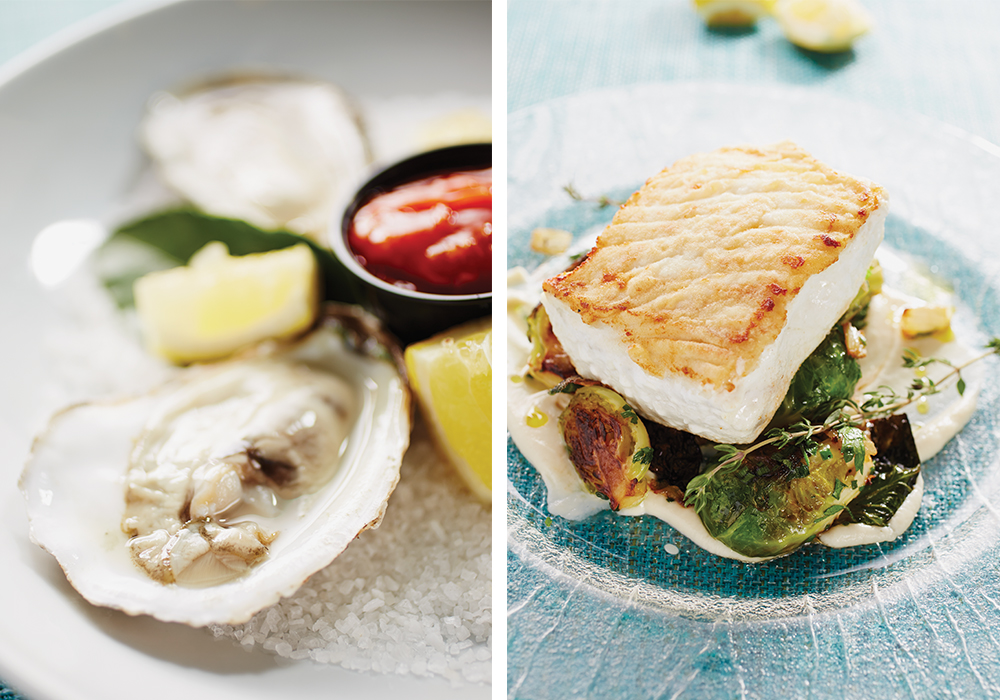 Dockers Waterside is a casually chic destination reached beyond the oceanfront mansions, tennis courts and beach clubs dotting Dune Road. It’s a nautical space where the color palette of marine blue and stark white dominates the décor and the staff uniforms. The popular gathering place offers a windowed veranda, outdoor lounges that feel like waterside living rooms, three bars and live music until midnight, three times a week. Even from stools in the interior bar, there are views of osprey in the marshlands and boats on the bay. Executive chef Scott Hastings is starting his sixth season sourcing fresh seafood from local purveyors. His casual, comfort food menu also features burgers and a chunky lobster mac and cheese. For Dockers’ 27th summer season, there’s a new, 20-slip marina with 9 dedicated transient slips plus a floating dock. Pulse readers enjoy a special rate: $1 per foot.