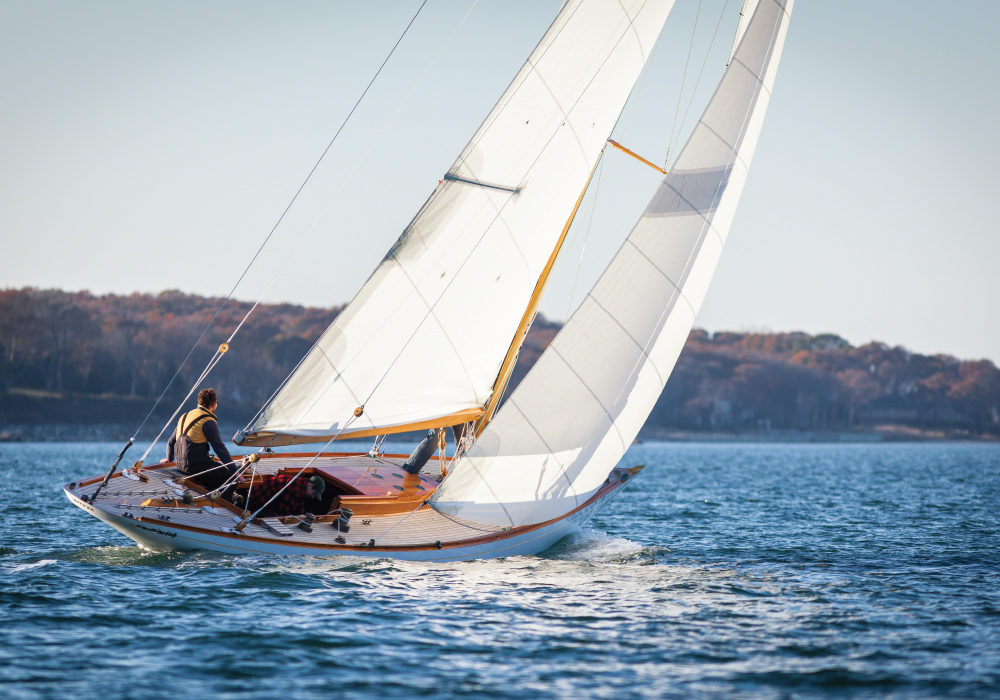 Inside the hull of a freshly glossed wood ship, honesty of craft is laid bare. “To build a boat like this, where it’s all varnished, you can’t hide anything or any mistakes,” said Donn Costanzo, motioning towards the copper studs buried in the ribbing of a 48ft international eight-meter class race yacht his Wooden Boatworks recently launched. Placing the copper fasteners is a time-consuming process and a two-man operation. “Everyone of these are hand riveted. So there’s a guy on the outside holding the copper nail, and the guy on the inside puts what’s called a rove over it, cuts the copper and he peens it over. This is the best way to fasten,” said Costanzo. It’s a traditional maritime skill and like most of the build process of a wood boat, it’s labor intensive. It’s also a necessity, at least by Costanzo’s estimation.

Costanzo is cofounder and co-owner of the boatbuilding outfit operating in Aquebogue and Greenport. He builds classic wood boats from decades-old designs passed on by iconic designers, like Scotsman William Fife, who built yachts in the UK during the late 1800s, and Herreshoff, the legendary American family known for Navy torpedo boats, schooner yachts and America’s Cup racers from the same era. “The Picassos and Beethovens of their time,” said Costanzo. “They really knew how to design a yacht, they sail beautifully, there’s nothing like it.” He started by making boats with his brother in a garage in the Hamptons. They built catboats fashioned after Gil Smith’s, the famous shoal draft designer on Long Island’s South Shore in the early 1900s. “I’ve got a news clipping from a race in 1917. There are 127 boats on the start line and Gil Smith designed 125 of them,” he said. 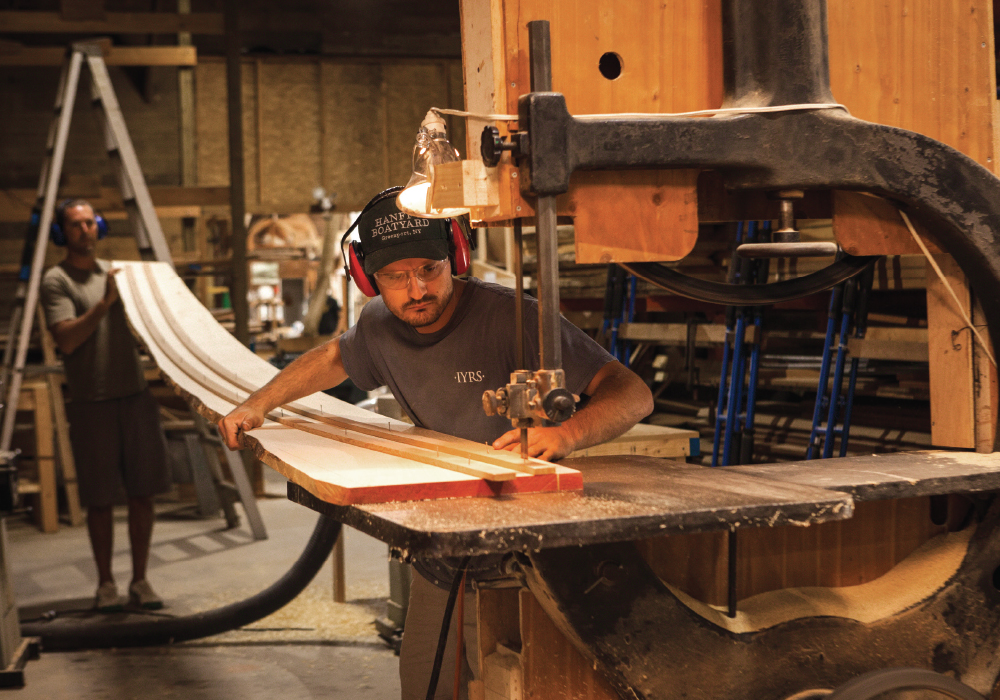 The classic designs are the literal foundation of any of his projects. On the floor of his Aquebogue warehouse, Costanzo and crew lay out full-scale grid work to map out projects on whitewashed, door-skin-plywood boards. On them, he and his workers inscribe each bow and bend of a boat’s framework. These are the guides for shaping the primary framing, made of laminated cherry or oak, which is steamed and bent right on the floor. Temporary wooden ribbands are screwed onto this primary rib-work to shape intermediate framing slats around them. At this stage, positioned upright, the wood frame resembles the skeletal remains of a seafaring leviathan, lying supine supported by braces, its ribs and backbone tawny prongs against the dimmed workspace. By the time the outer planks are fastened, half the effort that was put in becomes a heap of spent supports and ribbands on the floor. “[It’s] a lot of work that doesn’t really ever end up on the boat. Lot of wood too,” Costanzo said.

Wooden Boatworks maintains a veritable lumberyard in its expansive warehouse. At any given time, floor-to-ceiling stacks of seasoned, sustainably harvested lumber rise in tower-like formations in the periphery. Costanzo doesn’t so much own wood as collect it. There’s the two rows of Alaskan Yellow cedar that he milled himself in Vancouver, planks of Live Oak he salvaged from the rebuild of the Morgan (the last wood whale ship in the world) and some Port Orford cedar. “[It’s] some of the best cedar in the world…very hard to find, you can’t get it any more. I waited three years to get it.” It’s because, for Costanzo, the materials are almost as important as the finished product. “It gets expensive, but labor’s so intense, you can’t really sweat the material price.”

It’s a cost he gladly pays to preserve a mode of craftsmanship and respect for the natural bounty that made boating possible. As he put it, “It’s kinda almost a museum mentality. You do exactly like they did it in 1930, or as close as we possibly can, with some improvements…electronics are dominating people’s lives and they need something real—those are real trees that grew, that’s real wood, not fake or laminated…all handcrafted timber [that is] selected for their job and for the beauty.” 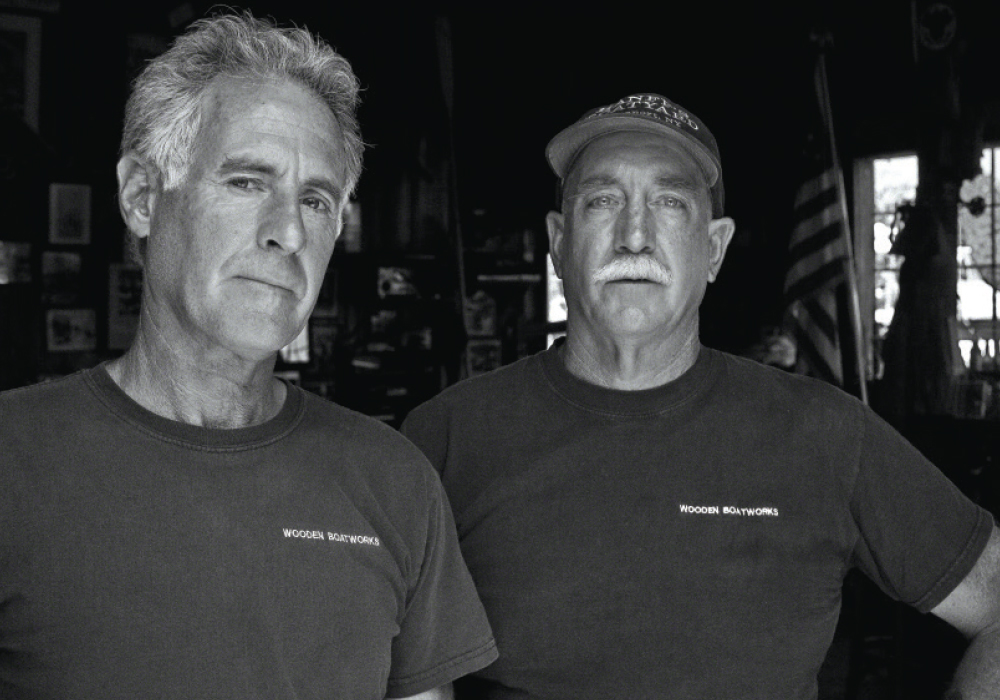 Costanzo is committed to preserving all aspects of our maritime heritage, not just the designs. It’s how he got to be at his location in Greenport. The owner had one condition when he sold to Costanzo: “Don’t turn it into condos, or an ice cream parlor or t-shirt shop, you keep it a boatyard. That was what the place was meant to be, it’s part of the town heritage.” There’s a photograph hanging in Costanzo’s office of the shipyard around the turn of the century, before the town was even incorporated. In his hands, the boatyard hasn’t changed much at all.

Just up the road from Costanzo is another brethren in arms plying a trade in wooden vessels. From outside, the warehouse of Anders Langendal & Sons looks as if it washed up on Greenport’s shore rather than being constructed there. The rusted, faded corrugated-tin walls feel a natural part of the setting along the docks.

The inside houses a jigsaw of boats in various states of repair. “Couple movies have been made here, that one with Brad Pitt and Harrison Ford. I don’t know if I ever saw the movie, but they were here about a month running around.” Anders is indifferent about the “character” of his shop and is likewise less sentimental about the “art” of his craft. “Forget about romance; anything that’s a challenge” is a penchant of his, “something that nobody else would be able to tackle.” For him, the test lies in repairing wood boats, making what was old, new, and taking on the jobs that not many can handle or are willing to put the effort into. Old wood boats are a noble effort and sometimes, just getting back to basics is gratifying. 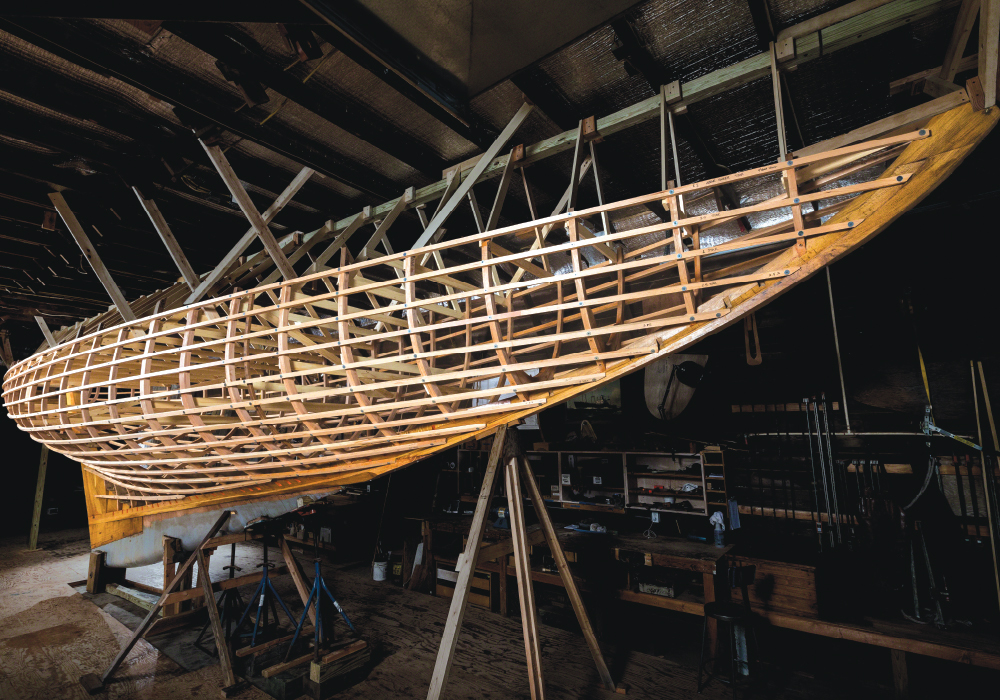 INVADER at the ribband stage. Steam-bent oak frames will be pulled into place between the laminated cherry frames image: peter braune

Like working with red lead. It’s the same paint that’s on the Golden Gate Bridge—it stands up well against rust and when the sun hits it just right, it shines gold. “Last year we had a boat we did—put a whole new bottom, the keel and everything…small boat, 20-something foot, but it was a big job…that was pretty interesting. It was a wood boat and we did a lot of old fashioned stuff like red lead and pine tar, which nobody else uses anymore,” said Anders.

The master boat builder came to Long Island by way of Sweden, where he apprenticed for four years and built racers in the 1950s. He set up shop on Shelter Island in 1965 and has been at his current location for the last 15-20 years, he reckons. Of late, the company’s main business has been fiberglass repairs and custom carbon fiber projects, like building masts and hardware. But Anders, surprisingly, finds this to be the best education a boat craftsman can receive. “You do more repairs and that’s when you actually learn boat building. You see other people’s mistakes.”

Some of the fruits of his decades of labor are displayed across the island, a highlight reel of a lifetime working in wood. One half of a 5.5-meter racing boat—the half Anders built while in Sweden—resides in a bar on Three Mile Harbor. The oldest boat he ever worked on, an 1888 oyster sloop named Priscilla, is currently taking up residence at The Long Island Maritime Museum. Even the Langedal warehouse is a trove of boating history. Last summer the storeroom doors were opened and the public was able to peruse the veritable museum: a venerable Hand V-Bottom motorboat from the early 1900s (slogan: “The first and only V-Bottom…unequalled by any other type”), the seven-meter class Valkyrie built to battle for the cup in the 1920 Olympics and a Swedish-made Kings Cruiser constructed in 1957. 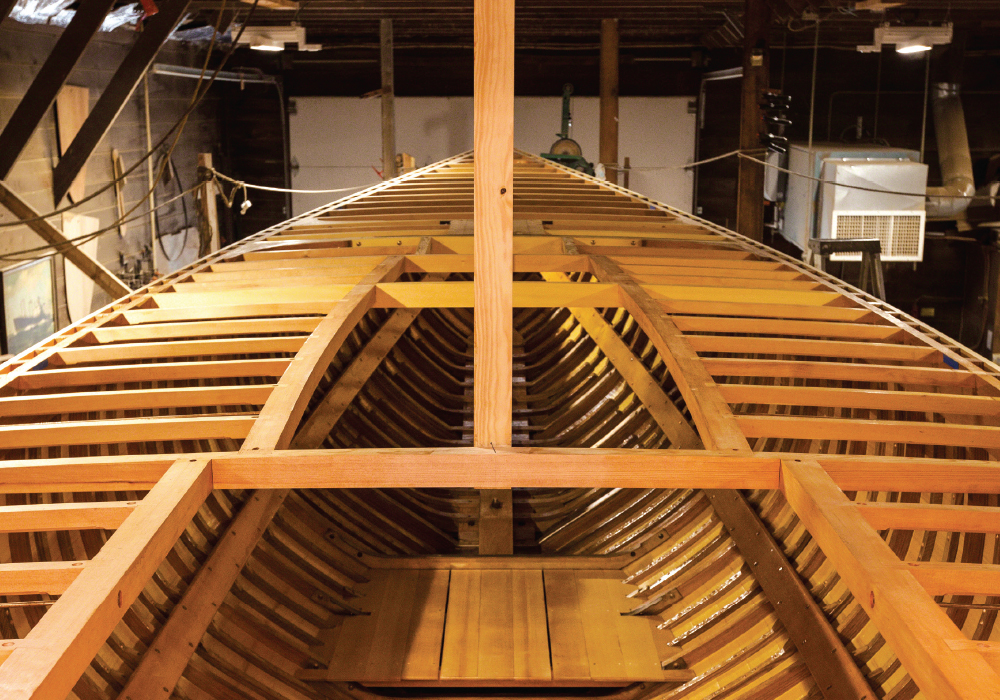 Anders and his sons are serious about timber, especially when it’s planked up on classic ships. When the need arises (or supply is low), the Langedals cut their own wood. They have their own stock at their Shelter Island location, which they hand feed into a giant machine that cuts it into standard 32-foot sections or other custom pieces. To move their boats, they use old logs that they hand roll “like the Egyptians did.”

Still, despite adapting to the evolution of boat building, Anders maintains his reverence for the prestige of wood ships. In a fiberglass world, he believes in the heritage from which they’re wrought. As he stated simply, “You go on the water, you have a wooden boat, you are somebody.”