The air is warmer, dining a la fresco is back and soon it will be time to take up residence in the Hamptons. This year, some Hamptons homeowners learned their busy lives just got a little bit easier. After more than two decades of running several estate care companies, from landscaping to pools, father-and-son duo Juan Carlos de León and Carlos Robert de León put them under a single umbrella, the León Group. In the process, they created the Hamptons’ largest estate care company.

“It was getting too difficult because our clients were getting bills from all different companies,” León Group vice president Carlos Robert de León said. “We created the León Group to provide a unified front and to provide our clients with one point of contact. All they want is to hire a company they can trust and we’re there to make their lives easier with a family-style approach.”

It’s been all in the family since Juan Carlos began a small landscaping company in 1988, shortly after immigrating to Westhampton Beach from Guatemala. He barely spoke any English and didn’t know much about running a business on US soil, but it didn’t take long for him to become a success. He expanded his business to include companies like Long Island Estate Care, Inc, De León Construction, Inc, Verdant Landscaping, Inc, Aqua Bella Pools & Spa and Seaside Irrigation. When Carlos Robert turned 12, his father loved him enough not to spoil him. 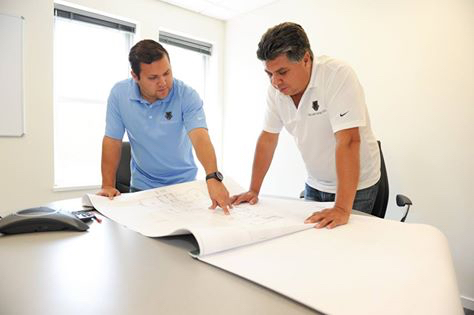 “When I was 12 years old I started working the business with my father, mowing lawns with him, planting trees, learning about agriculture and construction,” de León said. “We’re more well off, but he never wanted me to take things for granted. I bought my first car at the age of 17 thanks to working with my father.”

Though Dad gave him his first job, he wasn’t grooming him to run the business.  De León went to college—the first in his family to do so—and graduated with a degree in political science from SUNY Oneonta, with honors, and he has a degree in finance from Pace University. He went on to get a job as an underwriter, but the 9 to 5 grind at a desk wasn’t for him.

“When you’re working in finance, you’re punching a lot of numbers but I didn’t feel like I was creating value,” de León said. “When I build a pool and design it for a customer, I spend months planning. When I finish that product and you see the kids run out in joy and love everything they’re getting, that’s creating long-term value to me and that feels really good.”

Even though he’s the son of the founder, de León worked his way up to get to where he is today with the company, and that resonates with the staff.

“The only reason I can do what I do now is because ever since I was younger he ran me through every phase of the business,” he said. ”I know [our employees] get tired and how long it’ll take you to do something and I think that’s really helping me run this business.”

And as the company enters a new chapter, it’s still father (and mother) knows best.

“We really want to keep with the values that were instilled by my mother and father,” de León said. “That’s largely how I grew up and how this business has become successful. It’s a personal service. We genuinely care.”