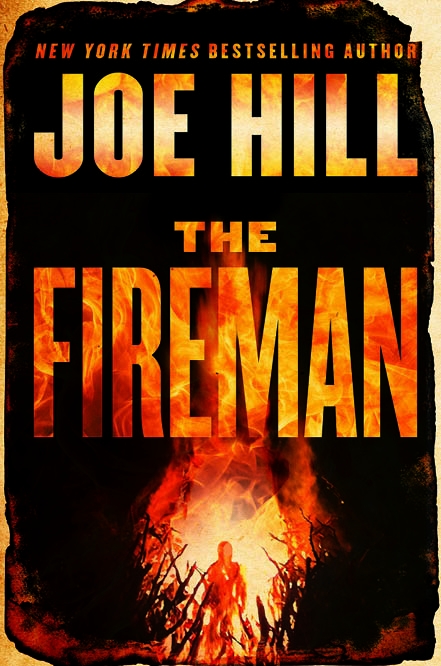 Your family has a good contingency plan.

You all know what to do if there’s a blaze or a flood. You know where to go, what to grab if there’s time and what not to do. You’ve practiced–at least in your mind. But what if your Plan A fails? In The Fireman, the new novel by Joe Hill, that’s the burning question.

Harper Willowes Grayson couldn’t quite believe that she’d gotten infected. As a nurse, she knew the dangers. She knew that those who got Dragonscale died horrible deaths in fire that consumed them from within. Millions of people worldwide had been reduced to ash, and she’d taken strong precautions against Draco incendia trychophyton, but there it was: a filigree trail snaked black-and-gold around her hips and up her arms. A sign of infection, a death sentence.

Her husband Jakob had sentenced her to death already though, hadn’t he? He forced Harper into agreeing to a suicide pact, should either of them fall sick. Would he really make her go along with it now that she was pregnant?

The answer was yes, but on the day Jakob became crazed with fear and tried to kill her, Harper learned that her months as a nurse offered her something unique: the friendship of a tall, mysterious man, ‘scaled up and wearing fireman’s gear.

She had once helped the fireman’s ailing nephew and in return, the fireman vowed to save her life. He whisked her away to an abandoned summer camp, leaving her in the care of other survivors who’d learned to harness their Dragonscale; they’d also taken measures to avoid Cremation Crews that sprang up to annihilate ‘scale sufferers. Camp residents would keep Harper and her unborn baby safe.

But was she safe there or did the camp offer its own set of dangers? As Harper learned more about her savior and about the people of the camp she began to have her doubts, but she couldn’t leave. If Jakob learned that she was still alive, he’d try to extinguish her for good.

Overall, I was quite satisfied with The Fireman, though it did have its “huh?” moments.

Because, perhaps, of its size, it seemed that author Joe Hill let his story run away with itself sometimes. Conversations became overly long and clichéd, there were minor head-scratchers here and there, I noticed that one character went uncharacteristically missing for awhile, and some plots were too pat.

And yet, I almost ripped a few pages in an effort to turn them faster because Hill doesn’t let up on the heart-thumpers much. Every time you think you can breathe (or laugh, because Hill also has a fiery sense of humor), you’re yanked back into a story that’s hair-raising, sleep-squashing and just about believable enough to make you check your own skin for ‘scale.

That means that fans of post-Apocalyptic novels, zombie TV shows and good old-fashioned scream-fest novels should scream for this one. Who knew that a book called The Fireman could chill you so thoroughly?