Sharks are fearsome. So fearsome that it makes swimmers think twice before dipping a toe in the water. But you should fear a world without sharks more than you fear the giant of the deep.

We need sharks to survive. These ocean beasts have been around since pre-historic times and still play a vital role.

As the top of the ocean’s food chain, sharks keep the marine eco-system in balance. A 2007 study in the journal Science found a link between the disappearing mid-Atlantic shellfish industry and a falling shark population. The sharks eat cow-nose rays that eat scallops. Without sharks, the population of rays increased about 8 percent per year from 1970-2005 and reached about 40 million. They went on a feeding frenzy so great a centuries-old North Carolina bay scallop fishery closed.

Overfishing of sharks is also a threat to coral reefs according to a 2013 study published in peer-reviewed online journal PLOS ONE. A decrease in sharks near an Australian reef meant more grouper fish. Groupers eat parrotfish and without the parrotfish, which eat algae, algae smothered the reefs.

The impact is felt by land-dwellers, too. We get a third of our food from the sea. And oceans provide more oxygen than all the rainforests combined. They control the earth’s temperature and even the weather. Sharks don’t just help the environment–they are an economic driver. Every year tourists pay to see sharks at aquariums, on shark charters and dives. One study has put the value of a live shark at nearly $30,000 per year.

So, what’s happening to the sharks? Well, first they get a bad rap. Between 2005 and 2014 an average of six people per year died from a shark. In contrast, as many as 100 million of the creatures are killed by humans each year. Around the world sharks are hunted for their fins, a practice called finning. A shark’s fin is cut off at sea for medicinal use and the rest of the animal is tossed back into the water to die. Some right off our local waters, even though finning is banned in the US. Shark fishing is still permitted and remains a popular activity on the East End. 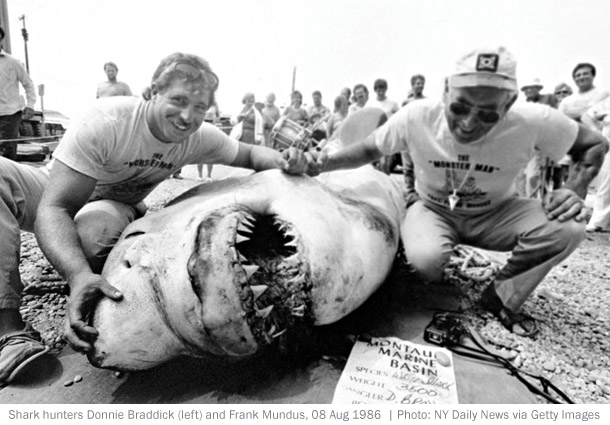 Local legend Frank Mundus, the supposed inspiration for Quint in Jaws, was a shark fishing pioneer who hauled a great white shark on to a Montauk dock in the 1960s. In the later part of his life Mundus worked towards shark preservation and some of that has taken hold on Long Island. Since 2013, local fishermen and environmentalists have held the Shark’s Eye Tournament and Festival a satellite, tag, catch-and-release fishing competition that supports shark research and promotes environmental awareness.

You can help the world protect sharks by paying attention to the type of seafood you’re eating, knowing what’s in your cosmetics and spreading the word about the importance of sharks.