Forget the diamonds on Long Island native Emily Sciarretta’s bedazzled wheelchair. They sparkle and shine, but she met her true best friends through Canine Companions for Independence, a non-profit that provides assistance dogs to people with disabilities.

The first is Carmel, her service dog. Carmel is a black lab with expressive brown eyes. She is so in tune with Emily she’ll hop into bed and cuddle with her when she’s in pain. The second is her husband, Frank. Frank was born with spina bifida and has received two service dogs through CCI. He is the kindest man Sciarretta knows, shares her dark sense of humor and is the family’s handyman.

“If something goes wrong with my chair within reason, he can fix it,” laughed Sciarretta, who will represent New York at the Ms. Wheelchair USA competition this month.

Carmel and Frank represent the light at the end of a long tunnel for Sciarretta. At 28, she noticed her feet felt numb. She thought she just needed to shake it off, but when she was driving home from work Sciarretta realized she couldn’t feel them.

“I went to the chiropractor and he asked if he could see my MRI. He took it to a friend of his who was a specialist and he said, ‘You have to see a neurologist. There’s something wrong with your spine.’”

And so began what Sciarretta likes to call “a ride.” Over the next several years, she was diagnosed with Chiari malformation, or structural defects in the cerebellum (the part of the brain that controls balance), and type-3 ehlers-danlos syndrome, a disorder which pulled her spine into a tethered chord. She became unable to walk, needed two brain surgeries and lost control of her right arm. Eventually, Sciarretta, who was healthy her whole life, who loved to sing and dance and be around people, was now scared to go out in public and the youngest person in her nursing home.

And that’s when, incredibly, things started looking up. One day a nurse suggested Sciarretta go over and speak to a women who was visiting her mother with a therapy dog.

“I was having a really rough time. She said, ‘You’re so young! What are you doing here? Would you like to pet my dog?’”

Sciarretta developed a bond with the woman and her therapy dog, going over to the pair whenever she saw them. On one visit, the woman encouraged her to look into CCI, so Sciarretta had the nurse roll her over to the computer. One scroll through the organization’s website was all it took.

“I realized I have to get out of here. I promised the doctor, ‘If I get worse, I’ll be back.’”

Five years ago, Sciarretta completed the process to receive a service dog, which includes a two-week team training period with the dog and a practical and written exam. She and Carmel have been side-by-side ever since. Carmel knows about 60 commands, such as “get,” which means to grab something off the floor so Sciarretta doesn’t have to strain her back or try to use the right arm she still cannot control. But the greatest gift Carmel has given can’t be taught.

“It’s not about me and my rare condition and the doctors being stunned anymore. Now, it’s about taking care of her. My job as a pack leader is to protect her and be there for her and her job is to help me and be there for me.” 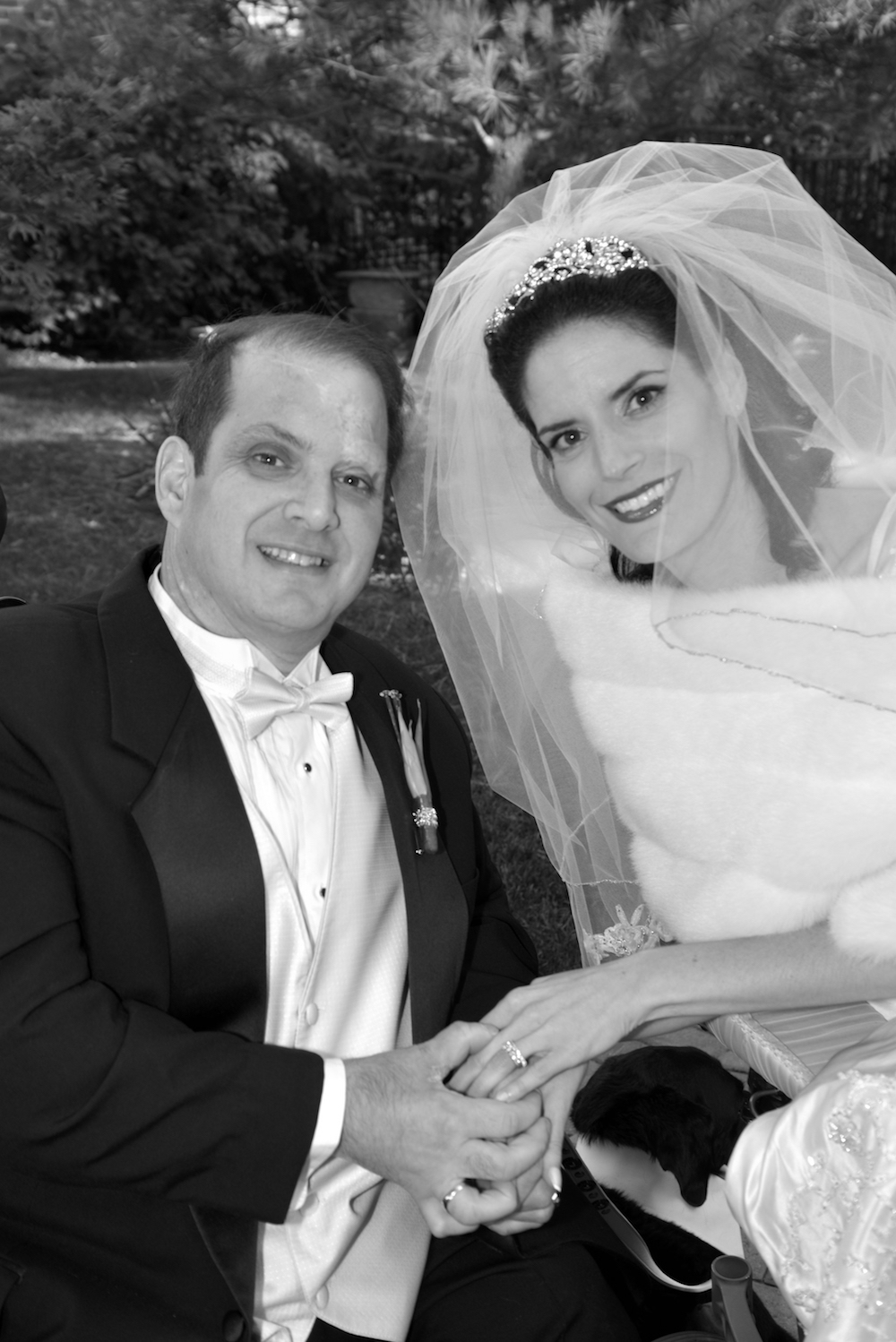 If that was the story’s ending, it would be a happy one. It isn’t. A year after she met Carmel, a volunteer introduced her to Frank. She again felt her life changing, but this time it made her nervous.

“I have so many conditions, but he was so incredible. If I was having a seizure he would hold my hand and say, ‘I’m here. You’re OK, I’m here.’”

After a month, she realized three things: they’d have to live a bit differently, it didn’t matter and that he was the one. They got engaged nine months later and have been married about three years.

At Frank’s urging, Sciarretta decided to compete for Ms. Wheelchair NY USA 2016. She came up with the concept of Service Dogs Changing Lives One Wag at a Time to educate the public. During the competition, she spoke about the importance of not distracting or petting a service dog without permission or trying to pass a non-service dog off as one. Carmel co-starred, and Sciarretta walked off with the crown.

“My platform is a show-and-tell. I can show you what Carmel can do for me, which makes it unique.”

Sciarretta and Carmel will take their show to the national stage this month when Sciarretta looks to become the first Ms. Wheelchair USA winner to use the platform of service dogs.

Sciarretta is busy preparing for the competition, but she’s found time to sing again at local church carnivals and coffeehouses. It’s another exciting improvement for a woman who didn’t even want to leave her room a decade ago.

“There was a time I couldn’t sing a note.”