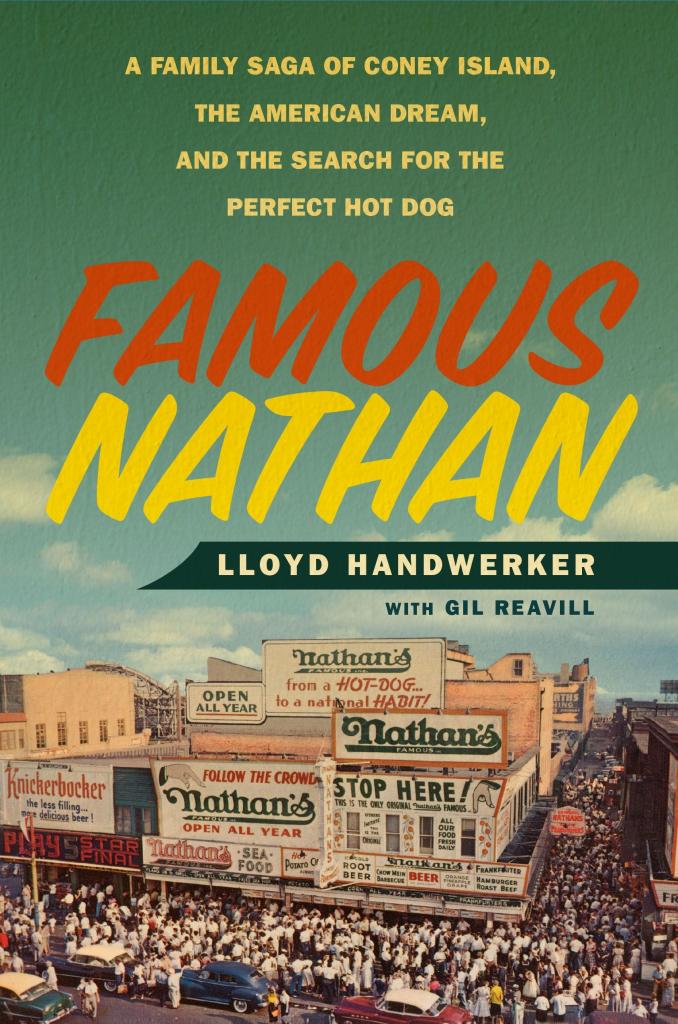 I can beat you at that. You got more than me, more from Santa and a bigger birthday cake. I was Dad’s favorite, I’m better than you and sibling rivalry can linger long past childhood. It’s not pretty and, as you’ll see in Famous Nathan by Lloyd Handwerker (with Gil Reavill), it can bring down an empire.

Born in 1892 in Austria-occupied Poland, Nathan Handwerker was a go-getter, even as a boy: his family was poor and had many small mouths to feed so he, as the third-oldest son, begged his father to let him leave home to work. Eleven-year-old Handwerker found a series of jobs that paid little but he settled on one in a bakery, reasoning that he would never go hungry there.

Living in Poland at the turn of the last century could be dangerous for a young Jewish man–gangs and military recruiters were on the hunt–so Handwerker began saving to move to America. He left the Netherlands in March of 1912 and upon his arrival in New York a month later, he quickly found a job, then another and another. Remembering his life back home, he found employment in restaurants and worked his way up, toiling seven days a week while he learned English.

While at his part-time job in Coney Island, Handwerker noticed a counter location that would make a perfect place to start a business.

It took a while for Nathan’s (later, Nathan’s Famous) to be successful; Handwerker was initially charging too much for his hot dogs but once he settled on a nickel apiece, two cents for a drink, “the store” started to take off. Coney Island was the place to be for New Yorkers escaping the city.

Nathan’s was open year ‘round and became famous for speed and spectacle of service. Handwerker was at the store every day, sometimes for 20 hours a day, but he still managed to marry and have three children–the younger two both sons he hoped would someday take over the family business.

As they say, though, all good things must end. Coney Island changed quite a bit in 1966 and Nathan’s began to struggle, partly because of the “small-is-beautiful versus big-is-better” debate and good old-fashioned sibling rivalry.

As business biographies go, I thought Famous Nathan was one of the tastier.

Author Lloyd Handwerker, grandson of Nathan, starts his sweeping story with a Coney Island tradition, then moves in directions that truly couldn’t be more opposite. We travel from a competitive eating stage to the sleeping-pallet of an illiterate, dirt-poor immigrant who stumbled into his life’s work to avoid starvation, the irony of which is never allowed to be lost on readers. Handwerker’s storytelling (with Gil Reavill) is clear, lively and filled with such twists. I thoroughly enjoyed it.

From the first page, this is an easy book to like: it’s interesting, has a smooth timeline and sometimes reads like a novel. If you’re hungry for that, Famous Nathan is a wiener.