Considered to be one of the last active modernist architects, Richard Meier is more concerned with space, light and form than industry trends. Known for white, geometric structures like the iconic Getty Center in Los Angeles, the Barcelona Museum of Contemporary Art and the Jubilee Church in Rome, Meier also designed Long Island’s Alfonse M. D’Amato Courthouse in Central Islip and New York City’s Charles and Perry Street towers. The youngest architect to win the prestigious Pritzker Prize for Architecture in 1984, Meier is as prolific as ever, recently completing the 2018 Winter Olympics-ready SEAMARQ Hotel in South Korea.

It has been a productive career, which began with Meier being drawn to architecture books at a very young age. “I found books on people like Frank Lloyd Wright [who designed Fallingwater] to be very inspiring,” recalled Meier, now 81. “And I used to build models in the basement of my parents’ house.” But it wasn’t until he was studying architecture at Cornell University that he discovered the early work of modernist Le Corbusier, whose Villa Savoye was a big influence on Meier’s style. “The proportioning systems I use stem from the Greeks and Romans, but I was more inspired overall by modernists like Le Corbusier, Luis Barragán and Louis Kahn.”

The Getty Center, Meier’s magnum opus that was 14 years in the making, is like a modern-day Acropolis overlooking L.A. The museum’s galleries are filled with natural light and surrounded by courtyards, gardens and fountains along the 110-acre site, which also includes a research institute with a million-volume library. “The Getty is definitely unique,” said Meier. “People enjoy spending an entire day walking around looking at things.” And if they stay long enough they’ll have an exceptional view of the sun setting over the Pacific, which was all part of Meier’s plan. 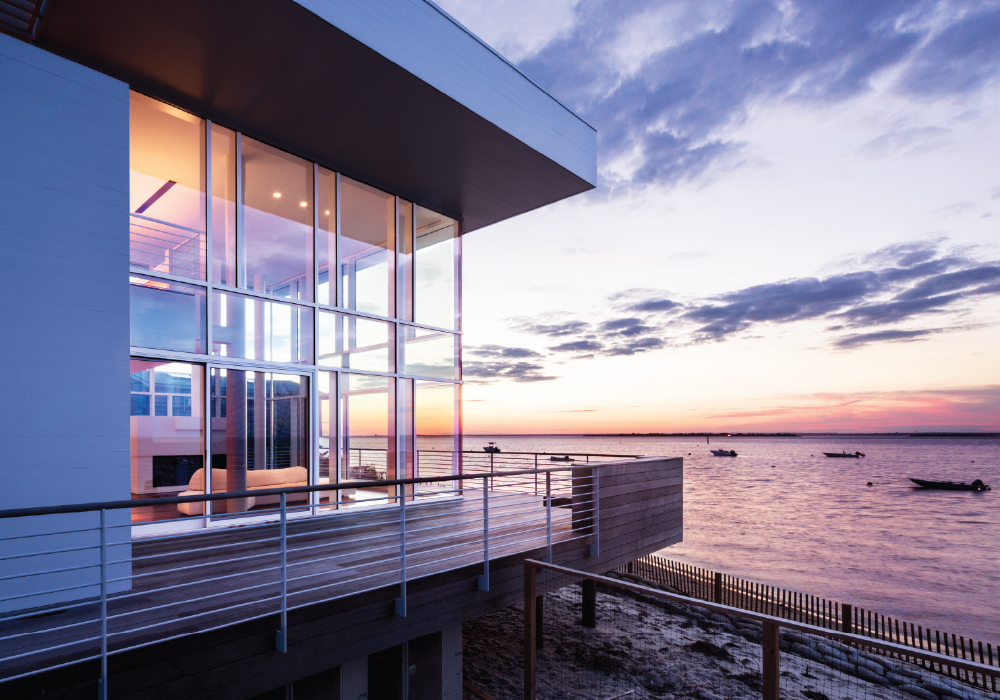 The importance of topography in his work is also apparent when viewing both the Fire Island House and the SEAMARQ Hotel. Located along the beach in Fair Harbor, Meier designed the 2013 award-winning Fire Island House for a friend. The 2,000-sq. ft. flat-roofed residence features glass, wood and white finishes that reflect the colors of the water. “The site, and the relationship to what’s around it, was a priority,” said Meier, whose East Hampton residence is a beige 1907 farmhouse. “I used solar glazing on the windows and the skylights because it’s all glass and the light is very strong so I wanted to diffuse it but I didn’t want to put shades all over.”

Facing the East Sea, the SEAMARQ Hotel is located near the city of PyeongChang, which will host the 2018 Winter Olympics. The stunning structure composed of glass, stone and pre-cast concrete includes serene views of nearby Gyeongpo Lake and the distant Taebaek mountains. A highlight of the resort is a fifth floor outdoor infinity pool and teak sun deck that offers panoramic views of the sea. “The forms expressed in a light and white color palette will make the building transform throughout the day in the interplay of light, shadow and reflections of the seasonal colors of its surroundings,” said Meier.

In 2013, the visionary architect celebrated the 50th anniversary of his New York City-based Richard Meier & Partners. More than 400 3-D representations of his work can be found at the Richard Meier Model Museum at Mana Contemporary in Jersey City (about 20 miles from Maplewood, where he grew up). And his firm is about to break ground on its tallest residential building in New York City—which happens to be black—in addition to a Beverly Hills luxury hotel. 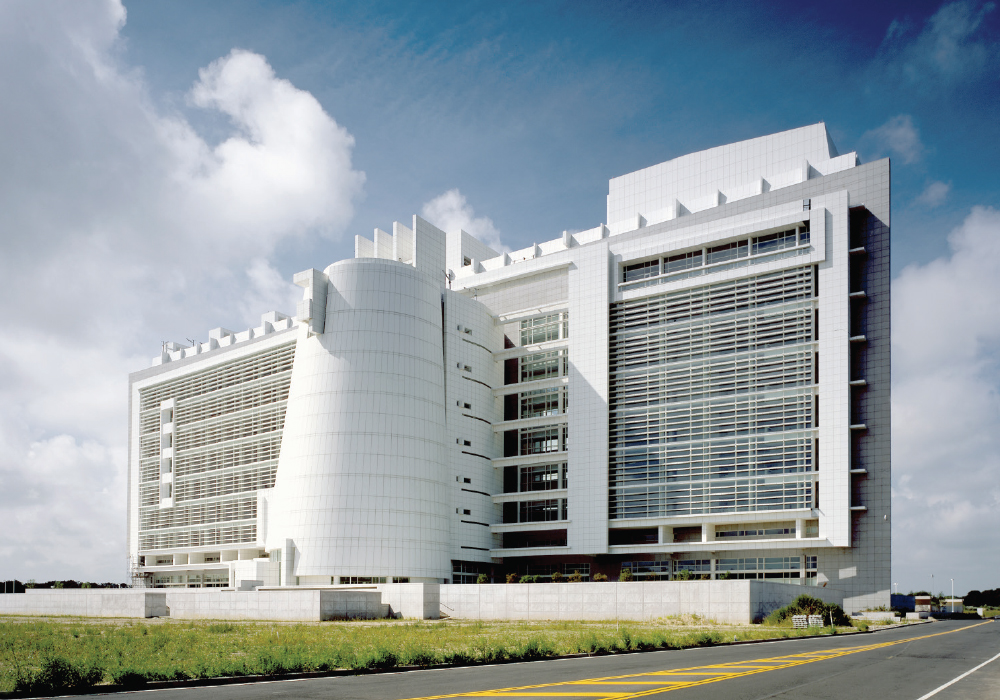 Why is white still so important in your work?
The whiteness reflects the color of nature. It reflects the colors that are all around us—whether they be from the sea, the sky, the trees or the clothes that people wear.

Were you leery of taking on your latest New York City project, an all-black glass building with tinted windows?
I saw it as a challenge. It’s dark from the outside but from the inside it’s still very transparent and open. That’s the nature of the glass. It’s not white but it can still pick up the changing daylight. I think it’s going to be a beautiful building that will complement the United Nations building and make it an interesting neighborhood from an architectural point of view.

How do you harvest natural light and why is that so important to your designs?
Natural light is central to all our work and is as much a building material as concrete and stone. It can shape space and mark the passage of time. When light comes through it makes you feel good. You don’t have to be sitting outside to enjoy it. There are many ways of harvesting the light. You can bring it in horizontally or vertically. Skylights will bring light in as well as glass walls.

Which of your works best represents your architectural philosophy?
The condominiums I designed on Charles Street and Perry Street in the West Village in the early 2000s and the new residential tower on First Avenue just down from the United Nations. Both reveal a limited palette of materials with an emphasis on lightness, transparency and precision. The glass allows for transparency and light while the precision relates directly to the grid and structure defined by the concrete and steel. 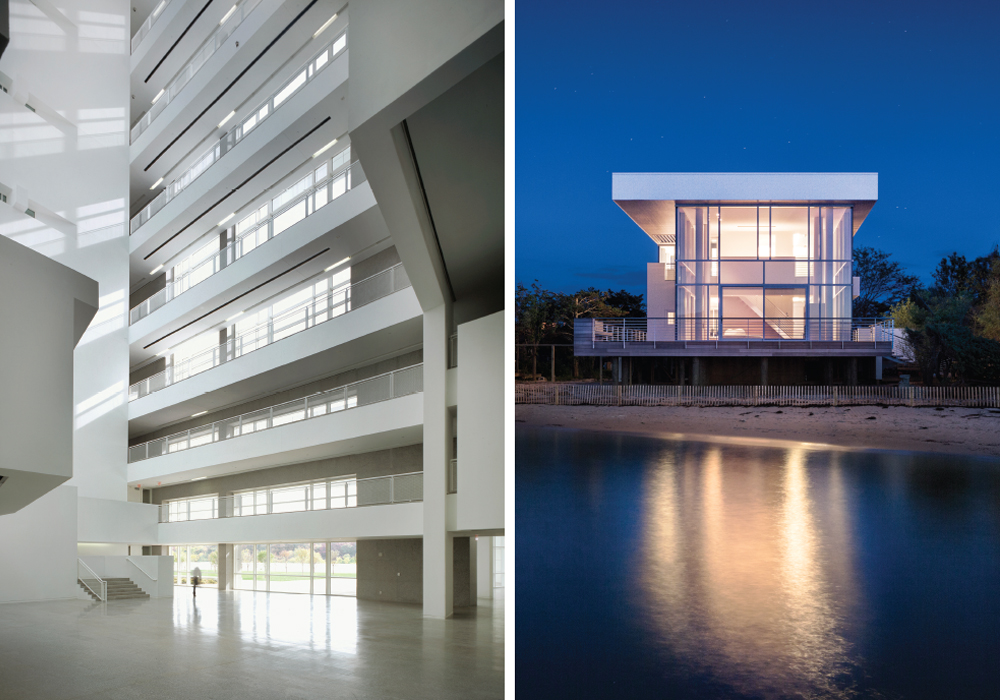 Interior atrium of the Alfonse M. D’Amato United States Courthouse/ View of the Fire Island House at night from the Great South Bay.

What inspired the aesthetics of the SEAMARQ Hotel in South Korea?
Many of the cues for the design came from the site—its light, its landscape, its topography. But the guest rooms and the public spaces at the SEAMARQ are in many ways related to some of the early houses that I have designed. The 1967 Smith House and the 1973 Douglas House also have an open living space, a great deal of transparency and an openness to the nature around the site. The geometric form of the SEAMARQ Hotel follows the shape of the hill with an 11-story tower perched on top of a base comprising 150 guestrooms. The views to the ocean, the Gyeongpo Lake and the distant Taebaek mountains are unobstructed and maximized with indoor and outdoor spaces that flow seamlessly together.

You used solar glazing on the Fire Island House. What other sustainable methods are important to you?
A greater sense of ecology and sustainability is very important in every work. It’s like structure, the building has to stand up and it has to be sustainable. We make intelligent use of the world’s limited natural resources, including those freely available as light and natural breezes for ventilation and cooling. And we currently have several LEED developments under construction and recently completed the Italcementi i.lab in Bergamo, Italy. The lab has skylights and daylight sensors that control discreet shading devices to mitigate glare and heat gain. And a pollution-reducing concrete mixture was developed by Italcementi for the building. In addition to the photo catalytic “smog-eating” concrete, the structure has photovoltaic panels, solar panels and geothermal energy to meet all of the building’s heating and cooling requirements. This project aspires to be a benchmark of sustainable design in Europe and it has attained the first LEED Platinum accreditation in Italy.

Why do you believe architecture is “the mother of the arts?”
Throughout history architecture has been important. I believe it connects the present with the past. When people travel what do they do? They go to museums and look at buildings. One can get an understanding of the culture of a place by studying its architecture.