“CERTAIN PIECES ARE KNOWN TO BE THIS SHAPE —well, not anymore. I’m going to bend and twist that…To put something in that’s a known and common shape is almost cliché—anybody can do that. But it always is more interesting when the common shape has been distorted.”

Making art came late for John Bell but he’s been forming his technique all along. The welding had been with him since he was a kid stealing parts from defunct airplanes to make go-carts. As a teen he fed his predisposition for painting by regularly visiting museums. Later, he’d avidly read about sculptors and pursue classes at SVA.
That might be why Bell is a purist who sees forms and lines and constructs from there, sidestepping the interpretive and focusing solely on an aesthetic pursuit. It’s a junction of art, welding and problem-solving that has always been a part of his life. “I go to sleep every night thinking and dreaming about the artistic problem that’s in my garage. And there’s nothing better than an artistic problem to solve.” 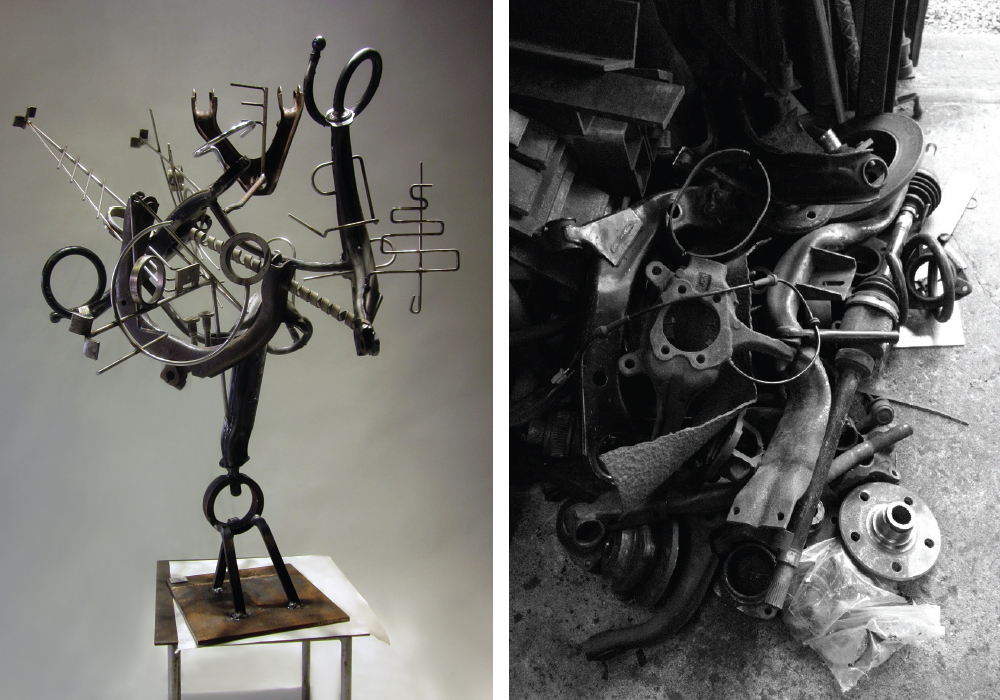 The artist works intuitively, drawing inspiration from Kandinsky, evident in pieces like “Bowman” and “Slant Circle.” The works are abstract and purely lyrical, but easily look like what they are. His naming conventions support his simplistic approach— always eschewing the esoteric for the direct. “I just see it for what it is…I don’t look at it as an existential thing at all. Circles, ovals, triangles, rhombuses…I love mixing irregular pieces and shapes in with them to break up their linearity.” And it shows in works like “Mixed Direction.” There is symmetry and asymmetry; a congregation of rhythmic outlines that is like watching a school of fish swim through light shafts.

Last year, Bell’s trip to Detroit set him on fire. The imposing features of Diego Rivera’s murals at the Detroit Institute of Arts (which Bell called a “Sistine Chapel”) and endless findings of orphaned car parts fused into a unique vernacular for him. The Detroit Series was born from there. It’s primarily auto parts that connect and refract various freeform lines and visual planes. “I think in terms of geometric shapes, pleasing forms to the eye, interconnecting lines that enhance the solid forms.”

And the ugliness is part of that. Bell’s not afraid of what he calls “aggressive postures” in his work. “I like a certain amount of edginess through it being primitive-looking. Nothing I make is shiny or well-polished or painted. It always has a rough, unfinished look.” He’s navigating a glut of broken circles that are refractions. It is the embodiment of jazz: many things going in many different directions but coming from one core. There is a balance to its many shapes and a harmony to its various limbs. But it is very much a thing of its own type. Surefooted and ready to take risks.