SOME SAY INANIMATE OBJECTS CAN HAVE INTENTION because our handling of them infuses them with energy. Artists face this when working, especially when trying to work purely viscerally. For Marcus Hewitt’s Lego series, this much seems to be true. He can start with a color and, once given the spotlight, it refuses to change its role. In one work, Hewitt became attracted to a certain blue. The piece sprouted from there and if he were to try to move the blue or hang it upside down, it wouldn’t work. It knows it was the foundation and that’s where it wants to stay.

For a graphic designer who studied fine art—and whose inanimate objects happen to be Legos—the artworks belie a sense of intention. Hewitt had been working as a painter when the Lego fields fell upon him. The idea that the works could be stylistically minimalistic was part of the appeal. But also, the plastic-y flatness was infatuating. “I’ve always liked minimal-style pieces—oils or acrylics, more traditional painting. I was a sculptor in the past as well. So that was the appeal: a premade material that someone else hadn’t really used. And something that had dimension. There’s lots of contradiction to it because it’s built for dimension but I’ve stripped that away again and I’m making it flat. And I love the finish of it. The shine.” 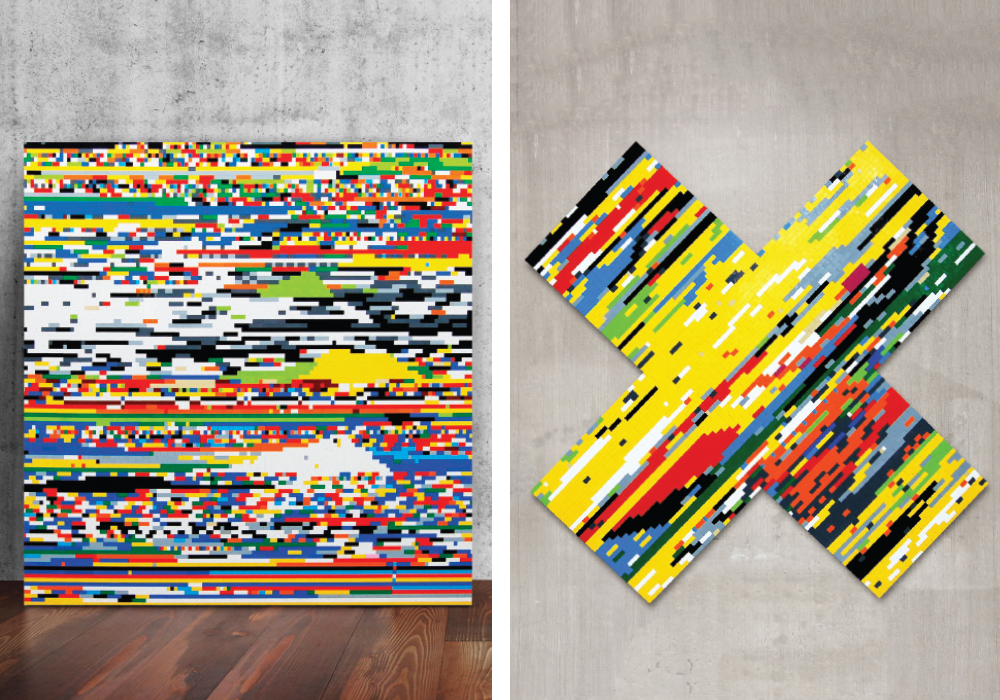 Hewitt does not plan the compositions and finds it’s the spontaneous grouping of colors that makes them work. In a way, subversion is also an element. “Legos are the most precise bit of engineering ever…you can buy a [old] Lego piece at a yard sale and it will fit now. They’re perfect. And then somehow, to lay them out in a random way goes against that perfection.” That contradiction further shows itself when a viewer, only allowed to see their flat sides, doesn’t instantly recognize the bits as Legos. For many appreciators, it’s all about the bright horizontal tracts and nothing more.

“It’s just a new way of getting color. I’m doing it in an abstract, minimal way.”

Hewitt is excited by his newfound medium. Still, he’s not bleeding Legos—he does not want to be known as “the Lego guy.” It’s about an articulation of color and repetition, much like what he appreciates about the work of Dan Flavin and Donald Judd. But it’s also very much about being his own. “I’d be making it up if I said there was a system…you stick two pieces together and you’ve got something…it feels random but… it’s like whistling. You can’t be sad if you’re whistling…this is joy and celebration.” It’s the experimenting that excites him most.