IN 2009 MARK PERRY EXPERIENCED A WATERSHED MOMENT. As an artist who always worked in oil and, for the most part, composing literal representations of landscapes, he gave up the rigid approach for something far more interpretive. His new direction is more about a “brokenness” rather than what he refers to as “a safe painting with an overall connected feeling.”

From there, a series of large paintings sprang forth. “Pacific Coast” (94” x 89,” 2011) was such a departure. Working with negative space was new for Perry. And there is a disembodiment that happened, both on the canvas and also for him, who went from a literal to a gestural place. His palette remains grounded in landscape and he is still drawing from a compositional sensibility, but “it’s all about the movement and getting the paint to the canvas as fast as possible without trying to think of anything concrete.” He’s “attacking with paint…creating space, creating compositions that are intimate up close and from a distance appealing as well.”

Perry works with brushes and rags, calling heavily upon the blue and green surroundings of nature but also pink, lavender and dusty, full-weighted colors. It might very well be that his career spent painting patterns for womenswear informs the feminine sensibility of his hues or it’s just his faithfulness to landscapes. 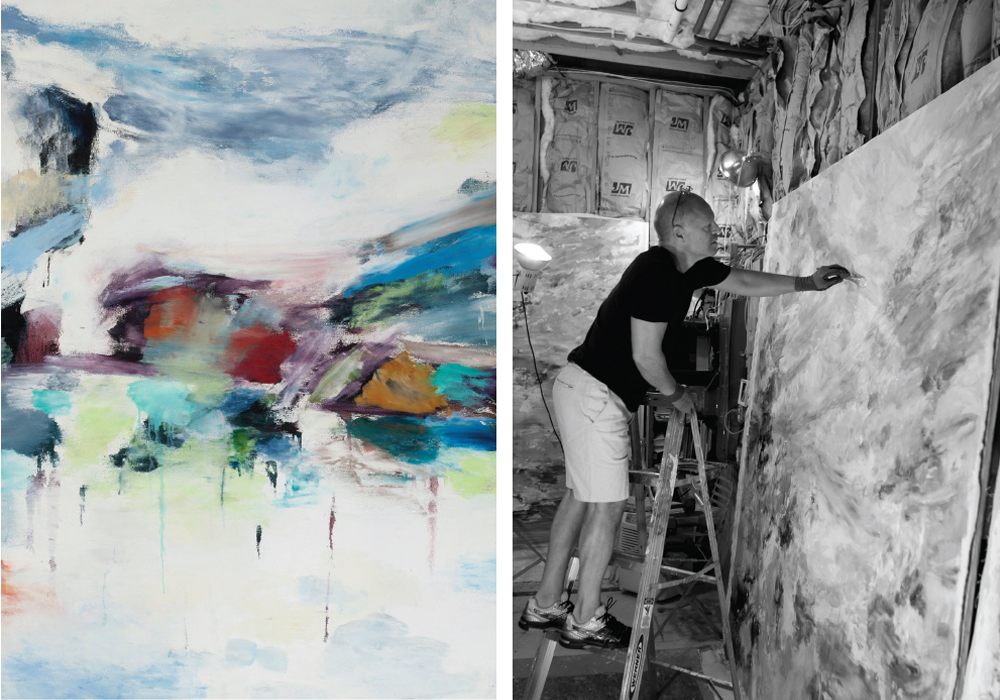 The scale of the painting also has an effect. The larger the canvas, the more frequently fully-formed, color orbs appear. “The painting process is immediate. Sometimes I try to slow it down to be with it a little longer, and I like that, but I don’t think a lot of this would happen if I were really deliberate…I try and keep the movement…my mark is pretty free…With oil, it might be the medium that directs me…it’s intuitive in the beginning and then I do start to make decisions.”

Exploring a 92” x 92” piece and being able to focus on just one 6” x 6” quadrant is an instructive part of the exploration for Perry. Vacillating between the sizes has an effect on his technique, particularly because he doesn’t change his instruments. He’ll use the same 1-inch brush for both scales. And he likes working with rags because they can make big, bold impressions or fill in an area quickly. He avoids using larger tools, like a 4-inch brush, because he doesn’t want to finish a painting too earnestly.

His “Seasons” series from 2014 is evidence of this. The four paintings are vertical representations standing at 92” x 54” but the viewer can also choose to hone in on just one small piece of any one. Whatever the outcome, Perry enjoys creating visual fields that can either be focused on in the micro, in the macro or as things that fade into the background to contribute a beautiful, pleasing influence on an environment.