MANY AN ARTIST CALLS UPON FOUND OBJECTS to materialize his vision, but Nathan Slate Joseph insists his are “chosen” in the pursuit of making works about expansion and contraction. Whether they are his paintings on paper or wall reliefs constructed of steel, they are serious stuff, both dense in construct and meaning: they are statements of destruction and construction.

Joseph is acutely impacted by current affairs and images of war and terrorism in the news. His works are his interpretations, but he’s not trying to preach—abstraction keeps them far from being didactic. Rather than attempt to recycle his motivations into art, he’s making physical re-applications of his feelings in solid forms.

He “connects to the world in this way” and is creating visual triggers to provoke our responses. “Good art has got to be sensual and appeal to one of your senses. You all of a sudden, by acquiring it, become the owner and you have to protect your decision…we always want to be in connection with our five senses.” Initially, the artist worked only with paper but became a sculptor because “I like materials. I like to play with my hands and do sculpture…I didn’t have a good relationship with paper because if you make a mistake it’s limiting, where material like [steel] you can reuse.” He currently works through both mediums, creating pieces for the viewer to feel something, like the freedom of a field of daffodils as in his yellow patchwork “Sacred Stone,” or using metal to connote a caravan of ships’ hulls, or sails, to recall the wind and a sense of movement. “I don’t control it too much. I listen to the materials and they tell me where to go…I want people to be surprised by what they see more than me telling them what.” If a piece needs to change direction midstream, he can cut up the metal, reshape it and reuse it to find another manifestation for it. 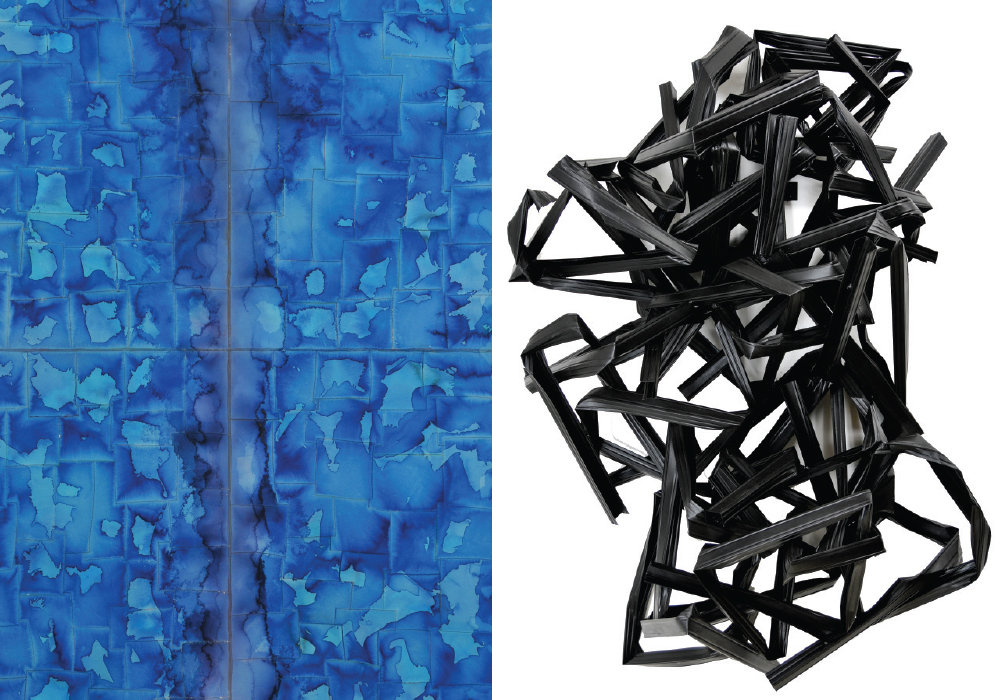 When working with paint, the opacity is as important as the hue. “I can’t just paint color so it looks nice on the wall. Colors are nice. But how do you get colors to speak to you emotionally, rather than just visually…The application of pure pigments…getting the quality of the paint to be softer…[the process] is more than just something painted on a surface. It gives the quality of something that’s in the surface…it’s color, age and time.” And he uses the colors symbolically. In his “Deltitnu” series, the mangles of metal are reminders of buildings destroyed in war. Black is an obvious choice, but they were also done in primary hues to—well, you decide.

Joseph thinks anciently. Growing up near Jerusalem, he knows about walls and he uses his art to construct friendly studies of walls both metaphorically and literally. He’s removing the limitations of their boundaries by just letting them be. Which, it seems, means his work can also be interpreted as being about neutrality.