Walking into Grain’s woodshop at 11 Indian Wells Highway, the first thing I noticed was the smell. My notes read like a haughty wine taster’s impression of a terrible pinot noir: wood shavings, glassing resin, glue…Although such descriptors are bad news in the wine world, they’re highly desirable in the context of a surfboard building business.

The essential concept at Grain—a new DIY wooden surfboard enterprise in Amagansett—is immersion. It’s a little like renting a bench for a master class in Surf Santa’s workshop along with a few other ocean-enthusiasts. Participants gather early for a hot breakfast, catch some waves and test some boards in the morning, then spend the rest of the day in the shop. People discuss their lives, their children and their favorite surf stories; the role of DJ goes to whomever has an interesting playlist on his or her smartphone. Often, the entire operation is moved outside so the class can work in the warm sun. The goal at Grain may be to shape a super cool, cedar surfboard all by yourself, but the process is definitely as important as the finished product. 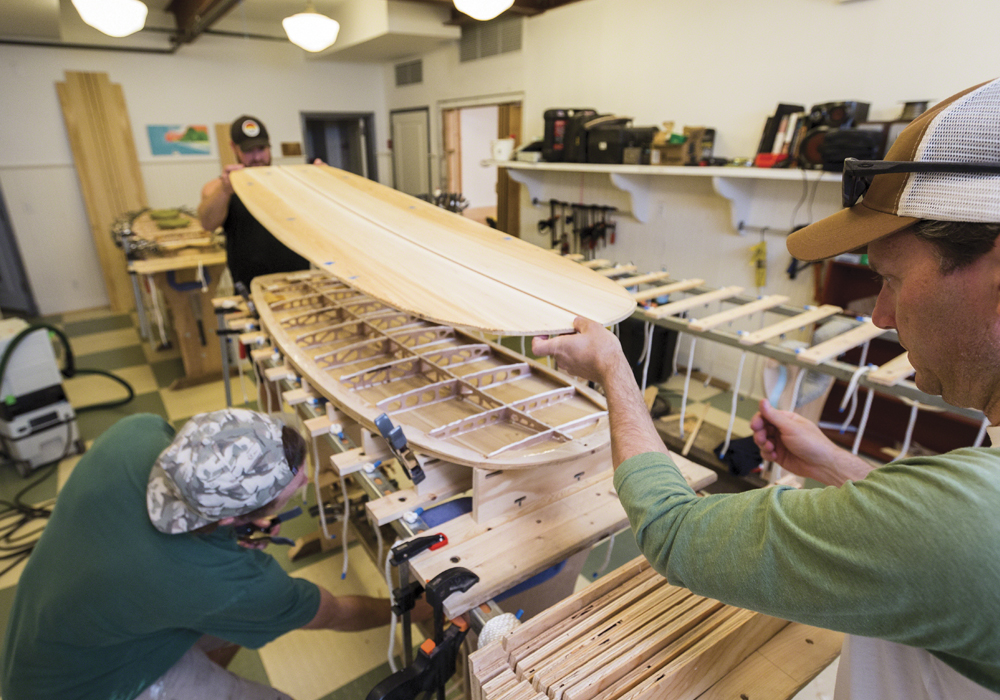 The deck of a Grain mini-Simmons is low- ered onto the rest of the surfboard where it will be tied down to dry. image: peter brauné

Grain Surfboards was founded in York, Maine, by Mike LaVecchia, whose CV already included experience as a boat builder, a ship’s captain and a Vermont-based snowboarding industry pioneer. LaVecchia moved to Maine in 2005 with the intention of “surfing more and driving less,” and said the fresh start cleared his head. Invigorated, he began to combine his woodworking experiences with his passion for surfing. The result grew into a new venture: Grain Surfboards.

After building the business in York for a few years, Grain began to expand in a unique way. An old school bus and a 1966 Grumman Step Van (formerly used for bread delivery) were repurposed as mobile workshops hosting shaping clinics from coast to coast. Then, in early 2016, a second Grain HQ broke ground in Amagansett. The business, which held its opening celebration in May and began to offer classes in June, is operated by Brian Schopfer and his wife Aynsley. The couple, their two children and dog Luna moved to New York from Rhode Island specifically to open the shop.

Before becoming a pro board builder, Schopfer was a property manager who crafted furniture in his spare time. His love affair with Grain began in 2013 when he attended a workshop in Maine with his brother-in-law, Patrick Fleury—co-owner of the Amagansett location.

“I liked that it was both beautiful and functional,” said Schopfer, who was born to the snowier boardsports of Colorado. “I liked that it was all hand tools too. It isn’t loud and smelly. Building these boards is peaceful and fun. And coming out of that with a beautiful, finished board is amazing. On the drive home, Patrick and I both agreed we had to do this. I had the woodworking background and he had a surfing background. He lives in Amagansett and we thought the area was great. There are waves here and an arts-friendly culture. Perfect.”

After some location-location-location snags the brothers-in-law discovered an empty space in a defunct arts school. The building, reminiscent of an old red barn, seems as custom-made as the boards themselves. The space is airy, the setting is bucolic and the reliable swells of Ditch Plains are only 20 minutes away. 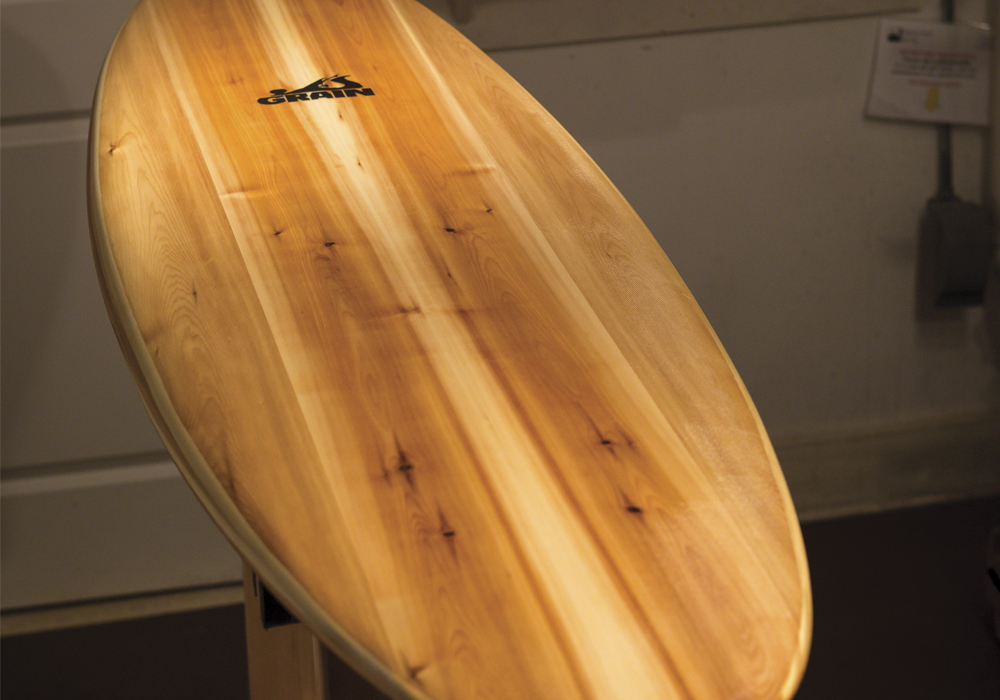 Prior to the big day at Grain, I was a bit nervous. I have some experience with tools, but almost none with woodworking. And when I browsed Grain’s Instagram albums, I found photos of intricate projects festooned with forests of handclamps and made from hundreds of individual parts. This was obviously going to be harder than assembling a Sürfbörd from Ikea.

No worries, brah! From the moment Schopfer gave me a Japanese handsaw and showed me how to hollow out grooves for a rail (the side of a board), I knew I had what it took. The process at Grain has been refined to ensure that just about anyone will be successful in building a beautiful board—many of their students wouldn’t know a spokeshave from a spud wrench.
At the midpoint of my first day I realized that handclamp positioning was going to be very important. I was running a long, thin rail piece about a quarter-inch thick along the side of the board. The rail was hollowed along the bottom, allowing it to dovetail with the rounded top of the other rail below. The assembled rails needed to form a convex curve so the board would have rounded sides, but it was difficult to place the clamps off-center without them popping off.

Schopfer stepped in. First, we dotted the load-bearing ribs of the board’s inner frame with superglue. This functioned like a tailor pinning your cuffs in place before he begins sewing. The superglue held everything together, which allowed the clamps to be positioned correctly and to coax an attractive curvature into the rail. Later, while struggling to get a shaving tool to bite into the wood, “Rollin’” Nolan Collins—the Maine-based driver of the ex-bread van—showed me how to get some momentum in my stroke before angling the blade down.

The Grain guys and gals understand which parts of a build are tricky and they ended up answering many questions before they were even voiced. There are parts of the process—such as joining the bottom of the board to the frame—that require multiple pairs of hands, and in these instances there’s an Amish barn-raising quality to the proceedings that truly typifies team-building.
Further fool-proofing the Grain program is an in-house Rumpelstiltskin Department that can advance a build overnight if a participant falls off pace. For example: I had only two days to work on my board (most people enroll in three- or four-day workshops). When I walked in for the first time I found that my project had been magically fast forwarded to the Day Two starting point.

Back to the Board Drawing 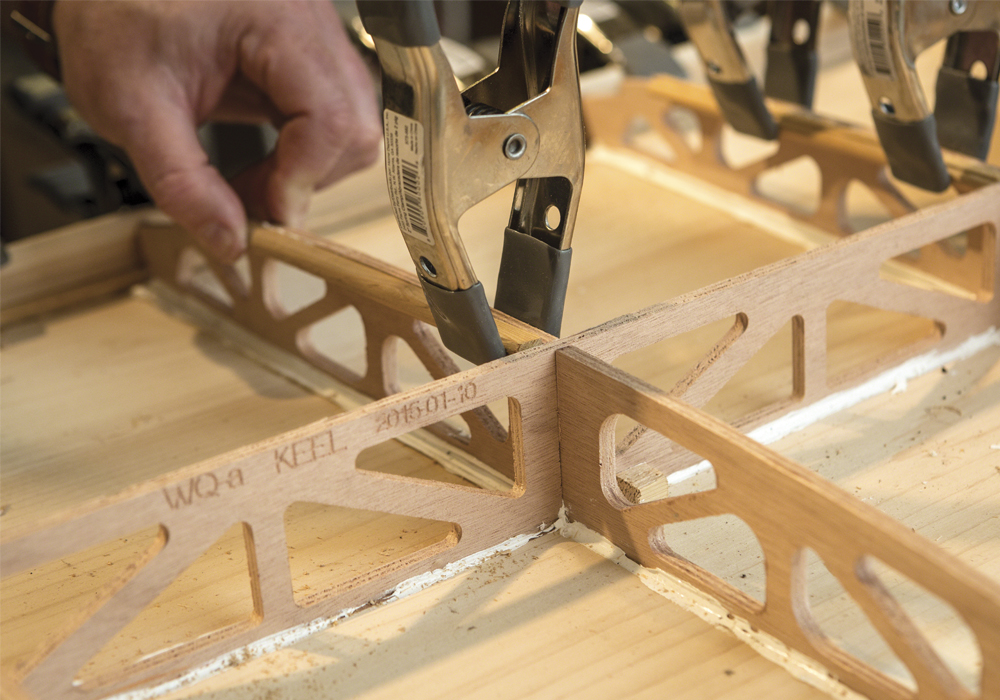 Although the building process is complex and detailed, Grain’s instruc- tors are always on hand to ensure success image: peter brauné

Grain offers 16 templates ranging from the behemoth 12-foot Dreadnought to the performance-oriented Biscuit, which was designed by the legendary Al Merrick and ranges from five-foot-six to six-foot-two. The board I worked on was a six-foot-three mini-Simmons—a stubby shape intended to produce the same languid, Endless Summer-style ride as a longboard.

Many of Grain’s root shapes are available in multiple sizes and every board is minutely personalized by the builder during shaving and shaping. The boards are typically slightly heavier than their modern material counterparts, but the weight differences grow smaller as the size of the board increases. In fact, a hollow, wooden 10-footer may weigh less than a solid polystyrene or polyurethane board in the same dimensions. The durability of the wooden boards is another advantage, since wood doesn’t dent as easily as foam and won’t snap in half when you wipe out during a big day at Waimea Bay.

When a typical client enters the studio on Day One, his or her surfboard will exist only as ingredients. There are individual racks of planks, rails, prefabricated structural ribbing and a veritable lake of marine adhesive. Over the course of a few days these elements will slowly coalesce into a surfboard. There are power tools in the workshop, but the majority of the labor is accomplished using a Quaker-like collection of hand planes, chisels and paddle-shaped Japanese hand saws.

Part of the beauty of the Grain experience is that there’s plenty of time to perfect and personalize. Some boards are stained, others are left untouched. Some incorporate repurposed wood or feature interesting bookmatched knots and burls that add visual interest. Some are clean. “The second I finished my first board I started planning my second,” Schopfer told me at one point. I understood exactly what he meant. Because you build a Grain board yourself, the finished product will always have a more nuanced, personalized history than something off the rack.
Any surfer will tell you that when you spend hours floating on a surfboard you become intimately familiar with every aspect of its surface. One of mine is wrapped in a carbon fiber weave and there’s a stray thread caught in the glassing that I must have noticed and re-noticed 25,000 times. This isn’t a negative, by the way. That wayward filament is much more beauty mark than blemish, and it gives me something to look at on small days and between sets. The point is: every scratch and ding on a surfboard tells a story. And with a Grain surfboard all those stories begin and end with you.

Going With The Grain 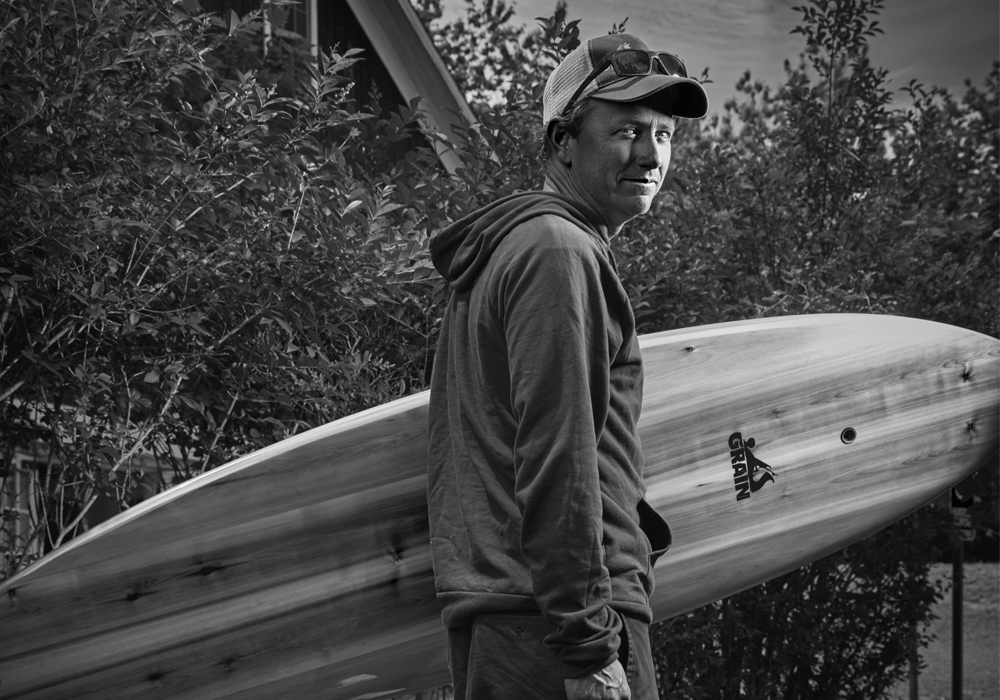 There are three ways to obtain a Grain surfboard: You can buy a board the staff has assembled for around $3,500; you can buy a kit and plans for about $100, or you can join a workshop for $2,650. Although Grain sells many boards and kits, the classes are by far the most popular option.

Workshops are offered in three-, four- and seven-day packages; longer stays can also be arranged with advance notice. Some students bring their boards home for glassing—the process of painting the board with resin to protect and seal the wood—but most leave them to be glassed in-house. This process carries an additional charge and the board is shipped to the builder once it’s ready to ride.