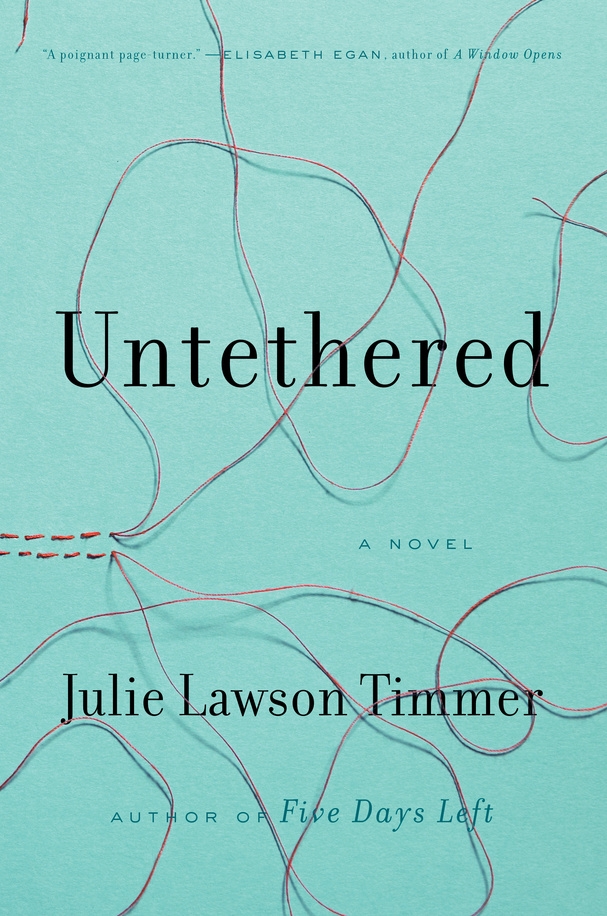 Oh, the ties that bind.

Be they familial, friendly or formal, the relationships you’ve made in your lifetime have given you many interesting days filled with ups and down. But, really: would you ever have it any other way? Of course not, unless, as in the new novel Untethered by Julie Lawson Timmer, one of those ties becomes frayed.

Char Hawthorne hadn’t been looking for a husband.

She was excited to be living in Washington, DC, and working a job she loved; dating wasn’t even on her radar, until she met Bradley. He lived in Michigan, a divorced geek with a pre-teen daughter and though Char wasn’t looking for a husband, it didn’t take many trips north for her to fall in love with man and child.

And now Bradley was gone, victim of a car accident on a winter’s night.

Grieving aside, there was much to do, plans to finalize, decisions to make, loose ends to tie. There’d been times over the past five years, for example, when they’d discussed Char formally adopting Allie, Bradley’s daughter. Many times, but the conversation usually ended without action, something Char deeply regretted. Once a wife and stepmother, she was now neither.

That meant she had no rights when it came to Allie. And Allie’s mother, Lindy, seemed to suddenly want her daughter with her in California.

Or did she…? Lindy hadn’t seen much of Allie while Char was in the picture; she didn’t call much and she seemed relieved not to have to be responsible for a now-fifteen-year-old girl. Even though Allie was such a great kid, a caring person, Lindy didn’t seem to have time for motherhood.

That hurt Allie a lot, Char knew. She knew it because Allie suddenly went from perfect kid to terrible teen in a days’ time. She knew it because of the look on Allie’s face when her mother called. But when Allie took another family’s matters into her own hands by running away, Char knew that someone had to step up as a parent, fast.

It’s so, so easy to ease into a novel by Julie Lawson Timmer. You know by the end of the first page that you’re in for a great story, one that’s rich in detail, plotline and character development.

Untethered won’t disappoint you on any of those things. Timmer layers on plenty of tiny, everyday minutia in her books, things that give readers better, more vivid imagery. Characters are well-defined but unpredictable, just as they should be. As for plot, Timmer says in her afterword that one of threads in this book is something that really happens in this country and, while it might be somewhat far-fetched at times and maybe a bit too pat in this story, I can’t imagine being happier with any other ending or being half as satisfied.

This is a first-rate book group novel, or you can enjoy it in hammock, airport or office lunchroom. Bring a few tissues, but don’t miss it. Without Untethered, you’ll be in a real bind.