Basketball, soccer, the 100-meter dash and gymnastics are appointment viewing during the summer Olympics. But in between perennial favorites, Olympic binge-watchers are in for a few surprises, like learning that canoeing is a competitive sport. Embrace the unknown—it’s part of the fun. Get the lowdown on three Olympic events you’ve never heard of and find out where you can watch—and even participate in them—this summer.

The skinny: First introduced as a competition sport at the 1936 games in Berlin, sprint canoeing consists of 200-meter and 1,000-meter races for men and 200-meter and 500-meter races for women. There are singles and doubles divisions for each race. Canoeing races are broken down into two main disciplines: the slalom and the sprint. The aim of the slalom is to navigate a canoe on river rapids in the fastest time possible. Same goes for the sprint, except the water is calm. There are separate competitions for singles, doubles and teams of four as well as canoes and kayaks.
The rule to remember: Boats must stay at least 5-meters apart from each other, that way they do not benefit from another competitors wake.
The athletes to watch: Great Britain’s Ed McKeever, the gold medalist in the men’s single kayak 200-meter spring at the London Games, did not qualify for Rio 2016. Look for 2012 bronze medalist and current sprint record holder Mark de Jonge of Canada to vie for the top spot on the podium this year. New Zealand’s Lisa Carrington is the favorite to take gold in the same event on the women’s side. For a taste of national pride, keep an eye on Ashley Nee, who will finally get to represent Team USA in the women’s slalom kayak single after failing to qualify for the 2008 and 2012 games.
The dates to tune in: The slalom will run from Aug. 7-11 and the sprint from Aug. 15-20.
The DIY way: We live on an Island—finding a place to row your boat isn’t too difficult. Pulse made five recommendations last month.

The skinny: Two teams of seven players (six outfield players and a goalkeeper) use their hands to pass a ball. The objective is to get it into the other team’s goal. Matches consist of two 30-minute periods and tend to be fast-paced and high-scoring. Expect to see 50 goals scored in a single match.
The rule to remember: Lacrosse players will be able to relate to this rules, but FYI for everyone else: outfield players are not allowed in the crease.
The teams to watch: France enters the tournament the two-time defending Olympic champion. Germany captured its second straight EHF Men’s Handball title with a 24-17 win over Spain in January. Defending champion Norway, along with Russia and home team Brazil, are the women’s favorites.
The dates to tune in: The men’s quarterfinals are Aug. 17, semifinals Aug. 19 and finals Aug. 21. The women’s quarterfinals are Aug. 16, semifinals Aug. 18 and finals Aug. 20.
The DIY way: Burn off that corndog on Coney Island’s handball courts. 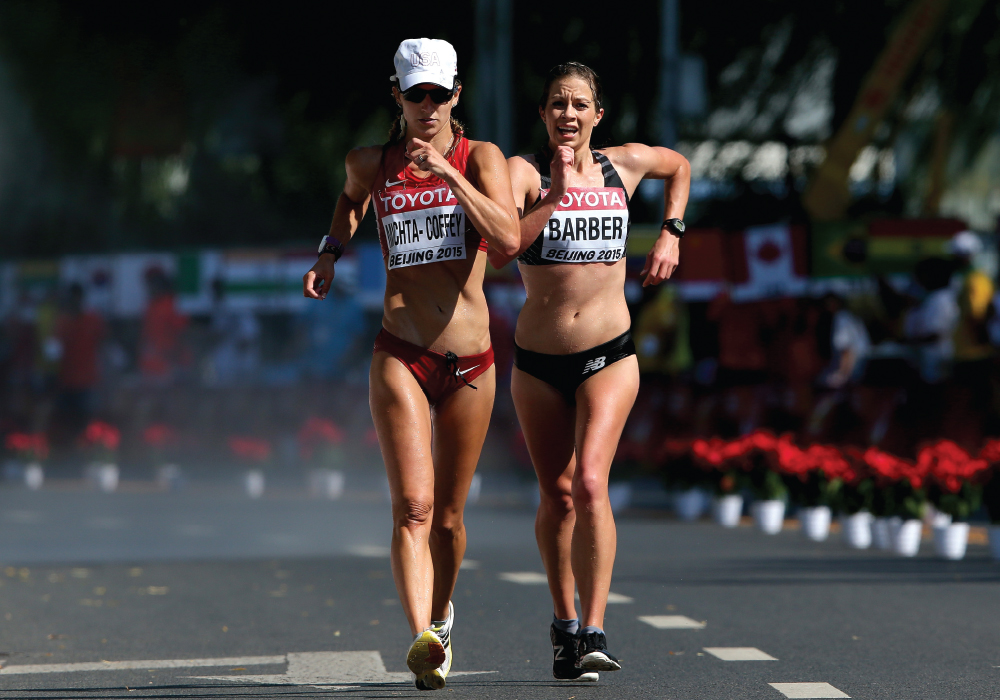 Maria Michta-Coffey (left) started race walking just to stay in shape but is now one of the top Americans in the sport. image: lintao zhang

The skinny: If you think New York City commuters walk with determination, wait until you tune into race walking. At the 2016 games, there will be separate 20km races for men and women.
The rule to remember: The leading leg must be straightened as the foot makes contact with the ground.
The athlete to watch: Long Island’s own Maria Michta-Coffey, a Sachem High graduate, will compete in her second Olympics. Learn about her journey in the July/August issue of Pulse.
The dates to tune in: The men’s race is Aug. 12 and the women’s is Aug. 19.
The DIY way: Make like the neighborhood jogger Joe and hit the sidewalk.