East End Mushroom Company’s farm isn’t what you think. Nestled between sprawling vegetable farms and vineyards on Sound Avenue in Cutchogue, you won’t find any dirt or see owners John Quigley and Jane Maguire spending hot days in the sun. Quigley and Maguire grow, pick and ship their mushrooms out of a shopping center warehouse.

“Being hydroponic, state of the art, we don’t fight the elements like snow and wind and cold,” said Quigley, who worked in construction and finance in Pennsylvania before opening East End Mushroom with Maguire in 2012.

That doesn’t mean it’s easy. The staff of five, including Quigley and Maguire, work together to operate the largest mushroom farm on Long Island, and expecting the unexpected is part of the daily routine. The phone can ring and it can be anyone from the chef at Nick & Toni’s calling for a special shipment or someone from Gotham asking to use the farm’s mushrooms as props.

“Without a doubt it’s the craziest thing we’ve ever done,” Quigley said. “It’s like owning a boat. You keep putting money in it and you wonder, ‘Will it float? Will it sink?’”

Take a glimpse into the controlled chaos.

5am: Quigley wakes up, throws on jeans and a polo and heads to 7-Eleven for a 24oz coffee with French vanilla creamer. “Something as simple as the right creamer can set your day off right,” said Quigley. “My kids say I drink kiddie coffee because the coffee goes up three quarters of the way and the rest is cream.”

5:30am: Quigley opens the door, sorts some paperwork and maps out a plan for the day. The office has two desks, one for himself and one for Maguire. On Fridays and Saturdays, it transforms into a retail space, where East End Mushroom sells 11-14 types of mushrooms. They grow four on site (shiitake, gray and yellow oyster and maitake) and others like Portobello and Crimini they purvey from Kennett Square in Pennsylvania, where they first learned to grow mushrooms. “We get a lot of foodies,” Quigley said. They all seem to have the same question: are the ‘shrooms hallucinogenic? “Janie handles the people the best. Sometimes I feel irritated, but she just rolls with it.”

7am: Mario Deliz clocks in. Deliz started about a month ago and manages the grow room, which includes picking and packing mushrooms. A quick learner and relentless worker, he has already been a godsend for Quigley. “He only worked 60 hours last week,” Quigley laughed. “It takes a very unique personality to do this, somebody who enjoys peace and quiet without the stress.”

A few house rules: The room must be at 60-62 degrees and the humidity at least 99 percent. “If you’re having a flat-hair day, we can fix that,” Quigley said. When entering the grow room, people must put on a medical mask to protect themselves from inhaling the spores, which can cause mushroom cough. 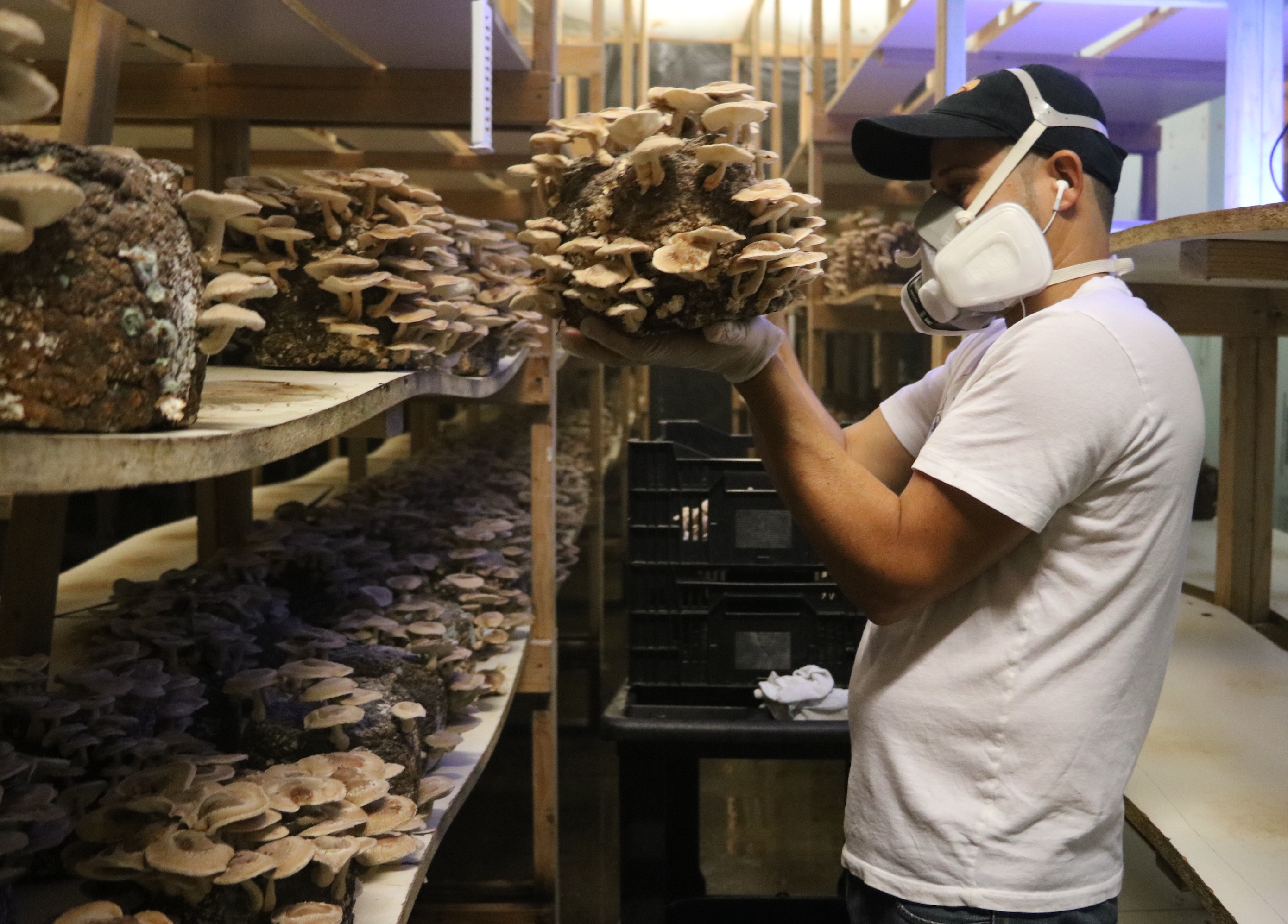 Deliz manages the grow room and helps Quigley pick about 450 pounds of mushrooms about twice a week.

7:30am: Deliz starts picking mushrooms. East End Mushroom ships to restaurants on Mondays and Thursdays, making Wednesdays big prep days. Deliz and Quigley will pick about 400-450lbs of mushrooms today, all by themselves. The company picks and ships within 24 hours to ensure freshness. Otherwise, Quigley says, “They might as well go to [a mass food distributor].”

8am: Dave Flanell arrives. He doesn’t know it yet, but he’ll be making a special, small early delivery to Nick & Toni’s. “They’re one of our biggest customers so you don’t say ‘no,’” Maguire told me later.

8:15am: Maguire bounces in. She and Quigley dated in high school in Newport, Rhode Island and reconnected 32 years later on classmates.com. “She believes in this just as much as I do. If your boyfriend tried to convince you to sustain yourself for the next three plus years on an income growing mushrooms, what would you say?” Given that I thought my boyfriend was sort of crazy for starting his own law practice, I’m honestly not sure.

8:20am: East End Mushroom’s public relations representative Rachel Bosworth comes in to meet with Maguire about the company’s second annual cook-off to benefit East End Hospice. Local restaurant chefs will bring their best mushroom recipes and cook for hungry guests, who will choose the winner. Noah’s won last year with a mushroom dumpling. On today’s agenda: T-Shirts, which will go to the first 200 ticket buyers. Though the final design is still being worked out, it will absolutely include the company motto “Shiitake happens,” which is a hit with guests.

Maguire is more of the creative arm of the company, something she embraces. “I’ve worked in stores and manufacturing and you’re kind of told what to do. Here, it’s our own company and ideas of what we want to do, our concepts and not anyone else’s.”

8:30am: Quigley checks bags of oyster mushrooms in the walk-in room, where mushrooms go to “wake up” in 38-degree temperatures before moving into the grow room. Mushrooms are popping through the small black plastic bags, a sign they’re ready for the next stage. The mushroom bags aren’t the only things bursting through the seams. The shelves in the 160-square foot room are filled to the brim. “This room isn’t big enough,” Quigley said, shaking his head. Within the next year, Quigley hopes to triple the size of the staff from 5 to 15, move the grow room to another location nearby and make the current grow room a part of the prep area. “I have all the reason to believe that will happen,” Quigley said. “The locals have been tremendous. People believe in us.”

8:45am: Quigley tells Deliz to soak shiitake logs in large green barrels. The logs, which are made of red oak sawdust, vegetable gelatin and paper pump, need moisture to allow shiitake mushrooms to grow. Deliz stacks two barrels full of logs and secures with a pine wood top. “It holds the logs down so they don’t float or pop up,” Quigley said. Deliz runs water for about five minutes. In two hours, the water will begin to evaporate and he’ll add more water to make sure the top logs stay submerged.

9:05am: Flanell takes 10 boxes of shiitake, oyster and maitake mushrooms out for delivery to Nick & Toni’s. Dave and the ‘shrooms will listen to The Grateful Dead on their way over. “Dave is a huge Deadhead,” Quigley said. When I brought up the recent Dead & Co. show at CitiField with John Mayer, Dave’s eyes lit up. “Mayer was incredible,” he beamed.

10am: Quigley checks on Deliz, who is still picking, and then heads to his desk for paperwork and phone calls. He is working on negotiating with Whole Foods and Trader Joe’s.“These are the accounts you want to go after. Restaurants are not busy year-round, they’re seasonal. If we don’t expand to other markets, we’ll become seasonal.” He and Maguire are also planning to launch an online retail store in September.

10:30am: A representative from OurHarvest, a supermarket that’s part farmers market, part CSA, comes in to pick up three boxes of shiitake, Crimini and Portobello mushrooms. Like East End Mushroom, OurHarvest is an up-and-coming business on the North Fork. “We’re growing together,” Quigley said. 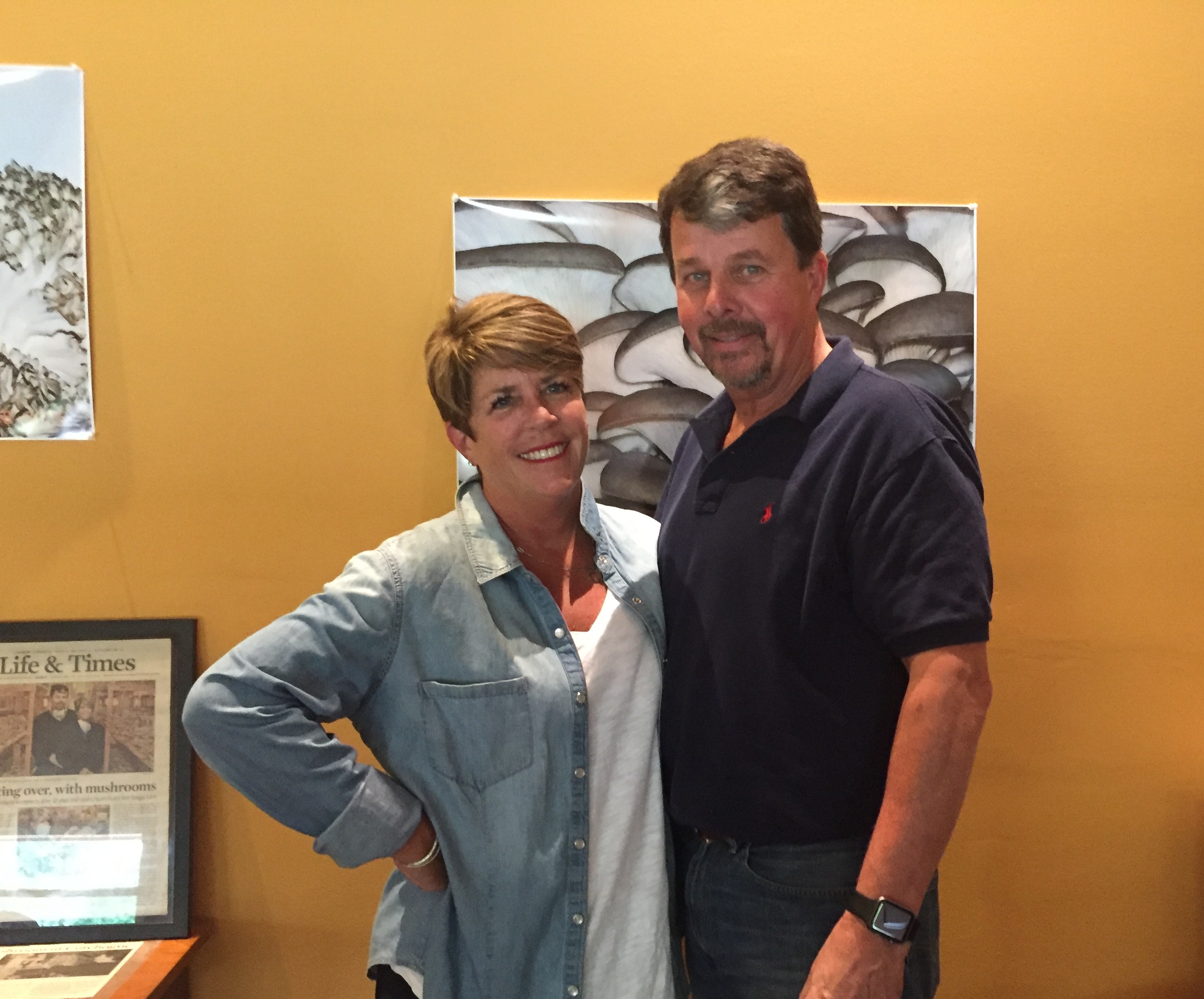 12:30pm: Maguire returns and she and Quigley meet with a bank interested in taking over their account. “I’m constantly amazed that people are still interested in what we’re doing, but we’re trying to grow. The day we can’t answer a phone call we’re in trouble,” Quigley said.

Speaking of fascinated, Quigley lets me in on a little-known secret: East End Mushroom’s mushrooms starred in Season 2, Episode 15 of popular TV show Gotham as the “magic mushrooms” Ivy grew to gain control over two of her nemeses. A crewmember for the show, which shoots in NYC, called the office out of the blue to ask for them and, like they do for Nick & Toni’s, Quigley and Maguire happily obliged.

1pm: Deliz leaves to help a family member. “He works so hard, but I want him to be able to be there for his young family.” Quigley continues to pick, while Maguire texts the restaurants they supply mushrooms to. “Mushrooms tomorrow?” it reads.

4pm: Quigley starts to wind down. He takes time to go over and complete logs of what he and the staff did today and begins to plan out the following day.

5:30pm: Quigley shuts down his computer and heads out. He tries to leave by 6pm every day. “At some point, family is more important than the business, and we really try to hang onto that.” Today’s post-work cool down will likely include playing with the couple’s two dogs, a Westie named Peaches and a terrier, Finnegan. “We put the dogs on a raft and they just float around on the raft,” he laughed.