Donna Periconi has three grandchildren, ages 6, 12 and 14, who know Bay Shore’s Main Street as a place mom and dad take them for family dinners at local restaurants and where they can stroll the bustling, clean sidewalks beneath seafaring lampposts.

Periconi tells them the stories of the Bay Shore she moved to in the 1970s, a place she referred to as “a sight unseen.” She tells them of a town in such disrepair in the mid-1990s that, as president of the Bay Shore-Brightwaters Chamber of Commerce, she held meetings twice a month to come up with ways to save the community. Her store at the time, deLuca and Mullarkey Antiques, was one of the few open on a Main Street that was 43 percent boarded up and vacant and served as the meeting spot. They listen intently, but look at her in the way some may have once looked at their grandparents when they told stories of walking miles in the snow just to get to school. It’s an exaggeration, hyperbole, grandma being grandma.

“They don’t know it was the way it was and they don’t believe it. They’re amazed of the things we did,” Periconi said.

You can’t blame them. Today, Bay Shore is booming. Bobby Herrick of Century 21 Herrick Realty estimates Main Street is only 5-7 percent vacant, a rate he says is lower than 95 percent of Long Island’s other Main Streets. It also has 125 apartment units expected to be built within the next year. More than a dozen restaurants have opened on Main Street in the last five years, a far cry from the 1990s. Back then, most business owners didn’t even have Bay Shore on their radars. Take Morgan Flynn, who grew up nearby in Islip and whose family runs Flynn’s, the popular Fire Island restaurant.

“There wasn’t anything there to warrant people wanting to come into Bay Shore to open businesses,” Flynn said. He and his family opened the area’s first oyster bar, Salt & Barrel, on Main Street in March.

Go ahead and call it a comeback, one that took a village. 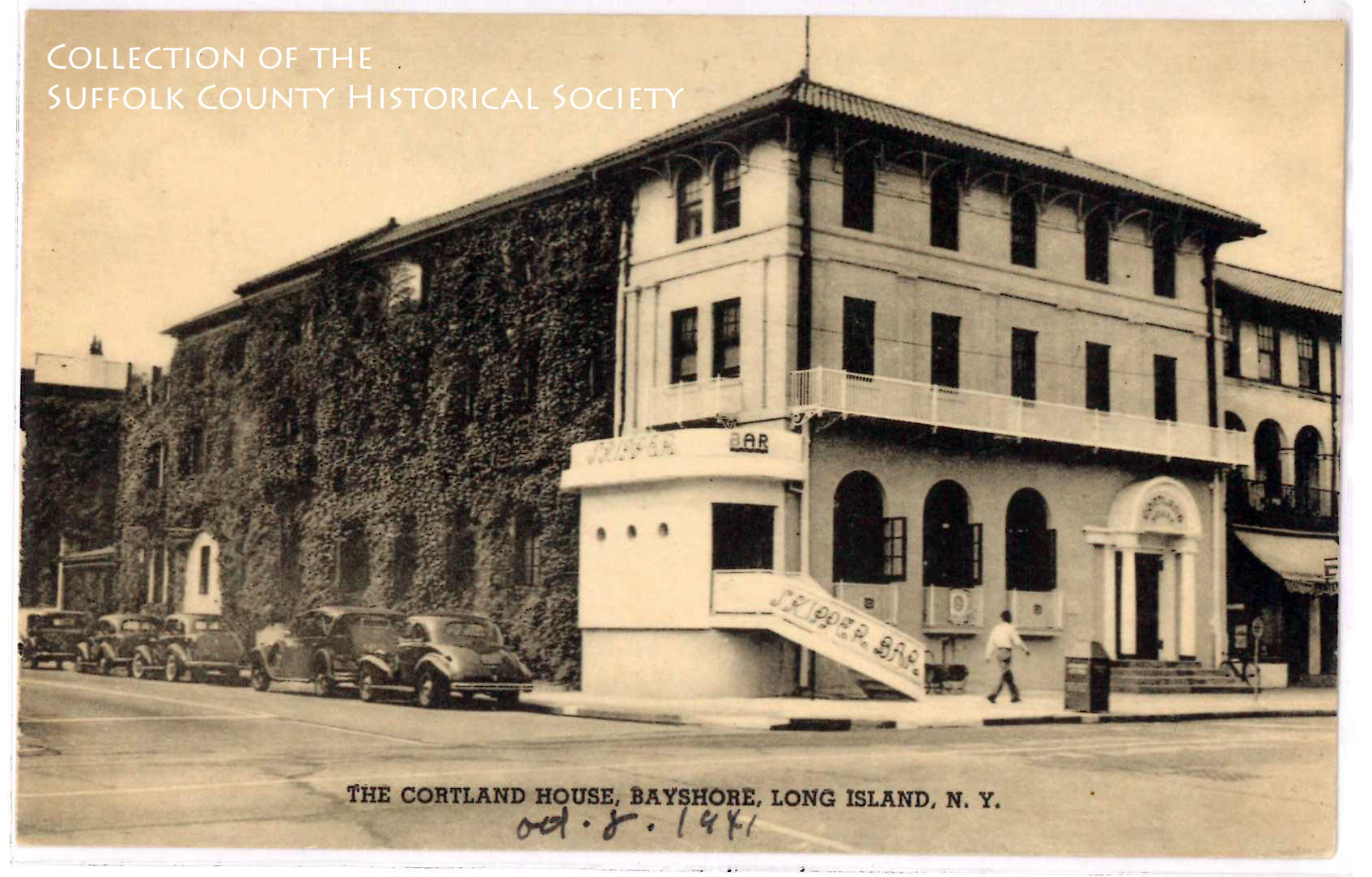 History means everything to Periconi. In the mid-1990s, other business owners, police officers, firefighters and school officials gathered at her antiques shop to strategize Bay Shore’s future. During the meetings, it was just as important to Periconi to rediscover the area’s past.

Bay Shore held an air of Hamptons regality at the turn of the century. There were resort hotels and people like the Gulden family (of Gulden Mustard fame) called it their summertime destination. Before Hollywood was Hollywood, New York was the place to shoot a movie and Bay Shore served as a popular backdrop. Vitagraph, a Brooklyn-based studio that made hundreds of movies, opened an eastern outpost in Bay Shore in 1915. Silent films like “Keystone Cops” were shot there, and actors like Marlon Brando, John Bunny and Edith Storey came for their close-ups. Charlie Chaplin even owned a Bay Shore home. 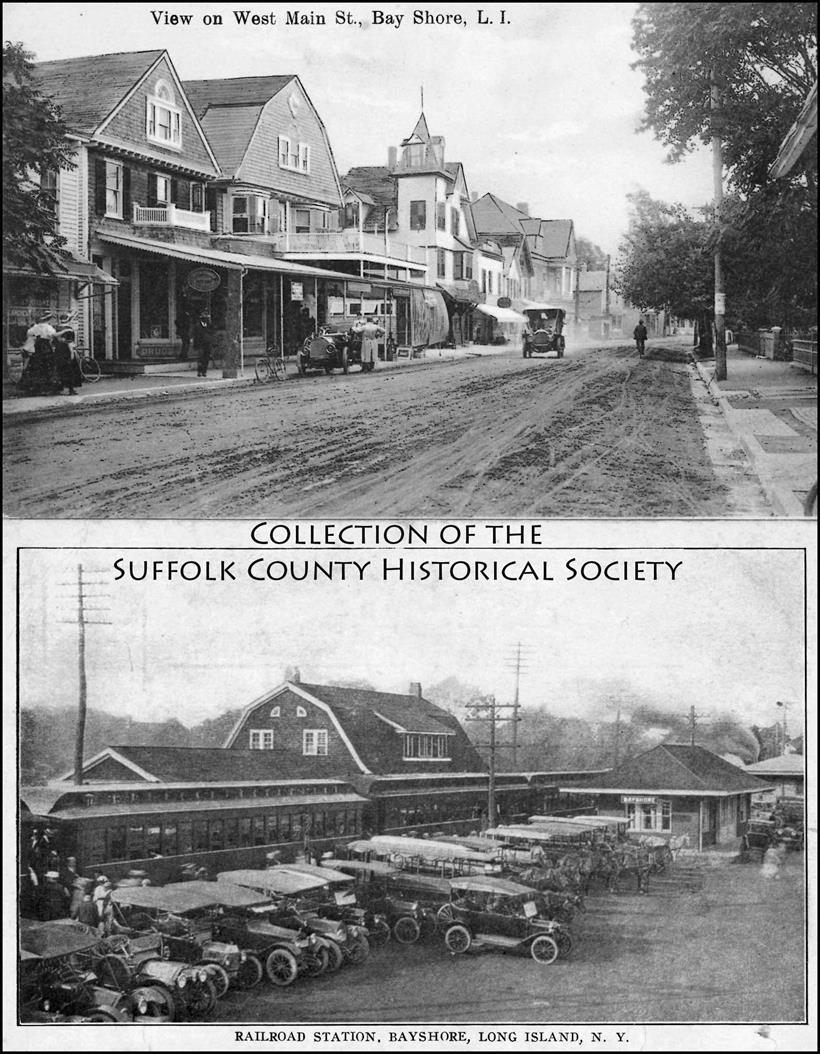 The 350-year-old hamlet boasts a marina overlooking the Great South Bay that is about a 15-minute walk from Main Street and is grounds for fishing, boating and wading. When Periconi moved to the area in the 1970s and saw Santa Fe facades, beige adobe-style storefronts that looked better suited for an Old Western movie than a nautical town, she immediately knew the area had lost its identity.

“I remember saying to my husband, ‘You have taken me to a God-forsaken place,’” she recalled. “Our name is Bay Shore. Why would you put up Santa Fe façades? Do I need to say more?”

The introduction of the South Shore Mall, now Westfield South Shore, in 1961 brought juggernaut chains like Macy’s and JCPenney’s to the neighborhood, making it difficult for local shops to compete, Herrick and Flynn both said. And others have their opinions as to why Bay Shore fell into disrepair, but decades later the debates tend to center around where to eat next.

In October 1991, the Great South Bay YMCA opened on the west end of Main Street. The hope was to bring families to the downtown for community events and activities, but the surrounding area still didn’t look like much. It was mostly vacant and lacked landscaping. The Town of Islip began applying for and receiving Intermodal Transportation Efficiency Act grants, which they put towards lining the sidewalks with seafaring lampposts and brick pavers to make the strip more attractive.

“We were recapturing our identity next to the Great South Bay,” Periconi said. “We had to do beautification because otherwise there was no other way to lure businesses into the downtown.”

Main Street got another boost when the hospital joined the North Shore Health System (now Northwell Health) and Touro College School of Arts & Sciences outgrew its Dix Hills facilities and came to town.

“We became a college town,” Periconi said. “We had students who came into our downtown, teachers and professors who walked the downtown. The Y was to bring in pedestrian walkers. We needed to make Main Street a walking community again. The college did the same thing.” 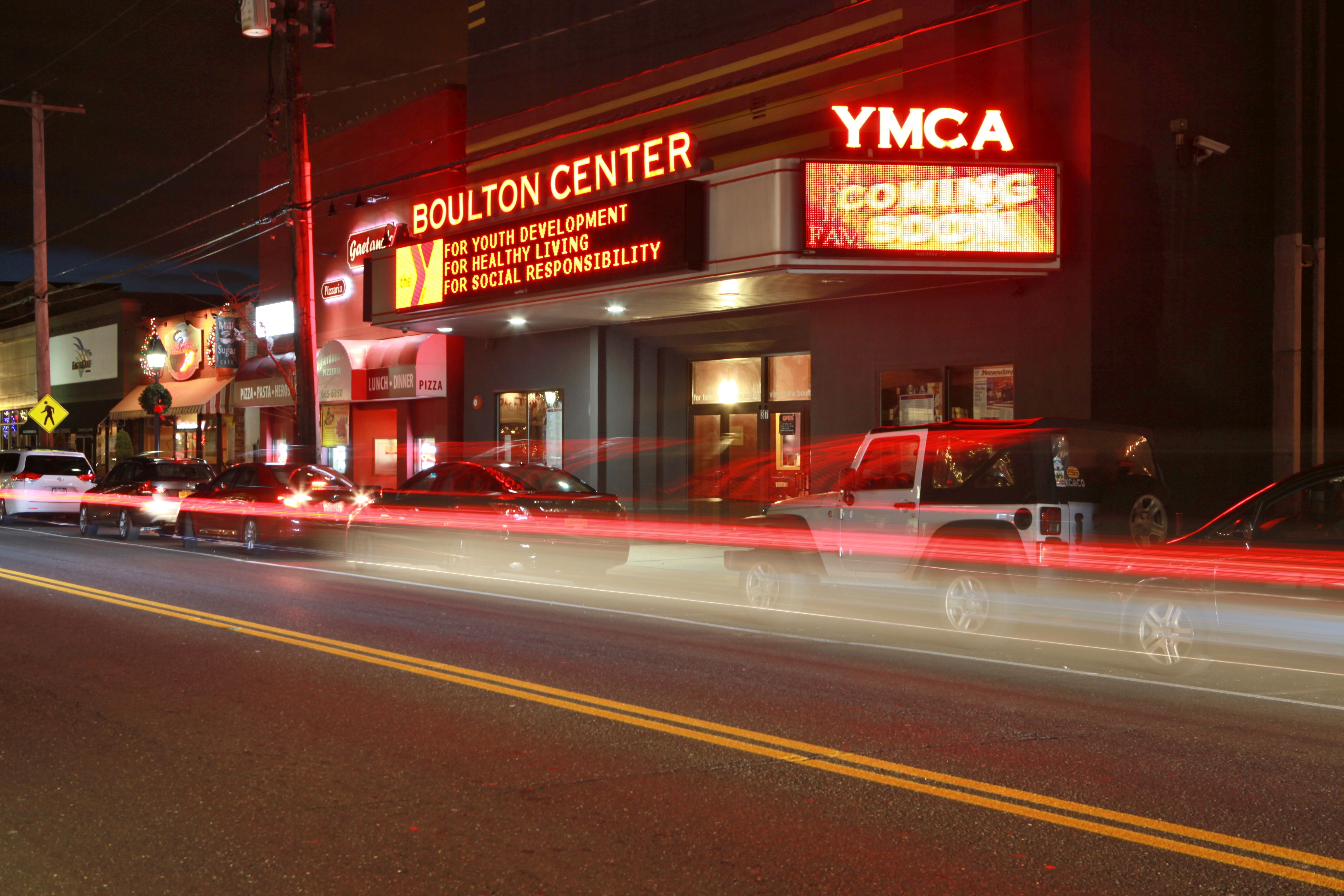 The opening of the YMCA Boulton Center represented a pivotal moment in Bay Shore’s revival.

The progress caught the attention of Frank Boulton, a Bay Shore native who found success on Wall Street and wanted to give back to his childhood hometown. Boulton felt the need for a community hub at the strip’s mid-point and launched a $6.2 million campaign to turn a blighted single-screen theater into an intimate entertainment hub. In 2003, the YMCA Boulton Center opened. Today, the center features four shows per week ranging from nationally recognized musicians to plays put on by summer campers.

“Patchogue has its performing arts center, Riverhead has a preforming center so my thought pattern was kind of correct,” Boulton said. “Having the ability to see top entertainment in a small-size venue, to have something where you don’t have to travel or go to the arena, it’s an option. We have beautiful beaches, but you can’t go to the beach all the time.”

When the Nutty Irishman opened in 2003, it became a driving force in Bay Shore’s nightlife scene, recalled former bartender Anthony Tartaglia, who opened upscale Mexican restaurant Verde on Main Street two years ago. But it was Aji 53’s 2007 debut that he and others point to as Main Street’s turning point. 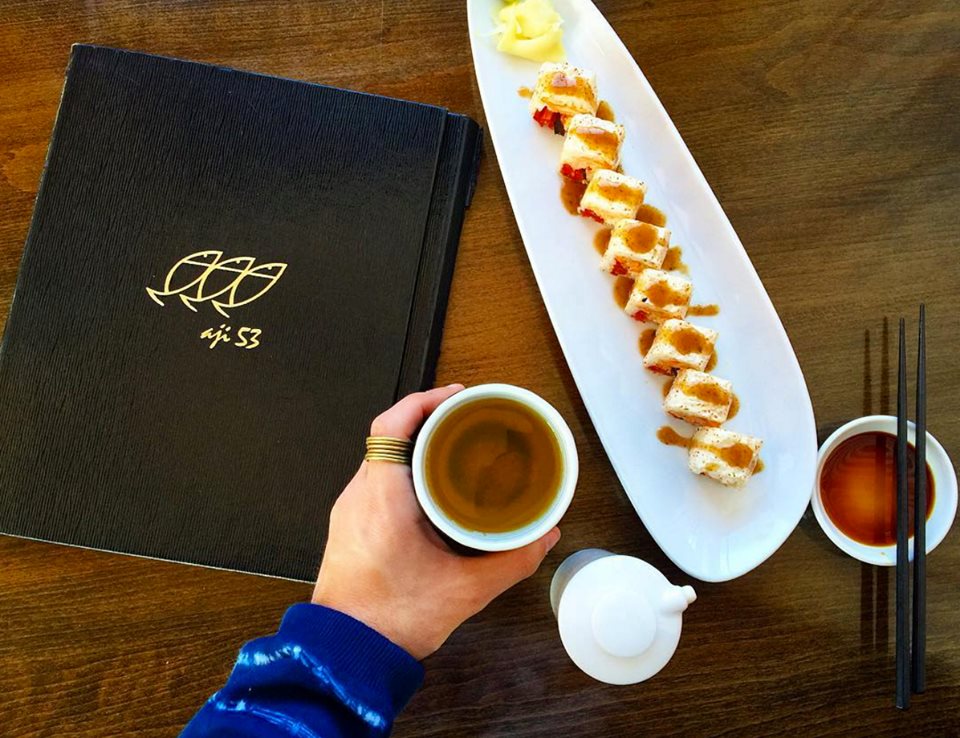 Some point to Aji’s debut in 2007 as a turning point for Bay Shore.

For Aji’s owners, opening Main Street’s first sushi restaurant was a leap of faith. On their first visit to Bay Shore, former general manager Kevin Wang recalled there was a building burned down across the street and homeless people. But they saw promise. It paid off.

“For some reason Long Island has an insatiable appetite for sushi,” said Flynn, who also credits The Lake House’s 2006 opening as a seminal moment in Bay Shore’s evolution as a foodie town. “All of a sudden people didn’t have to go to Babylon for it. In my opinion…Aji started making Bay Shore a destination for food.” 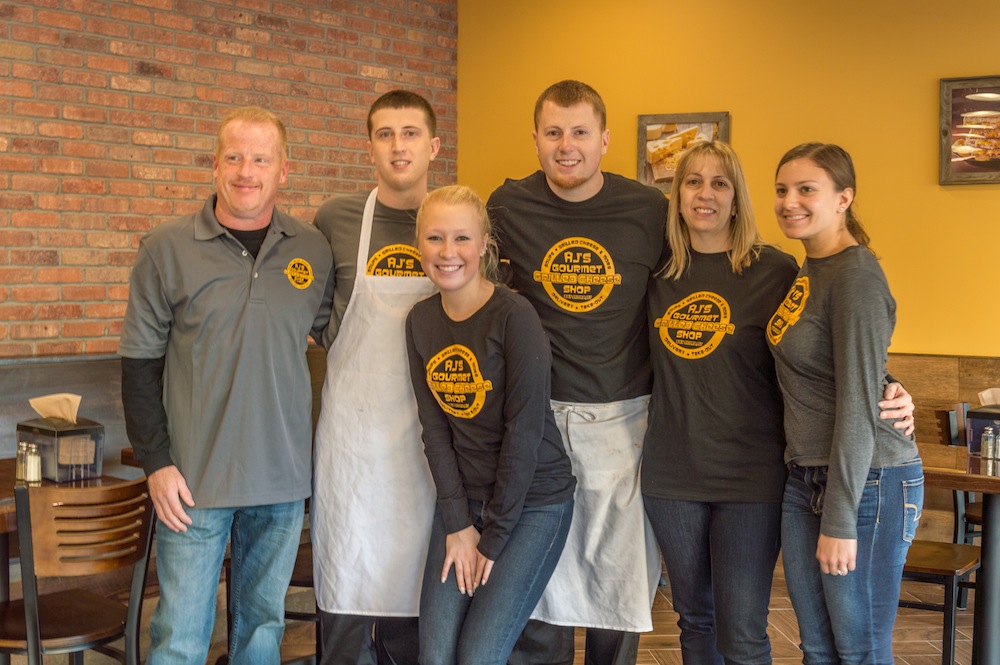 Bay Shore was transforming once again, going from a nightlife town to a foodie haven. Aji’s success had prospective restaurant owners looking as closely at Bay Shore as they were other emerging towns like Patchogue and Riverhead. And many have liked what they saw. Tullulah’s, a restaurant ahead of the small-plate curve, opened about two years later, and Changing Times gave the street a gastropub. Now, restaurants are opening as soon as space becomes available. AJ’s Grilled Cheese Shop, Salt & Barrel and Local Burger Co. opened this year. The town even began a farmers market in May.

“There’s still bars but I feel the restaurants have had more of the spotlight the past couple years,” Tartaglia said. 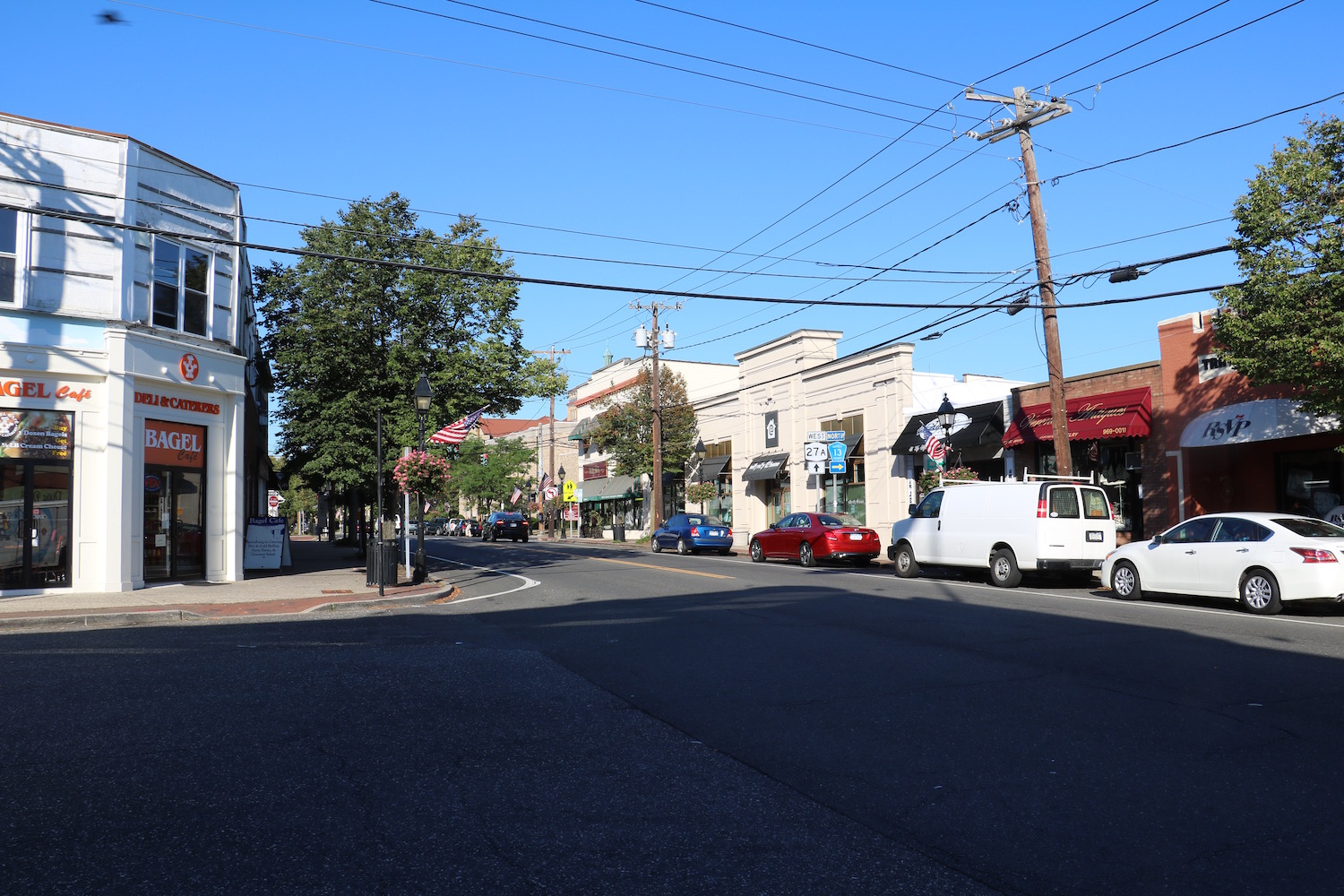 Main Street is bustling, and Bay Shore hopes to beautify the path to it in the coming years. image: Mary Demaio

Bay Shore’s Main Street has become a dinnertime destination. As the rest of the Island catches on, the town is working to make the area more attractive. There’s talk of beautifying the path from the train station to Main Street and waterfront areas with bike trails and more decorative lighting.

Herrick hopes the addition of apartment complexes continues to bring young professionals into the area. It’s more than just an investment in the restaurants, Main Street and the town’s immediate future. It’s an investment in the next generation of Bay Shore residents and business owners, people like, perhaps, Periconi’s grandchildren.