IMAGINE THE “VENUS DE MILO” snapping to life and vamping down the runway in the latest provocative haute couture. Rolls-Royce has created the car-version of that scenario with the new Dawn, combining timeless classicism with a sexy stance for this recent addition to their evolving model range. Aiming at a younger, more exuberant customer, the Dawn, like the recent sport-oriented Wraith, maintains traditional Rolls-Royce values—defined by classic proportions and unmatched build quality—while pushing performance and design to more visceral extremes.

The sumptuous convertible for four is the most personal and seductive Rolls-Royce yet. The makers even go so far as to call their new creation “sexy,” a risqué admission for a company with a typically stiff upper lip. Designers took their cue from the rare post-war Silver Dawn Drophead, of which about 28 coach-built examples (custom made from just a chassis) were produced between 1950 and 1954, 12 with bodies by famed British coachbuilder Park Ward. Two such examples survive in America, one of which accompanied the official launch of the Dawn this past April at the Belmond El Encanto in Santa Barbara, Calif. 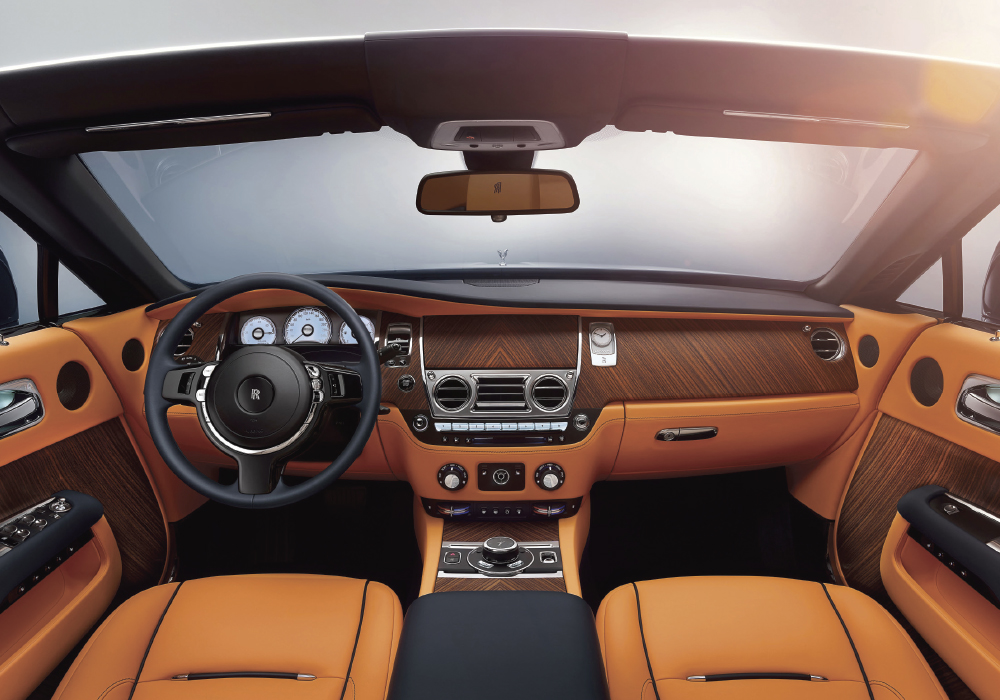 In both shape and proportion, the Dawn is glamorous and youthful. Yet it maintains the high shoulder line and low-cut greenhouse (windshield and windows) that establishes a Rolls-Royce silhouette so distinct one can identify it even under a cover. Such proportions impart a sleek, sporting profile to a big car where the driver sits high above occupants of cars literally lower in stature.

Central to the Dawn’s raison d’être is a multi-layered fabric roof that is as aesthetically successful raised as it is lowered. The Dawn’s is the quietest soft top in the world, dropping silently in just 22 seconds and at speeds up to 30 mph. The Dawn is dignified, utterly silent with the multi-layered fabric top raised, and sufficiently quiet with the top down to allow an unstrained four-way conversation without shouting, something a Rolls-Royce owner would never do. 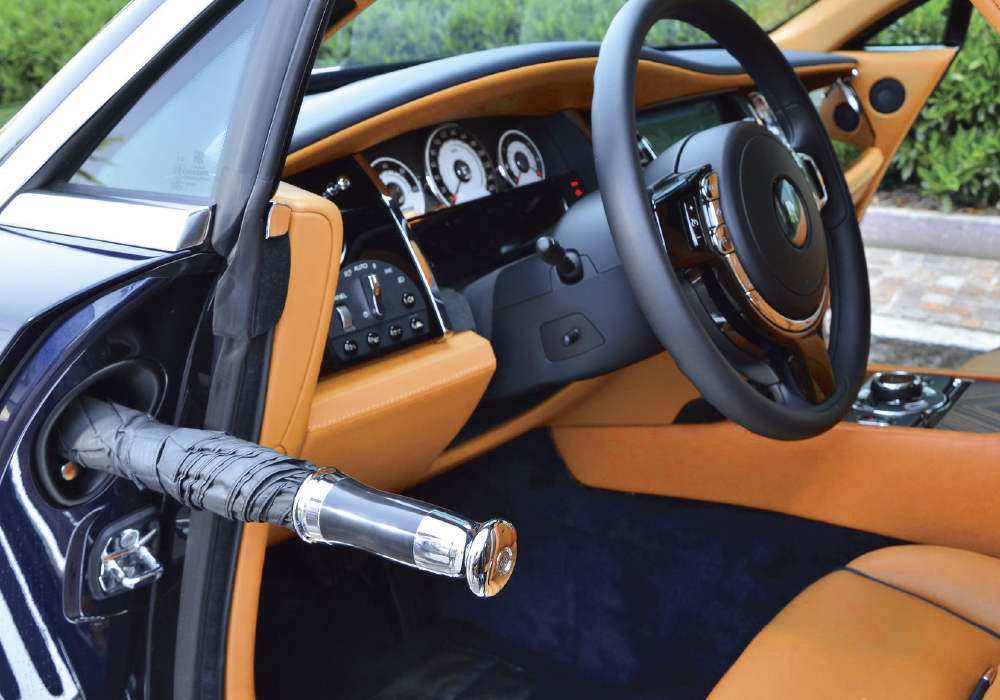 It also accomplishes what most convertibles cannot, which is to ensconce four full-size adults in unbridled luxury, without taking away an inch of head, elbow or foot room. Like all modern Rolls-Royce coupes and convertibles, the Dawn’s contrarian doors are hinged at the rear and open wide to allow more elegant ingress and egress than traditional front-hinged doors. Stowed in either front doorjamb is an umbrella that ejects from hidden stowage at the touch of its R-R-tipped handle.

The spacious cabin is covered stem to nautical-themed stern with leather, matched wood veneer and shiny hardware that might appoint an exclusive jeweler’s showroom. Seats offer lounge-chair comfort, and lamb’s-wool carpets encourage barefoot driving. Interestingly, the Rolls-Royce Bespoke Audio system brandishes no logo at all, and the powerful 18-speaker system uses noise-cancellation software to attenuate exterior noise, adjusting for optimal acoustics with the top down. 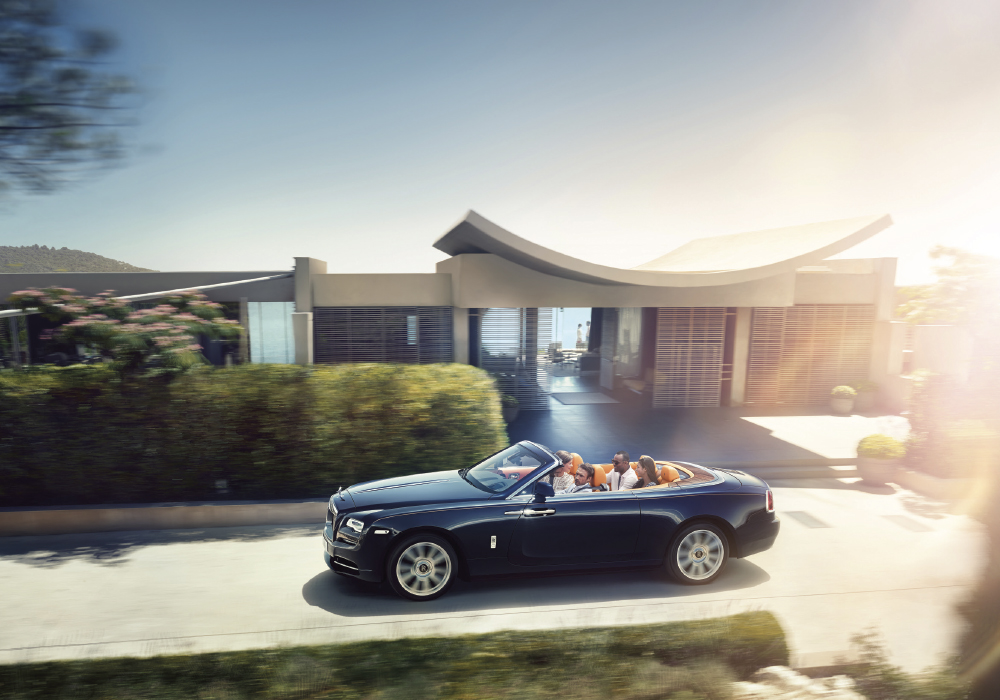 But the Rolls-Royce is not just a rolling jewelry box. A curb weight of 5,644lbs (only the Wraith is lighter) makes it hard to imagine the Dawn in league with Italian exotics, German bahn-stormers and American hot rods. Just tickle the accelerator to unleash a torrent of torque, a Niagara Falls of power that makes the Dawn an absolute blast to drive. Acceleration is blisteringly quick. And when the twin turbos spool up, the Dawn pulls like a Big Boy locomotive down a grade.

Yet there is nothing unseemly about the way Dawn lays down power; its manners are never inelegant, largely due to the inimitable ride. She glides over roads, keeping composure even when thrown into corners (if one indeed throws a Rolls-Royce), challenged by exuberant and sporting drivers who appreciate the capable handling dynamics and bottomless pit of power.

Part of Dawn’s superb and seamless manners are due to an 8-speed, satellite-aided transmission that uses GPS data to select the ideal gear for optimal shift-points and performance. The driver also benefits from such technological aids as active cruise control, a night-vision camera and head-up display.

The Dawn has a base price of $339,850, but can breeze well beyond the half-million mark, since customers with patience can commission artisans from the company’s Goodwood plant to option it with crocodile skin, blue denim or anything in between. The reward for such perspicuity is a personal sanctuary with the timeless allure of a Venus.