In 1937, Solomon R. Guggenheim created his eponymous foundation looking to turning his vast collection of artworks into a public display. Originally, the Guggenheim was known as The Museum of Non-Objective Painting and was housed on East 54th Street. It was here that Guggenheim first shared his collection of American and European abstracts. In 1952, the Museum was renamed for its founder and in ’59, found a permanent home in Frank Lloyd Wright’s iconic structure on Fifth Avenue between 88th and 89th streets. The museum’s first curator, Hilla von Rebay, conceived the space to be a “temple of the spirit,” allowing a new way of viewing the pieces.

“Our founding collection is based on Solomon Guggenheim’s fascination with avant garde painters of the early 20th century, particularly those dedicated to a particular form of abstraction with utopian and spiritual aims,” said Tracey Bashkoff, the Guggenheim’s senior curator of collections and exhibitions. “His goal to collect innovative contemporary work has carried forward through the decades resulting in a collection with rich holdings of abstract artwork at its core.”

Wright was not in love with New York City as a destination for the project. He found the city noisy and congested. But the site’s proximity to Central Park was a saving grace and ended up providing the inspiration needed as Wright  set out to create his creative oasis amid the urban cacophony.

Wright’s unique spiral staircase design was polarizing at the start. Many artists and critics of the day opposed the structure, claiming its bold design would overshadow the works housed within and the buildings nearby. “On the contrary,” Wright wrote about his work on the structure, “it was to make the building and the painting an uninterrupted, beautiful symphony such as never existed in the World of Art before.”

More than 50 years later, the end result seems to be a mutual elevation of design and content. The building remains an artistic revelation itself, one that shows Wright’s dedication to the marriage of nature and man’s ability to manipulate his surroundings, while also providing a sleek and welcoming space in which the works can shine. And while the Guggenheim’s reach has expanded dramatically since then, and its famed architecture has become a New York City landmark, it’s the core collection that remains its strength. 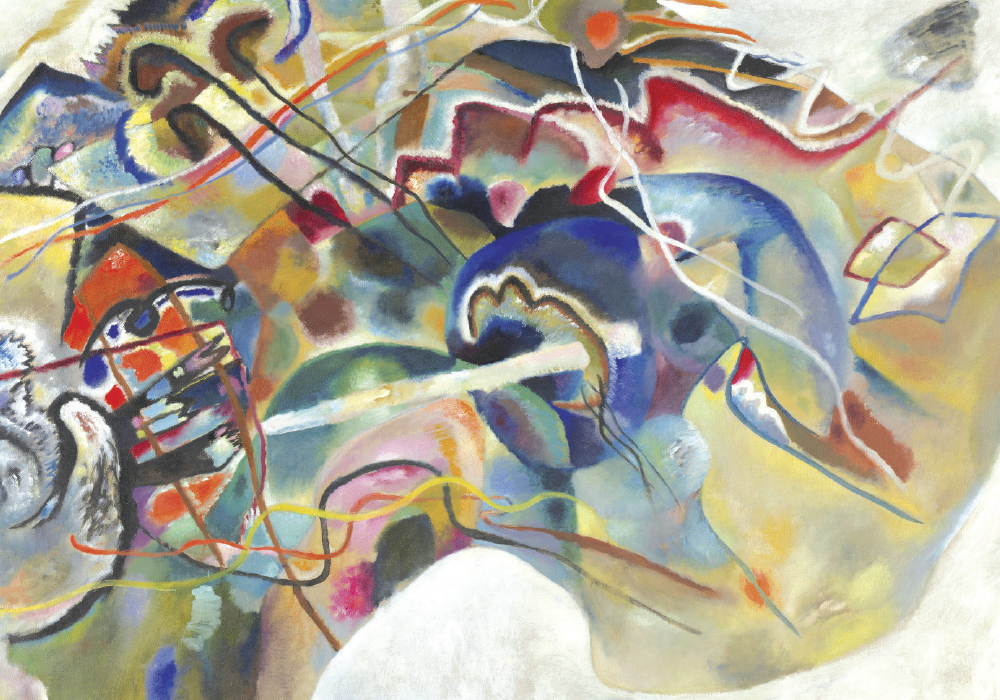 The permanent collection features hundreds of artists, but the abstractions of Vasily Kandinsky are most emblematic of the Guggenheim’s dedication to non-objective painting. More than 150 of Kandinsky’s furious, flowing abstractions are part of the collection. Although each can and should be regarded individually, as a whole they come together as an existential quilt, a trippy flag of formlessness that flies as the Guggenheim’s core mission statement.

“Vasily Kandinsky was one of the pioneers of abstraction and great theorists of modernism,” Bashkoff said. “He broke new ground in painting in the first decades of the 20th century by advancing a new subject matter based solely on an artist’s ‘inner necessity.’ It was his writings on spirituality in art and his paintings that most notably shaped the Guggenheim’s collection.”

“Blue Mountain” (1908-09, oil on canvas) is one of Kandinsky’s earlier forays into genre, though it’s rather structured compared to his later work. There is a stark volcanic mass in the middle and robust, primary colored trees on either side, providing a very clear understanding of Kandinsky’s lifelong love affair with color. It also gives us a peek into some of the artist’s influences: the traveling riders on the bottom are deferentially placed at the foot of nature’s massive power. The metamorphosis from figurative precision to impressionistic incandescence is reminiscent of Monet, whom Kandinsky has identified as a profound influence.

“That it was a haystack…informed me,” Kandinsky wrote of Monet’s “Haystacks at Giverny.” “I could not recognize it…I considered that the painter had no right to paint indistinctly. I dully felt that the object of the painting was missing. And I noticed with surprise and confusion that the picture not only gripped me, but impressed itself ineradicably on my memory. Painting took on a fairy-tale power and splendor.”

“Light Picture” (1913, oil on canvas) is more closely aligned with the “pioneer of abstraction” label often attributed to him. The piece is particularly compelling because, quite by happenstance, it seems to imply the view of the Guggenheim staircase from above, looking down. There is a faint circularity in the piece as it plays out like a soft tornado. With plenty of “air” circulating between the light brushstrokes, swirls of yellow, pink and red seem to appear, disappear and meld into one another. Deep inside the cone is the chaos and deconstructed splatter of thin blues and reds. There is no less a sense of color and wonder here than in his earlier works, but there is a greater sense of the inner world, the “temple of the spirit” that defines Kandinsky’s work, and the Guggenheim at large, as Wright originally conceived it.