SOMETIMES A SPACE WITH “GOOD BONES” can be found in unexpected places. Designer Barbara Lewis discovered this while house hunting in Glen Cove when she stumbled upon a former doctor’s office for sale. Whereas the back of the building was used as a residence, the front had been split up into small examination rooms and workspaces. Yet the seasoned designer could tell the floor plan could be adjusted to accommodate the openness she was looking for. “This really offered that possibility. And the beauty of it is that there is not one dead-end room in this entire house…it’s just one continuous flow.”

An existing stone fireplace in the back of the house was the initial inspiration. Lewis knew the double-story great room, tucked away behind a narrow doorway, could become the focal point for the house. “It was hidden. You didn’t know the room was there…I wanted that room to be visible from the entry hall when you walked in.” After several revisions of the floor plan, that goal was realized and the great room’s rustic fireplace and beamed ceilings served as a jumping off point for the décor throughout the rest of the downstairs.

Wanting an eclectic mix of timeless pieces and modern touches, Barbara and her daughter Meredith Lewis (the duo behind Lewis Design Group) sought to unite the various rooms with a mix of antique pieces, family favorites and updated fabrics. “We like to do things that are classic, but have a little bit of panache as well,” Barbara said. “Something current and youthful…so that it doesn’t look staid and passé.” 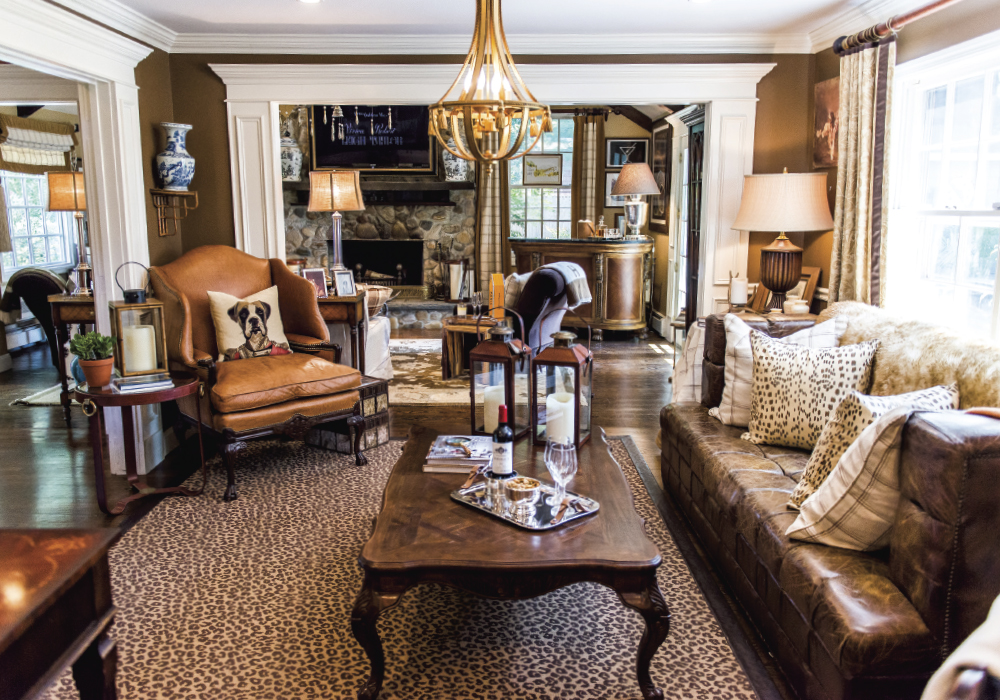 The beige/brown base continues, this time enhancing the natural stone replace and exposed wood oors and vaulted ceiling beams. The television becomes less of an eyesore and more of an accent when surrounded by a frame.

They started with refinishing some of Barbara’s treasured pieces, including a pair of sofas she received as a wedding gift from her father, who was in the furniture business. In search of more casual feel, the original white damask was replaced with a more rustic, slub silk and trimmed with chocolate brown tape. Similarly, a pair of bergère chairs in the living room was reupholstered in a modern animal print cut velvet by Cowtan & Tout. For a pop of personality, the backs are covered in linen and painted with the family’s monogram. Considering all of the changes, Barbara’s friends didn’t even recognize the same furniture from her previous house. “They thought I had bought everything new!”

The result is a mixed and matched blend of warm, inviting tones ranging from chocolate brown mohair club chairs to pops of orange on throw pillows. Touches of natural finishes such as raffia, leather and bamboo echo the raw feel of the stone fireplace. But they are balanced by the refined contrast of formal details like chinoiserie curtains in the dining room or an antique English library table.

According to the design duo, the real secret to mastering the collected look is finishing each space with an unexpected element. A piece of modern art among classical furniture or a funky fabric on a traditional silhouette keep the eye engaged. “It’s always great to have one exclamation point in the room.”