ON A BLAZING hot Saturday afternoon in July, Lori Goldstein was in one of the well-chilled studios at the headquarters of QVC, the home-shopping network based in West Chester, PA. Dressed in four layers from her signature LOGO collection—a leopard print tank, an abstract print top, a knit vest and a cardigan—she eagerly faced the cameras and explained her philosophy of “instant chic” where “everything just mixes and matches.” Speaking in fashion editor patois, she declared everything she had on was gorgeous, stunning, a-mazing—a Seventh Avenue shtick that comes across as improbably genuine and has made her a marquee designer at QVC.

Goldstein has grown to love doing live television, even when she has to pull all-nighters. Several times a year, she has what QVC calls a “Today’s Special Value,” and has to repeatedly pitch a single garment about a dozen times from midnight to midnight. “It’s insane—QVC is not for the weary,” Goldstein said. “The reason I am able to do it is because of the life I came from. I have gotten on a plane to Australia and gotten right off and gone scouting and then started shooting. A 24-hour day is an experience I have had a lot.”

BEFORE SHE BEGAN selling her own designs on QVC in 2009, Goldstein was one of the fashion world’s most imaginative and prolific stylists. In her 2013 monograph, Lori Goldstein: Style is Instinct (Harper Design), she described her job as a “dream catcher. A conjurer of fantasy. A partner to the photographer, to the subject, to the moment.”

For more than 25 years, she turned moments into indelible images in collaboration with star photographers like Annie Leibovitz, Steven Meisel, Bruce Weber and Mario Testino for magazines including Allure, Italian Vogue, Vanity Fair and W. She helped create iconic ads for American Express, The Gap and Versace. She also styled runway shows for designers such as Isaac Mizrahi who, coincidentally, has his own QVC spot right after her weekly one-hour show on Monday nights at 8pm. (She also has a weekly show on Saturdays 2-3pm.) “We share a green room. I have such great respect for Isaac. He cracks me up. He is a true designer. We understand the same world. But we are different and have different stories to tell.”

If Mizrahi is the designer as benign dictator, who promises his clothes will make a woman feel impossibly chic and au courant (even if she wears size 3X), Goldstein is the protective older sister/Jewish mother who wants customers to feel confident and effortlessly pulled together without being slaves to fashion. LOGO is her way of “giving back” and making fashion affordable and acces- sible. Her trademark is the free-style layering of colors, patterns and textures. “I am instinctively fearless about putting clothes together, which is the most important aspect. Because you can design the most amazing clothes, but someone has to put them together correctly, right?”

Many of LOGO’s signature pieces are knit basics trimmed with lace, chiffon or crepe de chine. Goldstein designs them for “women who really wanted permission to be who they are. There are a lot of baby boomers who are ignored in the marketplace. That’s a very big part of my clientele. But it’s very diverse. It’s never been about age. It’s really all about style.” 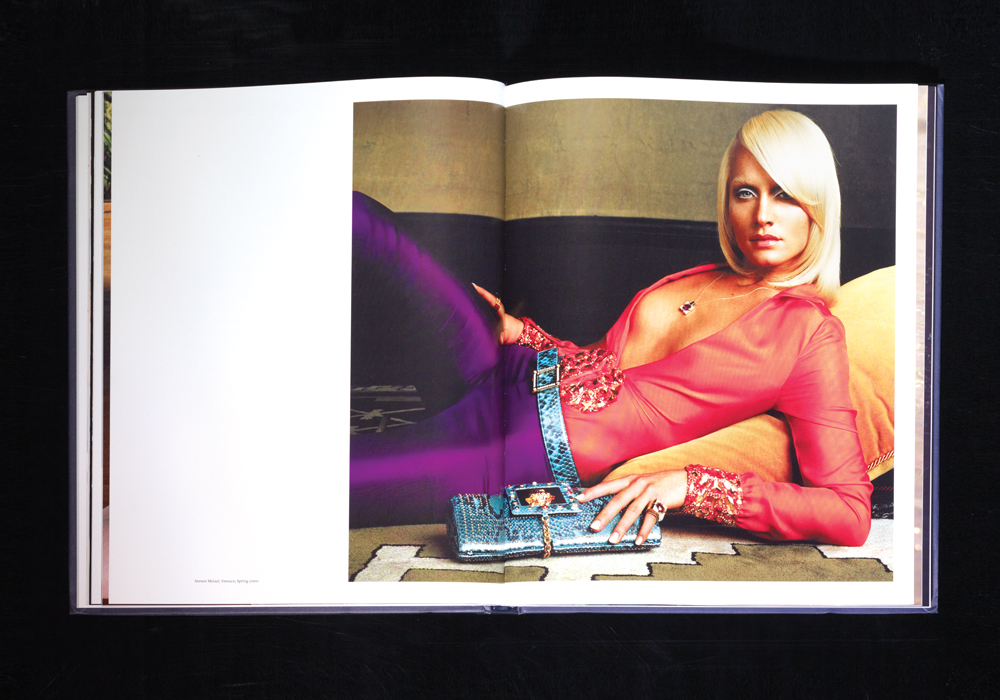 During her shows, Goldstein must spend several minutes explaining the wearability, construction and feel of each sweater, T-shirt or pair of leggings for viewers “who can’t touch these clothes until they get them home.” Like all QVC presenters, she must be scrupulously honest to gain a woman’s trust (and turn her into a repeat customer). “I get her. I respect her. I am in collaboration with her,” said Goldstein, who often speaks in italics, as fashionistas are wont to do.

“I do have a lot of fashion knowledge and I like to share it. I always knew I had a big mouth. It’s taken practice for me to really understand that I have to articulate what everything is. Fashion is about putting colors together and proportions that work. Prints don’t make us look fatter. Stripes can be worn anytime. All of these things I am getting across to her. If you have a great product she knows it.”

QVC has taken over Goldstein’s once Manhattan-centric life. As her appearances on the network became more frequent, she tired of the 120-mile chauffeured commute between her loft in New York City and the QVC campus. Recently, she bought an 18th century stone house near the studio to have a real home away from home. “Pennsylvania is major…It is really the country. You feel like you are a million miles away. And there aren’t any New Yorkers, but don’t tell anyone I said that. It takes 15 minutes to drive to QVC on these gorgeous back roads. I saw a billy goat yesterday, horses and lots of sheep—it’s heaven.”

HER PASTORAL Pennsylvania home is a far cry from the hyper Hamptons where she spent weekends for decades. Her first house on the East End was a cottage in the village of Amagansett that had trees growing through the windows when she bought it. “People in the neighborhood joked that Boo Radley lived there,” she recalled. “I redid the whole thing. It was very cute.” Then she traded up for a modern house in nearby Springs that was built by Richard Bender, one of the architects who redefined beach house style in the 1960s. “My forever friend Joe D’Urso redid it for me. I sold it five years ago. It was time to move on.” Now, she returns to the Hamptons once a summer for a “hit of the beach,” renting a house on low-key Shelter Island. “I am obsessed with that island—don’t tell anyone! It’s quiet and fabulous. It’s like the Hamptons I knew 30 years ago.”

Just back from her week at the beach, Goldstein is gleefully refocused on work. “What else is life?” she said. One of her workaholic role models is the late comedian Joan Rivers, who 25 years ago was among the first celebrities to develop jewelry and clothing collections exclusively for QVC. Goldstein recalled watching Rivers on QVC while in hotel rooms after a long day of shooting on location. “I was obsessed. I found it exciting, exhilarating and fast moving—everything I love, right? I met her, but I didn’t really know her. I wish I could say I did. She was my hero, and I love her. I don’t say that about many people. She was everything I love—smart, funny, tenacious.”

Goldstein partnered with QVC in 2009 when the network teamed up with Mercedes-Benz Fashion Week, which is owned by IMG, the sports and entertainment management and special events company. IMG had recently purchased Art + Commerce, the agency that represented Goldstein. All the threads came together. “Right time, right place.” 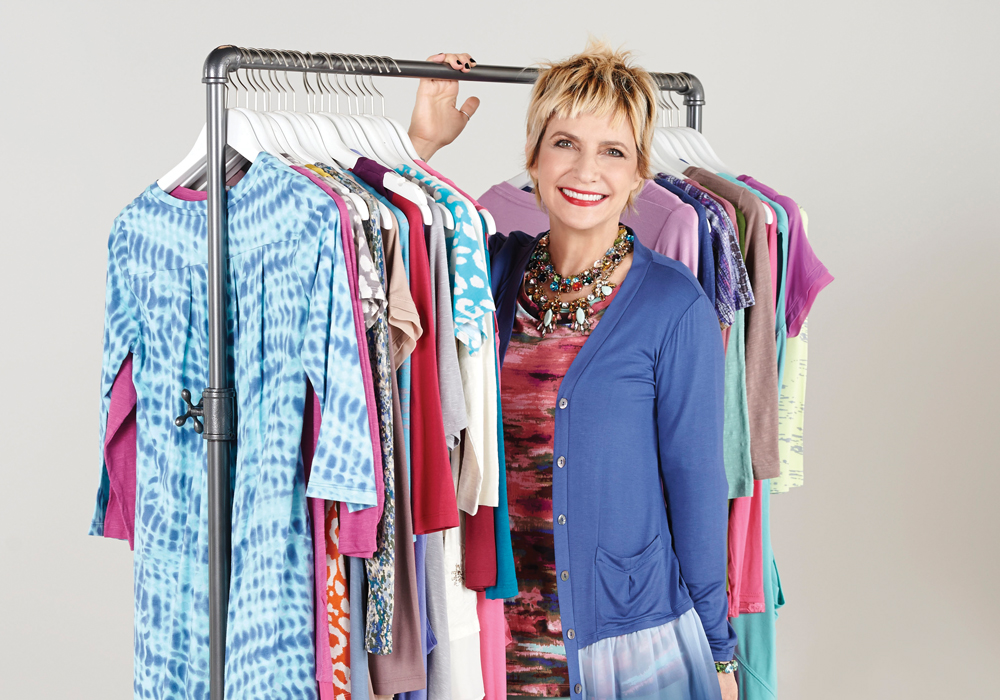 A few years later, she met David Dangle, who was Joan Rivers’ business partner—and now the QVC pitchman for the Joan Rivers Classics Collection. Dangle just happened to live in Goldstein’s building in Chelsea at that time and has since helped her develop a range of LOGO accessories. “What’s clothes without shoes, sunglasses, jewelry?” she said. “I have an advantage as a woman of knowing what I want and it’s a natural progression. My jewelry is such an important part of my life.” In July, Goldstein introduced another brand extension: a home collection that includes 400 thread-count colorblocked sheet sets, velour throws and faux sheepskin rugs. “Everything goes back to my theory of instant chic. Everything goes with everything. The premise of dressing up your home like you dress yourself.”

Goldstein has been obsessed with clothes since her childhood in Ohio. At age 20, she moved to Los Angeles and went to work at Fred Segal, the cutting-edge, multi-label boutique. When she accompanied her boss on a buying trip to New York, she fell in love with the city and moved to Manhattan six months later. She got a job at Fiorucci, a psychedelic uptown store near Bloomingdale’s with a downtown vibe. She fell in with an up-and-coming fashion crowd, hanging out with the Mudd Club demimonde (the Tribeca club was a magnet for experimental artists and musicians) and became friends with trendsetters like Anna Sui, Betsey Johnson and Patricia Field. Through these connections, she landed a job styling for Macy’s, which launched her career.

GOLDSTEIN ATTRIBUTES her success as a stylist and businesswoman to the education she received from working with photographers like Leibovitz. “I traveled the world with Annie. I learned about never giving up…I learned about respecting the process of being on a set. She is a tough cookie. She has the same work ethic I do.” The two famously photographed a nude portrait of a very pregnant Demi Moore for the cover of Vanity Fair. For an American Express campaign, they shot celebrities such as James Earl Jones and Sammy Davis Jr., but Ella Fitzgerald was her favorite.

She honed her eye and let her imagination run wild working with Steven Meisel, who she considers her style soul mate. The duo worked together on Italian Vogue for many years and advertising campaigns for Gianfranco Ferre (with Linda Evangelista) and Gianni Versace (with Amber Valetta, Georgina Grenville and Madonna). “Steven was the ultimate collaborator,” she said. “He has that sense of humor and seriousness I do. I would bring everything to a shoot and he would make it more magical than I ever imagined. He is still one of my best friends. What more can you ask for than to work with your friends?”

Goldstein doesn’t care that some fashion snobs look down at QVC; she thinks they are probably jealous. She stresses that QVC does not sell schlock. “Every trim is incredible. The quality is there. The style is there. I am not just throwing things out there to make money. I don’t make cheap clothes. For some women it’s still expensive. I never take the price point for granted. A $35 dollar T-shirt is not inexpensive and some of our pieces are $80 to $90.” Goldstein believes her designs have inviolable integrity and if she tweaked them in more expensive fabrics they could hang on the racks of the best department stores. “I don’t see the difference between QVC and Bergdorf Goodman,” said Goldstein, who mixes LOGO pieces with designer clothes. “I still have a lot of Gucci going on. I have my Gucci pink metallic loafers on as we speak.”