WHEN YOU MEET the fashion empire-building Michael Kors for lunch, you might expect salads all around. But his appetites don’t stop at the entrance to the dining room. “I know what I’m having. I’m going to be very New York and change the bread, but I’m going to have a roast beef sandwich. Perfect. I have to tell you, I am definitely not a kale enthusiast.”

Kors takes most things seriously in this playful sort of way, reporting to have threatened Gwyneth Paltrow at dinner the night before should he find one gnocchi on his plate astray. It was part of an agenda that started in New York and had him arriving in London to head straight for a press conference marking a new lifestyle partnership with McLaren Honda, throw a party to launch his new Regent Street flagship store, then pop over to the River Café to host a dinner for 100 friends (Jessica Chastain, Solange Knowles, Elle Macpherson, Dame Joan Collins and Paltrow among them).

At just 56 (he turned 57 in August), Kors looks fresh in his uniform of black T-shirt, black jacket and dark jeans. He is tanned, but not the deep mahogany color of lore. He’s polished, but not too perfect, which suits the peripatetic lifestyle he’s built. “I’m built for speed,” he said cheerfully. “I’m either at full tilt or I go on vacation and collapse.”

Ask him what the hardest thing about being Michael Kors is and without hesitation, he’ll admit it’s the calendar. But then, you don’t build a $1 billion empire with nearly 900 worldwide stores by farting around on Facebook all day.

Kors launched a womenswear line in 1981, filed for bankruptcy in 1993, relaunched in 1997 (the year he also became creative director of Céline—a fact that may blow the minds of those who thought the house began and ended with Phoebe Philo), launched menswear in 2002 and has since added bags, accessories, jeans, shoes, fragrance, sunglasses, watches and wearables to his eponymous megalith of a brand. In 2014, he joined the billionaires’ club, an elite pack whose members include the Wertheimers (who own Chanel perfumes), Giorgio Armani, Ralph Lauren, Dolce & Gabbana, Valentino and Miuccia Prada.

And this with every third woman toting a Michael Kors handbag—hardly the domain of the exclusive, aspiration-centric fashion houses of yore. The brand’s ubiquity goes some way to explaining the success of the man: if your girlfriend asks Santa for a Jet Set, a Greenwich or a Selma this Christmas, thank your lucky stars she doesn’t want a Chanel. Kors’ three most popular bags retail under $300. By contrast, a Chanel 2.55 bag costs $5,000. Kors’ stunning prescience pre-empted the current obsession with mid-market price architecture many years ago. The trend for accessible luxury? You could almost say he invented it.

“My wheels started turning a long time ago,” he said about deciding to make his bags (relatively) affordable. There was a time in the early 90s when Kors happened to be in Bergdorf Goodman on the first day of its seasonal sale. He watched as women “rushed the racks” looking for marked-down bargains when the proverbial light bulb went off. “Why am I not thinking about them? Why can’t I be more democratic? Not just with handbags—with shoes, jewelry, watches, everything. The reality is that people mix up everything anyway. When I was 20, I might have spent a month’s rent on buying a jacket and then wear it with a pair of thrift shop pants. But for a lot of fashion people, price and the idea of wearability and saleability are dirty words. As are age, size, height. I never felt that way, even a long time ago, because I did so many trunk shows and personal events. I was so young when I started. If I hadn’t done that, I truly would have been designing in the dark.” 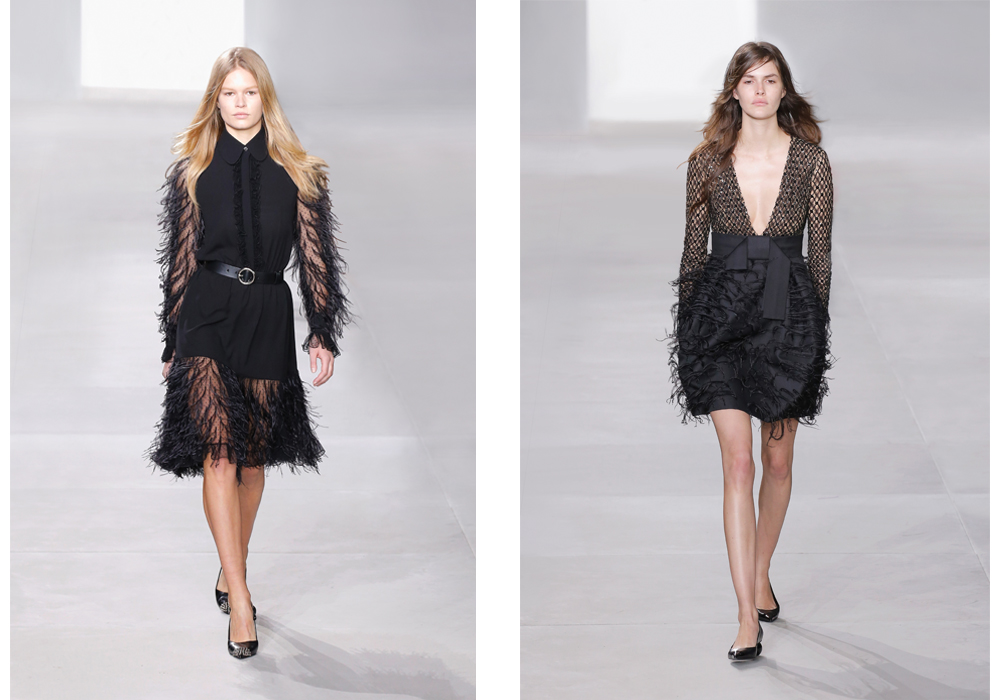 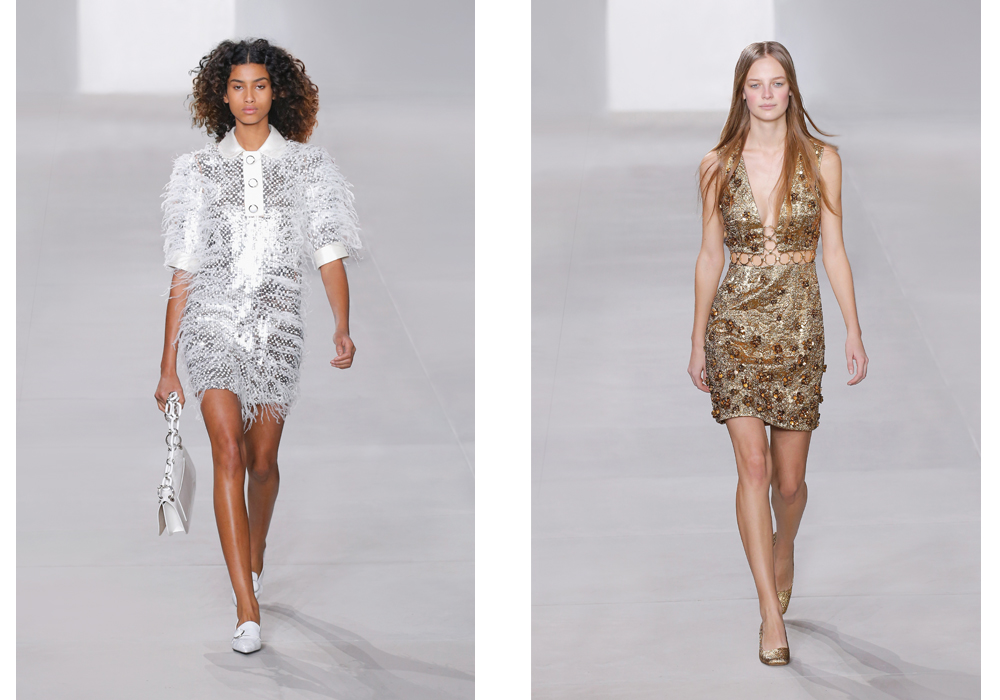 Kors’ success lies in his intent to be inclusive. He’s interested in people. “Even with celebrities…I mean, I can be pretty blunt with them,” he said devilishly. “I’ll say, ‘You look like you can’t move in that. Take it off.’” No wonder close friends (and world class divas) like Liza Minnelli, Bette Midler, Kate Hudson, Sarah Jessica Parker and Blake Lively all adore him. “The simple truth is that if you understand people and you’re curious about them, it’s a huge leg-up. Whenever I talk to students or designers who are just starting their business, I say, ‘Have you spent time in a store? Are you on the street? [Or] are you only friends with other fashion people? Because if you are, it’s a disaster. Get out of your bubble.’”

BORN KARL ANDERSON, the child model growing up in Merrick took his mother’s offer to change his first and last name when she remarried. After his early experiences—he appeared in a Lucky Charms commercial and became an actor—he finally decided to pursue fashion. In 1977 he enrolled at the Fashion Institute of Technology in New York City.

His egalitarian approach follows an almost straight line from there—it takes a peculiar kind of snob to ignore the potential dividends of dressing everyone, as opposed to a narrow remit of slim and wealthy. “I grew up with very opinionated wom- en. They loved to debate…I listened to all of it. A lot of fashion people, they burn their past…[but family] made you! You don’t want to get them dressed? I do. I’m interested. I listen to everything. I’ve had the same housekeeper in New York for 27 years. She has two daughters, and they wear Michael Kors. One of them is very petite. Tiny. She told me she tried on this coat and it overwhelmed her. The next thing you know, we started doing petite sizes. We make an American size 16 for the runway collection, but we also make a size 0. I don’t care if you’re 17 or 70. Everyone’s looking for similar answers. Maybe I’m old-fashioned, but I think that’s my job.”

Some fashion critics might dismiss Kors as too commercial, but in the same deft way he identified an overlooked market, he also identified his customers’ rapidly shrinking time frame in which to shop. Hence his sartorial punctuation points. “They’re the signifiers of how you get dressed,” he explained. “It’s a fabulous coat or jacket, it’s an amazing bag, it’s the right sunglasses, it’s a shoe that’s comfortable but cool and everything else kind of recedes. Those are the look-changers. And fragrance is a signifier. It tells people what mood you’re in, says something about you, finishes you off.”

The food arrives. I ask whether Kors would like to pause the interview while we eat. “Don’t worry, I’m a New Yorker. I’m a multi-tasker.” Lunging over lunch seems an odd, but apposite time to ask him about the pace of fashion. “The calendar globally is insane. You’re just going to give everyone burnout, and then no one can notice what’s wonderful. We used to show 90 looks. Now, I’m like, ‘If this is longer than 11 minutes, I’m going to kill myself.”’ He famously banned guests from Instagramming his resort collection in June. His defense is actually defendable: “People are overloaded and seeing too much.” Yet he still loves Instagram and has over eight million followers, calling it his “giant global trunk show.”

Despite the pace of his life (and this lunch, with all its many tentacles), Kors seems to be able to stay in the moment, fiddling with his phone only once when his husband called (though he doesn’t take it). He met Lance LePere in 1990 when LePere interned at Kors’ design studio while still a student at Parsons. They married in 2011 after gay marriage was legalized. “We have a similar point of view, but we’re different people,” he said about his “right hand.” (LePere is also head of Kors’ womenswear.)

Kors also has a 26-year involvement with God’s Love We Deliver, the New York City metro-area charity he first encountered when a friend was ill with AIDS. “How lucky am I? How could you not give back? I like results…That’s the key thing. I want people to feel engaged. You don’t have to be rich. People donate $5.” A nearly $8 million city grant (and a roughly $5 million donation by Kors), helped renovate and expand God’s Love’s headquarters, allowing nearly 1.5 million meals per year to be delivered to people suffering from AIDS, cancer and other illnesses.

If Kors is affectionately known as a name-dropper, it’s clear he does it more out of a duty to entertain than show off. A man who counts Oprah Winfrey, Hillary Clinton and Michelle Obama as clients and whose public offering in 2011 was one of the most successful in fashion history, probably doesn’t need to impress anyone. In fact, it may not be that Kors is a boaster so much as he is a people-pleaser. And central to that is his yen for inclusion and accessibility. “I’m convinced that it’s an increasingly casual world. I don’t know that we’ll go back.” He was talking about the way we dress, but he may as well have been talking about everything.