IT TAKES GUTS to open a restaurant at 4 Berry Hill Road in Syosset. There have been about 14 eateries at this seemingly doomed spot since 1990. But gutsy new owners George and Nick Nerantzinis, a father and son team who ran the Celebrity Diner for years, may just succeed because their new spot, Platia, might arguably be the most outstanding Greek restaurant on LI. Although the bright blue and white Platia looks much like the former Nissos restaurant (also a Greek establishment) there are a few minor new touches, including black and white photos of Greece and a bold blue canopy. But the biggest improvement is in the kitchen where Michael Giannakis now presides. He boasts an impressive resume that includes Manhattan’s Avra and Rao’s, and his menu of both conventional and creative Greek dishes delivers on both extremes. 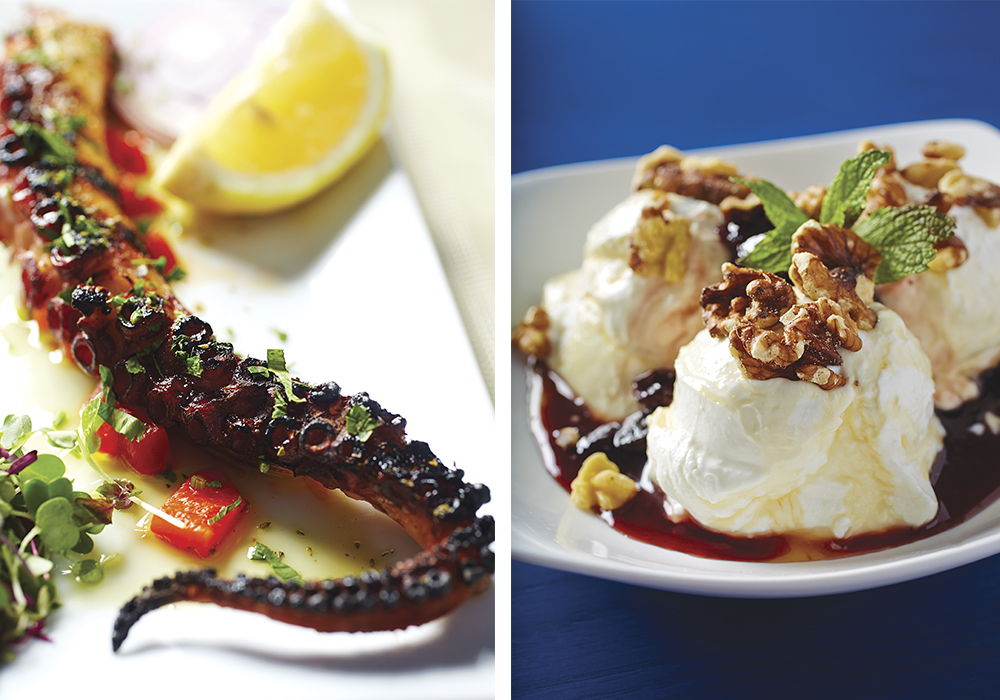 Especially impressive are the Greek golden oldies: moussaka, Greek salad, hummus, saganaki and yogurt. Quantity combines with quality here, as all the appetizers (and most entrées) were a sufficient size to share. The stack of zucchini and eggplant chips with a creamy tzatziki dipping sauce are addictive ($11); the two long strands of oxtapodi (char grilled octopus) with olive oil and vinegar dressing ($19), can be shared by a table of four. The large Greek salad ($12) is all that it should be and more and a huge beet salad with arugula, goat cheese, hazelnuts and apple cider vinegar ($14) harbors a substantial supply of beets.

Seafood lovers should target the whole dorado ($29) or the equally delicate halibut ($29) with soft, delicious lemon potatoes. Both come in a light lemon and olive oil sauce. Serious diners who want substantial meat dishes with big taste will be well served by the robust moussaka, dense with good ground beef, eggplant and zucchini ($20). The menu’s biggest bargain is a gyro platter bulging with rotisseried layers of assertively seasoned pork, salad, pita bread and French fries all for $17.

Aside from the rich yogurt studded with sour cherries, walnuts and honey ($8) desserts at Platia are the only weak course. There are only four of them including the usual chocolate and vanilla ice cream. The small slice of galaktoboureko ($5) had a soggy, disintegrating crust and at 7:45 on a weeknight Platia was already out of baklava ($5). What’s next, no feta cheese too?