The big summer vacations may be over for the season, but there’s still time to get away for the day, enjoy the waters and take in what we’re hearing are some impressive Long Island fishing trips. These charter operations will assist people of all skill levels and—for a price—even fillet your catch.

Dolphin, Freeport
The catch: sea bass, fluke
Out of Freeport, the sea bass and fluke are biting, said Tony Greco, captain of the Dolphin charter boat. Greco, who has been in the business for 50 years, goes out about four times a week. “We’re fishing both in the inlet and the ocean,” he said, adding that fluke season will be dying down toward the end of September.

When you head back in from your day on the water, be sure to try one of the many eateries along Freeport’s Nautical Mile. 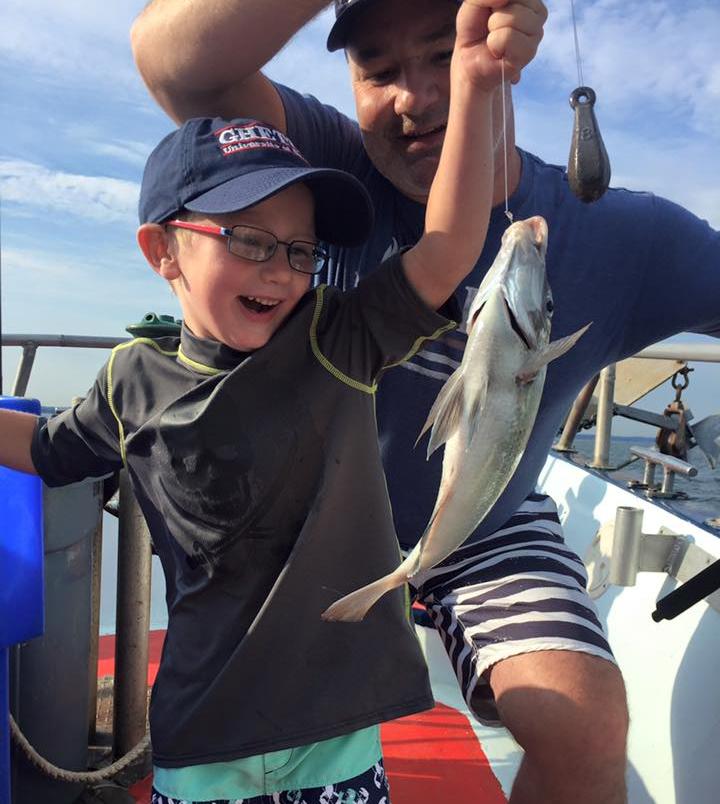 A young fisherman is overjoyed by his catch. image: facebook.com/JamesJosephFishing/

In Northport, porgy fishing using clams or sand worms is pretty steady from boats near the shore or even from a rock pile for the adventurous, said Phil McGowan, manager of Cow Harbor Bait & Tackle at the Brittania Yacht Club.

Deeper into the Long Island Sound, James Schneider, captain of the Huntington-based James Joseph II, is “pretty heavy into some angry blue fish…it’s as good as we’ve seen it in the last 30 years.” 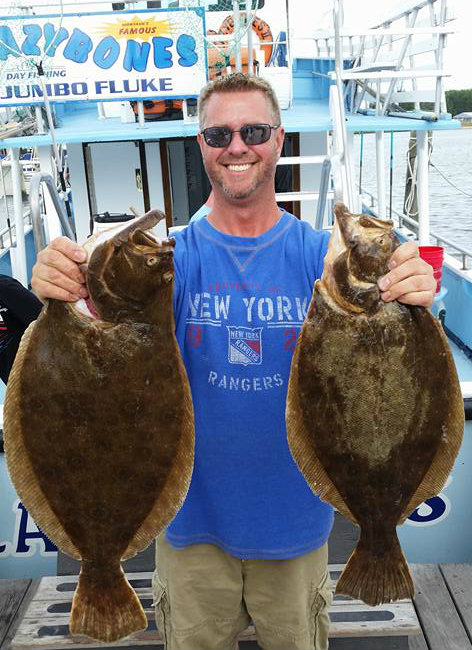 Chris Gray pulled in these 7.3-lb and 6-lb flukes aboard the Lazybones. image: facebook.com/MontauksFamousLazybones

Porgy fishing is usually good this time of year in Montauk, but Kathy Vegessi, owner of charter boat Lazybones, said they are going out for fluke and sea bass. “Especially sea bass,” said Vegessi, whose husband, Mike, is the boat’s captain. RSVPs are required for this charter boat, which goes out twice a day.

“Our motto is, ‘Bring your lunch and catch your dinner,’” said Vegessi, who noted that two local restaurants — Soursop Tree Café & Restaurant and Star Island Yacht Club & Marina — will cook up your pre-filleted haul.

If you want to keep the catch for later, there are plenty of local eateries to choose from, including nearby Swallow East and The Clam And Chowder House At Salivars Dock.

Peconic Star Express, Greenport
The catch: porgies, sea bass
“It’s been good all summer. Every day we’ve been doing well,” said Capt. Dave Brennan, whose Peconic Star Express in the heart of downtown Greenport is a “stone’s throw” from both the Shelter Island ferry and the Greenport Long Island Rail Road station.

Brennan said the quantity of and size of the sea bass and porgies has been excellent; he expects the catch to switch over to blackfish by mid-October.