Every morning, David Cooper wakes up to the rasp of roaring subways and the pounding sounds of rush hour. Winds wisp past the soaring skyscrapers and New York City’s narrow streets flood with crowds of commuters, tourists and businessmen. He navigates the mayhem of Manhattan with a 77 pound black lab named Parnelli at his side.

For Cooper, who went blind more than 20 years ago after a skiing accident, Parnelli is his navigator, his best friend and his life-saver.

“Every morning Parnelli is so excited to get up and go where we need to go,” Cooper said. “Each day can be a pretty big challenge. Having a guide dog is essential for me.” The freedom that Parnelli gives him to live his life how and when he wants is something he almost lost.

At 17, Cooper had the world at his fingertips. He was a member of the Aspen Ski Club with dreams of making the Olympics. Then, while competing in a super-G training race on Dec. 30, 1995, Cooper hit a tree. As a result of his injuries, his retinas became detached from his optic nerves. Suddenly, after having perfect vision his entire life, Cooper’s world went dark.

No longer able to ski, Cooper recalled “desperately missing the competition.” Worse, though, because he could not see, he became co-dependent on other people. 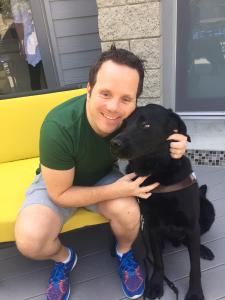 Though Cooper finished his senior year of high school and went on at the University of Colorado as planned, he struggled to get to classes on his own and needed his friends to walk him around campus. A year and a half after losing his sight, Cooper left his hometown of Aspen to spend a month in California training with Guide Dogs for the Blind. It was there that he met a yellow lab named Tacoma, who would become his first guide dog.

“The first few days were pretty eye-opening,” Cooper said. “Getting a guide was essential in regaining self reliance on myself and reestablishing my independence.”

With the help of his guide, Cooper could safely and efficiently get around on his own. After eight years Tacoma retired and a yellow lab named Lea became his new guide. In 2011, Cooper met Parnelli.

As one of about 2,200 active guide dogs in North America with professional training from Guide Dogs for the Blind, Parnelli works day in and day out to make life’s obstacles a bit more manageable for Cooper.

“A guide is so much more than just a mobility tool, a guide is really one’s soulmate and one’s confidence in facing the world,” Christine Benninger, CEO of Guide Dogs for the Blind, said. “The relationship is unbelievable between a guide and their handler.”

No longer dependent on another human, Cooper has spent the past 10 years as a financial salesman in New York City. His job frequently takes him up and down the East Coast, from Washington, D.C., to Philadelphia. Through it all, Parnelli leads the way.

“Having the ability to hop on a train and go to Penn Station is really impressive for Parnelli and for me,” Cooper explained. “It really feels good for both of us when we accomplish the goal and get where we need to get.”

And now Cooper and Parnelli have a new accomplishment to celebrate. To raise visibility for guide dogs as part of National Guide Dog Month, Guide Dogs for the Blind and pet food company Natural Balance partnered to select “Top Human-Canine Teams That Make Us Believe.” Cooper and Parnelli were one of the nine pairs recognized.

But the greatest reward the two share is that they are able to love the lives they live. In the city that’s said to never sleep, Cooper wakes up every morning with the chance to take on each day fully thanks to his best friend.