Four years ago, Alexis Trolf was living every chef’s dream. As chef and co-owner of Caffe Laguna in Long Beach, he was able to autonomously execute his culinary vision. The kitchen was his. In turn, he revitalized a once-popular-turned-lackluster restaurant, drawing praise from critics and diners alike. Then a 9-foot wall of water washed it all away. The weeks following Superstorm Sandy were some of the most difficult of Trolf’s life. “I can honestly say for a day or two after the storm, I wasn’t sure that I was ever going to come back. My house was wrecked, I lost my business and two months later my mom died.”

Trolf willed himself enough to work a handful of jobs at nearby eateries before making a reinvigorating stop at Manhattan’s Locanda Verde. “It was good to be amongst likeminded people again. It was good to be amongst people that were passionate.” Still, something was missing. “It’s difficult, once having worked for yourself, to reconcile trying to execute somebody else’s vision versus having been able to do yours. I don’t want to work for anybody else. I want to do my thing.”

He began to pinch every penny and bought a small space in the heart of Long Beach’s West End that was once home to a sausage stand and a shoe repair store. In January 2015, Trolf opened Lost and Found, a place where he began “doing his thing,” cooking food unlike any in the neighborhood. At Lost and Found, you probably won’t eat the same thing twice even if you wanted: in the first 18 months Trolf had 11 menus. “That, I think, speaks volumes to how the place has evolved.” The menu turnover also speaks to Trolf’s culinary philosophy. “I want to be an all-around chef. I want to know about the Italian or Mediterranean influence as well as the Scandinavian influence. I want to know where and why these age-old recipes, dishes, techniques come from.”

Menus are grounded in everything from crispy artichokes and niçoise to grilled octopus and dry-aged ribeye, potage, fluke crudo and flat iron au poivre. “I’m an intuitive cook. I’ve been at it long enough that I can have fun and experiment. I know recipes aren’t necessarily exact, I have a lot of techniques and tricks. I’m not sure that I cook new American food, or Italian or Mediterranean or European. I cook good food, fun food, delicious and rich food, and sometimes my ideas are a little bit off. It’s an ongoing experiment with the customers. They have enough faith that they’ll try something and if they don’t like it, they’ll tell me.” 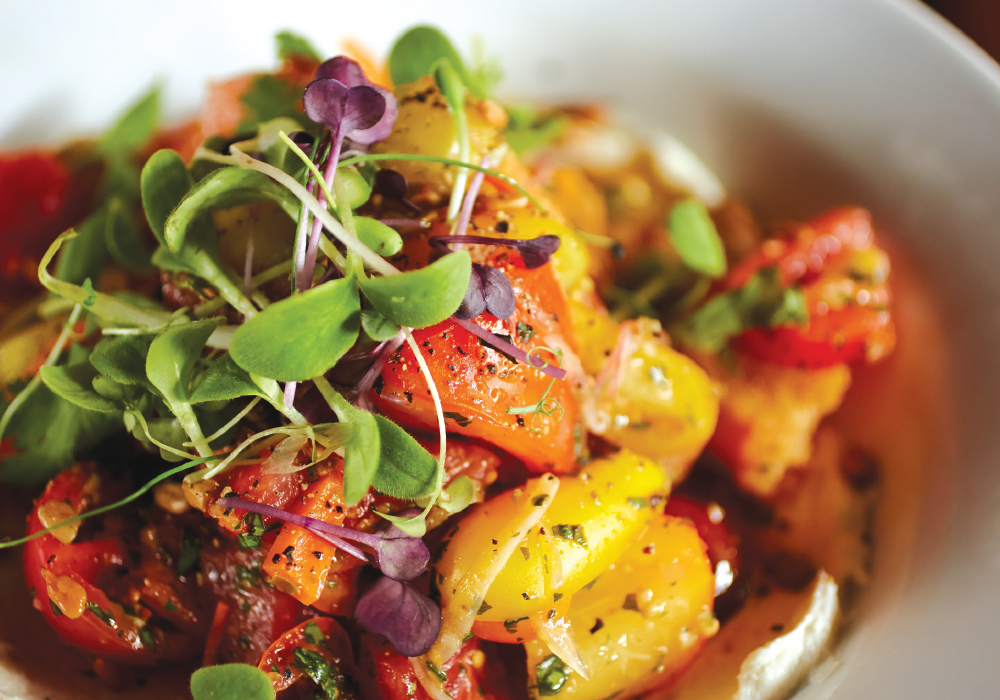 Unsurprisingly, inspiration comes from every direction. “Some dishes, believe it or not, have come to me in dreams. Others have come to me through will-power. I want to make something like this and I’m going to figure it out.” Clearly, he has. His experimental style has his restaurant taking reservations months in advance and has drawn near-unanimous praise.

Trolf’s food curiosity harkens back to his first foray into cooking, a time when he discovered food could be about much more than just digesting nutrients. As a kid, he didn’t want to touch his vegetables until, during his early teens, he started to realize that veggies could actually taste good, and that cooking could be fun. “Instead of it being a chore, it could be eye opening in many ways—culturally and creatively. It could be more than just the action of consuming in order to gain energy. It can be even transcendent.”

This latter quality is on full display as soon as the doors open. The small, 30-seat space creates an intimate environment, which turns Trolf into not just a chef but a host, teacher, neighbor, friend. He is known to interact with diners, explaining recipes and exchanging stories. “[The size] is not without its faults, but it’s also not without its charm. I like the intimacy that comes from the size of the place. I like that we have an open kitchen. Otherwise, I’d never have the ability to start that interaction. I’m very vocal, I’m very present.”

Dinner at Lost and Found is more like dinner at Trolf’s house, an embodiment of the community-driven, self-sufficient, barrier-island town it resides in. “Our approach is very much driven by a sense of community. I have whole roasted chickens as well as little, two-bite portions. Everything is meant to share, everything is meant to discuss, to have a kind of community aspect where people come in, they sit down together and talk to their neighbors.”

And the community has responded. Trolf feels his new approach is part of a larger change. “Long Beach isn’t just this culinary backwaters…It’s really turned into a place people can be proud of.”