Legendary musicians are often seen only through the prism of their past accomplishments. For Chick Corea, the legendary jazz pianist and keyboardist, those accomplishments are lengthy and storied. As a member of both Miles Davis’ band and Return to Forever, he is often credited as a trailblazer in jazz-fusion music. But Corea not only continues to work, he continues to churn out groundbreaking work with a unique style and sense of exploration. Last year, his album Trilogy earned him two Grammys—the 21st and 22nd of his career. And this fall, in celebration of his 75th birthday, he brings his 50-year catalogue to New York City during an eight-week residency at the Blue Note Jazz Club. From Oct 19-Dec 12, Corea will play with a variety of musicians, touching upon the milestone periods of his musical life.


Some of the standout nights include “For Miles” (a celebration of Miles Davis’ music), “Steve Gadd Week” (music Corea created with drummer Gadd) and “The Music of Return to Forever and More” (split into “acoustic” and “electric” nights, the latter of which will see Corea teamed with guitarist John McLaughlin, bassist Victor Wooten and drummer Lenny White). Corea’s accomplishments indeed continue, past, present and future.

How did your time with Miles Davis set your creative path?
The strength and simplicity of his integrity in the way he made his music is the single thing that’ll stay with me forever. It set a standard for me. He didn’t ask for licenses—he didn’t ask anyone—he just went ahead and pursued his own idea. He taught me to be a leader.

You’ve performed countless duets and collaborations, how do you decide which artists will perform which songs and shows with you?
The decision is not just mine. I will make suggestions and my duet partner will do the same. For instance, Gary Burton prefers to play mostly my compositions. Most of my duets are unrehearsed—sometimes the music can be chosen at soundcheck or prior to the concert or even on stage. The beauty of making music! 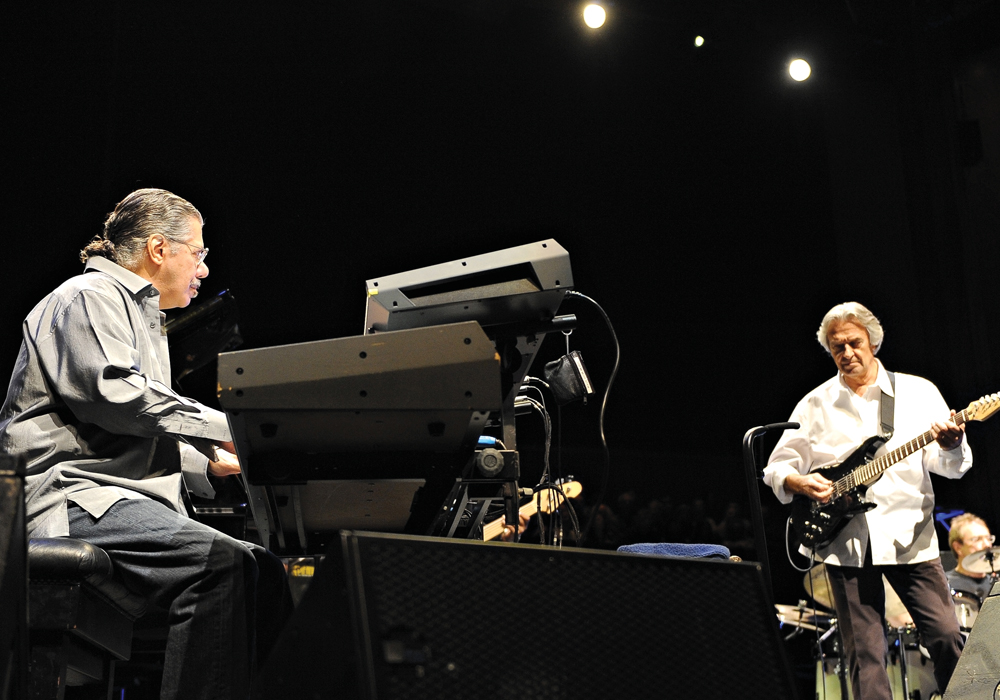 Chick Corea and John McLaughlin at the Royal Festival Hall during the London Jazz Festival 2008.

Who is one artist you’d like to perform with?
I have been really lucky because I have performed with some of the greatest musicians, but it would have been fun to do duets with Bud Powell. In my early days in New York, I played some gigs opposite [Thelonious] Monk in Mongo’s [Santamaría] band. He had his own way to play the piano, his piano playing was perfect. A duet with Monk…yes.

Did you have any idea in the early 70s that you were helping create jazz-fusion with Return to Forever?
Not really. It all came naturally from the progression of what was happening at the time. John McLaughlin’s Mahavishnu Orchestra was very inspiring. I hadn’t really heard a guitar played that way. I wanted to write more sonically in that vein. Shortly after, that’s when Return to Forever came about.

Which modern artists do you admire most?
I have always been a big fan of Stevie Wonder—and he’s sat in with me a few times, from a small club to the Hollywood Bowl, and he’s had me sit in with him. In the 60s, I didn’t listen to rock music. It was Coltrane, Miles, Monk, Bartok. But Stevie caught my attention and he’s held it ever since. His music transcends any style. It inspired me as a composer.

This is your third Blue Note residency. What keeps you coming back?
For me, the Blue Note feels like a New York home base. The audiences are tightly packed in and there to hear the music. There’s an intimacy you have that’s hard to beat…We’ve done three weeks, four weeks and now eight weeks. It just came together, and of course, my wish list of musicians/bands was bigger.

Do you have plans after the residency?
I will be touring with the Elektric Band next year, some orchestral performances with my piano concerto and I recently started doing instructional workshops online. This is a goal that I’ve wanted to realize for a long time—educating and encouraging creativity in artists. The world needs more artists!