If ever there was an artist to feature during the opening year of the Met Breuer, it’s Diane Arbus. The newly minted Met branch opened its doors in March to expand the museum’s display of significant contemporary art, and few artists in the 20th century were as influential and provocative as the famed photographer. Arbus, known for her gritty black-and-white photographs, was able to capture quintessential New York within her lens, a skill readily on view in diane arbus: in the beginning, which runs through Nov 27. The exhibition showcases Arbus’ rarely seen early works, focusing on pictures she took and developed herself in and around New York City during the first seven years of her storied career, from 1956-62.

The show has been nearly a decade in the making. “In 2007, we acquired [Arbus’] archive,” said Jeff Rosenheim, the Metropolitan Museum of Art’s curator in charge of the department of photographs. “Once I started doing the research and cataloging the work, I realized that there were hundreds and hundreds of images that had never been seen before. This show comes out of that multi-year effort.”

The exhibit’s focus on Arbus’ early works is dual purposed: to display her rarely seen photos and, maybe most importantly, to appreciate the sum of the catalog’s whole on its own, something Rosenheim says has not been done. “There are about 105 pictures in the show, two-thirds have never been seen before. Some of this material had been shown, but it had always been presented as a precedence of what was to come, not examined for its own sake. This is a time where she developed her technique, mastered her craft, explored the city as her home place but also as a foreign land.”

To distill it down to its essence, one could say Diane Arbus did for New York what Ansel Adams did for Yosemite. Her stark, intimate and intense photographs of the cityscape and the infinite cast of characters who inhabit it have, in the decades since her most prolific work in the 1960s, come to exemplify the charcoal grit and gallantry that is synonymous with black-and-white New York. 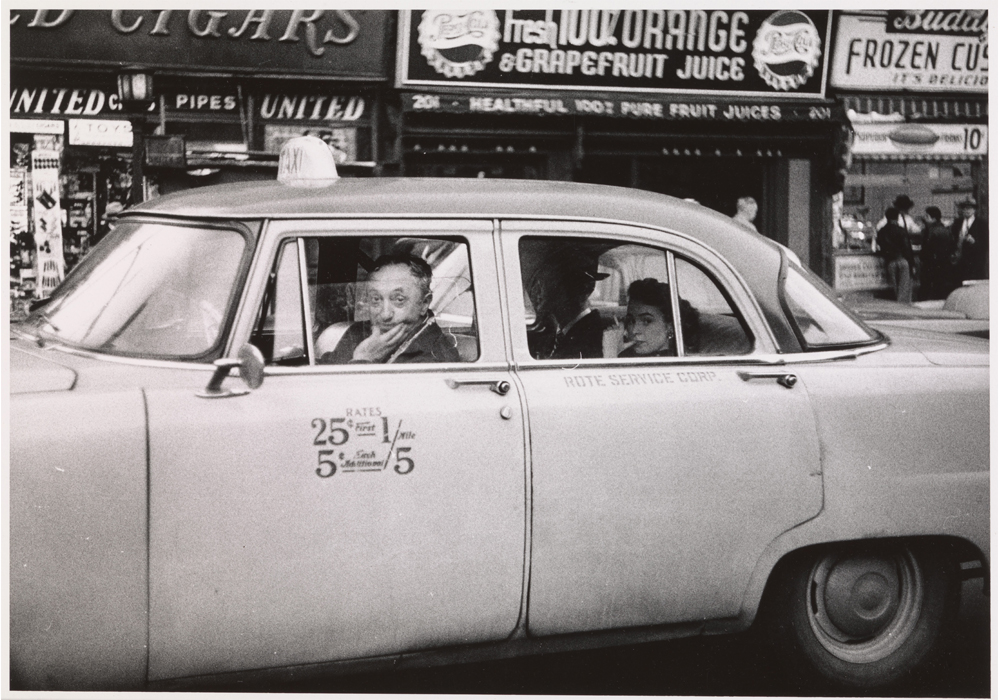 Taxicab driver at the wheel with two passengers, N.Y.C., 1956

Almost half a century before today’s climate of hyper exposure and the faux-intimacy of social media, Arbus did what modern personal technology cannot: capture her subjects at their most revealing and vulnerable with a sense of pathos and poetry. “She was fascinated by how the camera allowed her in, in a certain way, into the world that would be hidden by everyone else. And that she felt that she alone, with her camera, could share the secrets of her subjects. That they shared their stories with her is this kind of intimacy.”

In harnessing solitude, Arbus managed to capture the collective: a universal sense of loneliness, defiance and perseverance in the nameless every man and woman who make New York City the center of our modern, churning universe. Arbus, the ultimate people watcher, gives us a window into solitary truths within ourselves—and within one another. “She used the camera in a way that very few of her peers did. Arbus wanted something else. She wanted a more direct relationship with her subjects,” Rosenheim said. “We’re looking at subjects she looked at and that performative relationship that Arbus had with her subjects is on display.”

“Lady on a Bus, N.Y.C., 1957” is one such window into our collective soul. The subject is bundled in a winter coat and hat, expressionless as she sits quietly, staring directly into Arbus’ lens. In the woman, we see not only our mothers and our grandmothers, but also simple determination. The lines on her face imply years of city grit. She demands our admiration, yet we can sense she’s battling just to get through the day. It’s a timeless struggle fought then, fought now, fought always—with silent dignity. 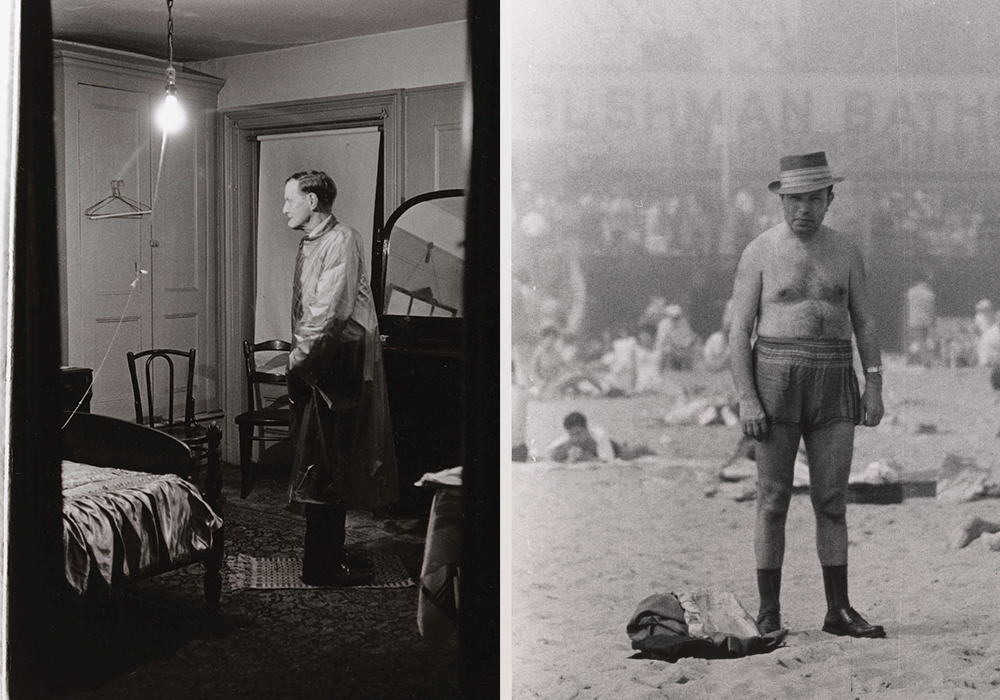 Rare individuals were Arbus’ muses, and sometimes her curiosity took her outside the city limits. Fully inked and flatout pissed off, “Jack Dracula at a bar, New London, Connecticut, 1961” could easily pass for contemporary Brooklyn cool, but the subject threw that hipster vibe at Arbus’ deft lens more than half a century ago. “Most people go through life dreading they’ll have a traumatic experience,” Arbus said. “Freaks were born with their trauma. They’ve already passed their test in life. They’re aristocrats.” With a coiffed pompadour, uber-sour puss and full body ink, badass Jack is sending Arbus a quiet “fuck off” while simultaneously pulling her, and us, in with his underground regality. Smokes and drink in tow, this miserable, anonymous cat is suddenly super Brando cool under Arbus’ passive, patient eye.

And the photos are not without humor. She presents her subjects without judgment, allowing their natural essence, however quirky or bizarre, to surge to the forefront. In “Man in hat, trunks, socks and shoes, Coney Island, N.Y., 1960,” Arbus lets her frumpy, grumpy subject speak for himself. Shrouded in a celestial fog, standing alone on the sand, the stumpy man hangs loose: dress shoes on, socks pulled up, drawers too high, slightly slumped with arms hanging low. One quick click of the lens captured everything absurd, unique and angelic about our crazy city (and world), and all the gloriously crazy people in it. “All of the pictures were printed by her in her lifetime. They’re small and super intense and powerful and the installation brings that to life,” Rosenheim said.

The ability to give a humanizing hug with her camera allowed Arbus to get close to her subjects, even at their most vulnerable. The “Stripper with bare breasts sitting in her dressing room, Atlantic City, N.J., 1961” might already be comfortable with her nudity, but the way she sits for Arbus, plaintive and patient, says more about Arbus than the subject. Only a delicate artist, one who leads with compassion for her subject and passion for her craft, can get so close in order to reveal so much. “She almost always made an effort to photograph when people were looking directly at her,” Rosenheim said. “Therefore, they look at us, as viewers. So our lives and our experience and our existence is suggested and implicated in very interesting ways.”