Beyond the front door of 7 Fairfield Pond in Sagaponack, visitors are immediately met by a breathtaking view of the Atlantic Ocean. A poured cement floor walled in by cedar screens to act as blinders draws attention directly and entirely toward the wide expanse of ocean beyond a solid glass wall. It’s an experience that commands the same sense of awe as the ocean itself.

It’s no accident, of course. The $50 million home was designed by Bates/Masi precisely for its location. Situated between Fairfield Pond and the Atlantic, it gets both sunsets and sunrises over the water. When Paul Masi designed it in consultation with the owners, connecting these two bodies of water was paramount. “In design, there is a hierarchy,” Masi said. “You have to know what is the most important aspect to have a strong idea you can carry through. This property is so unique—it’s almost a sand bar between the pond and the ocean. So how does the architecture support that?”

There are the obvious issues, like the fact that the house was elevated on 10 feet of pilings and that it has materials designed to withstand storms. But then there’s the artistry—the way the owners can incorporate the beauty of this land into their lifestyles. That’s where Masi’s gentle touch has impressed brokers and buyers again and again. 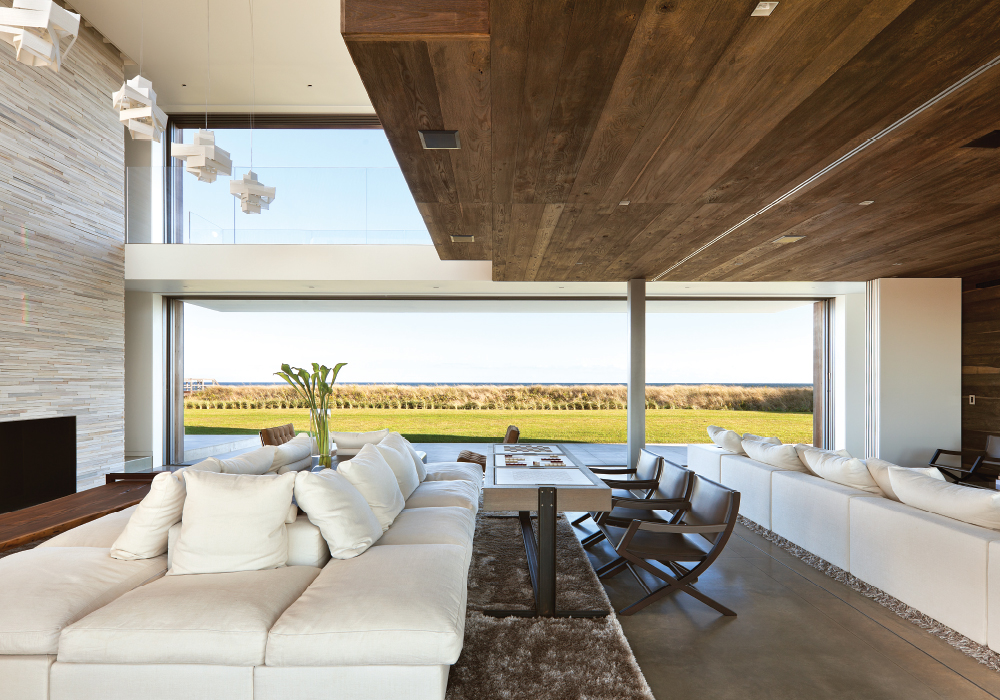 In the living area, slabs of sandstone are stacked floor to ceiling creating an attention-grabbing accent wall where a replace is carved. Cedar planks are used throughout the home to bring a sense of warmth and coziness. Operable partitions extend from the walls of the living room to create a media room within the space. image: michael moran/otto

“Paul reinvents the wheel every time,” said Susan Breitenbach, the Corcoran agent who has the exclusive listing on the house. She sold the original home about seven years ago and witnessed the design and execution of the new one over the course of several years. “He really listens to what the owner is saying and goes full force to design what they’re interested in and what really works. A lot of people recreate, but every time he starts from scratch and designs a totally new house.”

As Masi pursued this idea of connecting the two bodies of water, he carefully considered the open channels that allow the light and the breeze to pass right through. “The layout of the house was done so that areas of service [bathrooms, closets, laundry] are grouped together so you have these spaces where you can clearly see through the whole house,” he said. That idea translated to everything, like the cedar screens that echo from the façade of the home to the interiors. Strips of cedar allow light to pour through while maintaining privacy. Carved Corian guard rails in the bathrooms have the same patterns. The weathering steel fences at the entrance, which are brought back throughout the space, allow slits of light to travel. 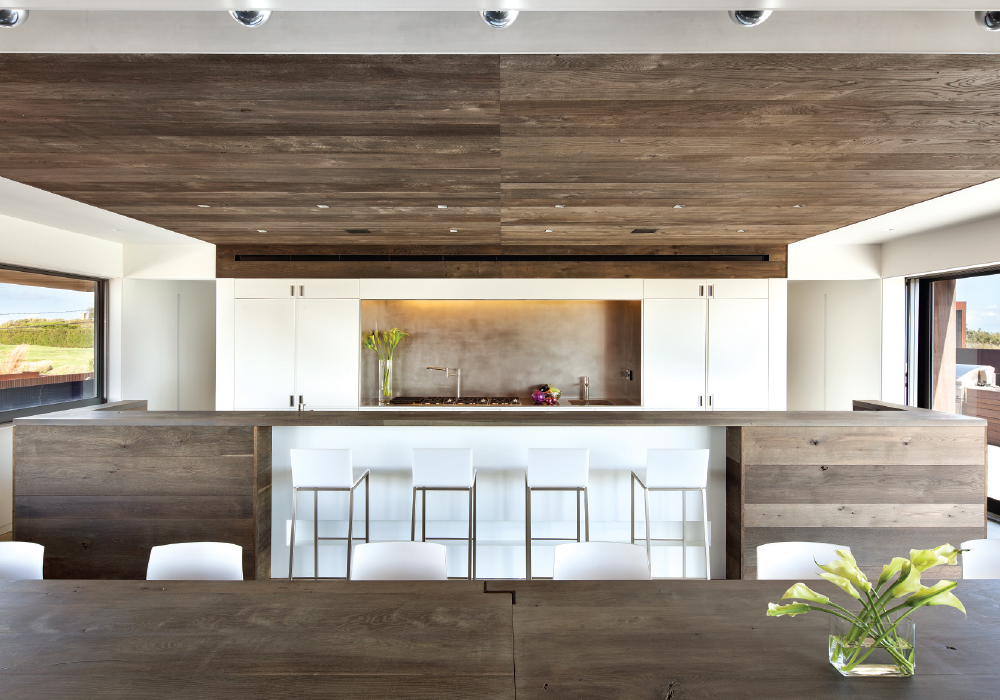 Masi draws inspiration from the original concept for the house. He looked at it as a solid, rectangular mass that he needed to carve. Even though the house is 10,000 square feet, it is significantly smaller than the one that stood before. “Most projects are additive. It’s about adding space. This one was subtractive. The house before overwhelmed the landscape rather than acknowledging it,” he said. Throughout this house of disappearing walls and organic materials, one could always feel completely outside. The ocean breezes and the expansive water views pervade the senses in every room.

The dining room, which easily seats 25, features one entire wall of wine racks, custom designed by Masi. And single panes of glass on each side render one wall to be all pond and the other to be all ocean. Masi uses this as a recurring theme— the house is a prism between two bodies of water, a sort of conduit connecting them.

Standing at the kitchen command center, the cook is at the helm of a ship surrounded by water and sky. A Corian countertop and wide oak floors balance a sleek and comfortable aesthetic that harmonizes form and function. A backup kitchen hidden behind the main one allows the host to clear out the mess and keep the serenity of the space while entertaining.

In the living room, an entire wall is made of stacked slabs of sandstone into which a massive fireplace is carved. That could be the focal point of the room, if not for the walls of ocean and pond. The fourth wall is made of cedar planks, a material used throughout the house to bring a sense of warmth and coziness. In this case, the cedar hides the television. “So, where do you orient yourself?” Masi asked. “We designed a couch in the center that faces all sides.” The television area, which is a part of this great room, has hidden tracks with doors that slide out to close in the space. “Most of the time you’ll leave it open, but if you want to watch a movie, you can close it off and it becomes like a den,” Masi explained.

Even with 8 bedrooms and 9.5 baths, each space has its own communion with the outside. Upstairs are the master and children’s wings. Each of four bedrooms on the children’s side is more or less identical, with a full window wall overlooking the ocean. Cedar screens separate the bedroom from the private bath that has river stonewalls, Corian carved tubs and showers with skylights that allow the light to pour in. The fifth is the bunkroom, where Corian bunk beds are carved into the wall. The detail would be lost on the children, but it’s the choice of material that gives the old-fashioned furnishing a sleek, updated look. 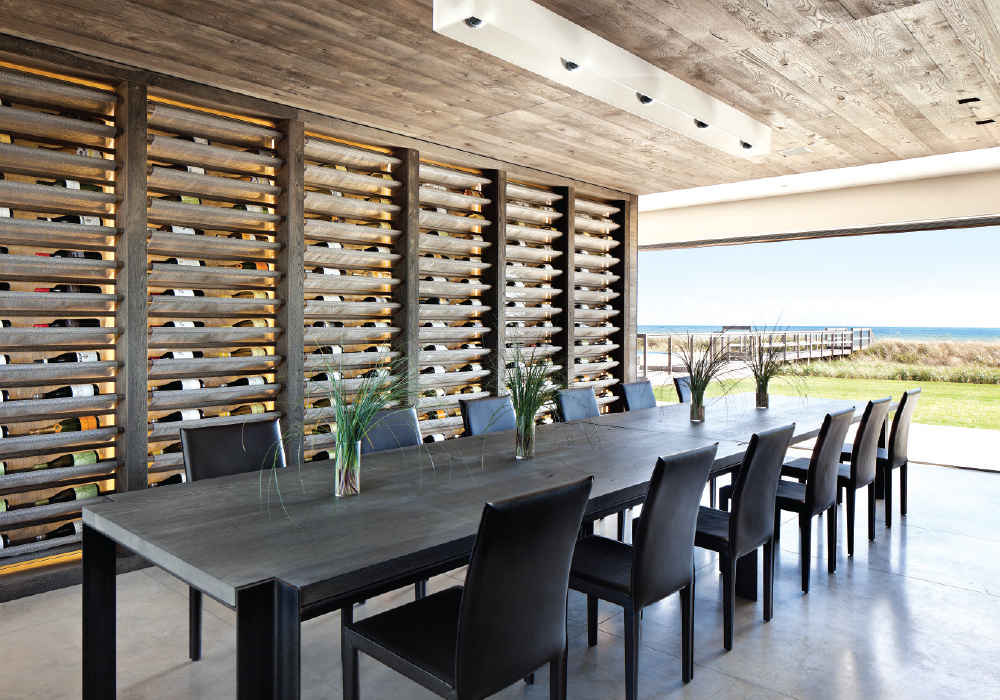 The ocean breezes and breathtaking water views can be enjoyed while feasting at the expansive dining room table. image: michael moran/otto

The master wing is a manifestation of the original owners’ desire to live outside. From the king-size bed, both walls disappear and the cross breeze between ocean and pond is constant. From here, one could watch the sun rise over the ocean and set over the pond. Two separate bathrooms have their own doors to the master deck, which has his and her outdoor rain showers. In between, and with perfect views of the ocean and the pond, is a hot tub where the two can meet.

The two guest rooms are downstairs: one faces the ocean and the other, the pond. “This was built for people who love outdoor spaces and outdoor bathing. I wanted to combine that experience of inside and out,” Masi said. The roof, of course, is an ideal way to get the full panorama of the ocean-front experience. A kitchen, fireplace, sitting area and hot tub have all been placed there, so too has just about everything needed to stay outdoors full time (weather permitting). And that central hub of the deck has been elevated enough that the safety rail around the perimeter doesn’t obscure the view from the couch or hot tub.

Back downstairs and across the rolling green lawn, which leads to beach grass and then to sand, lie the poured cement infinity pool, a hot tub with waterfall jets that cascade down from above and a picture-perfect pool house. The cedar walls still emit a subtle scent and the south-facing wall is, again, a simple sheet of glass that reveals endless ocean. A compact couch that unfolds into an unassuming bed and a small kitchen and bathroom make this the perfect getaway for a guest or two, redefining the concept of a “pool cottage.” 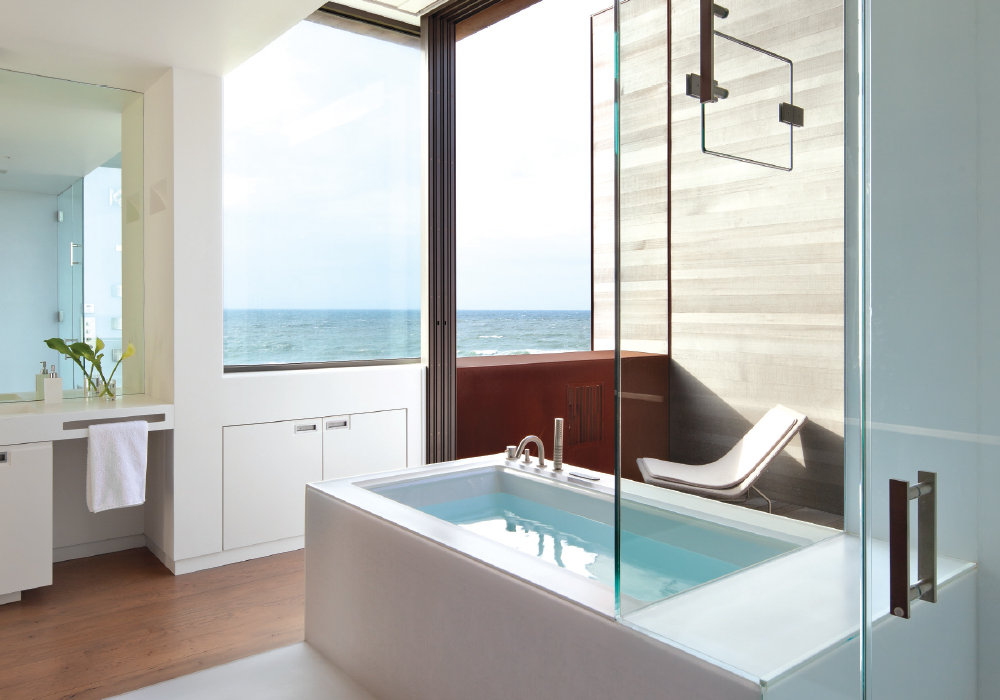 The three-acre property is unusually wide, giving it the same expansive feel as the house. “A lot of properties on the ocean may have 3 acres but it’s usually a rectangle going the other way,” Breitenbach said. “This one is wide oceanfront backing up to the ocean on front and the pond on the back. Plus there’s a big lawn. Very few houses on the ocean have lawns like that, especially in Sagaponack or Bridgehampton.”

The grounds were designed for fun. In addition to the pool, the beach and the lawn, there are more places to play, like the Har-Tru multi-purpose court currently set up for tennis and basketball hoops. A batting cage on the side catches baseballs before they’re smacked out to sea. Walk down the boardwalk and a flight of stairs and toes hit the sand, a 20-minute walk from the nearest public beach. This stretch of land offers the kind of privacy that allows for skinny-dipping, loud late nights and silent mornings.

Still, Masi’s favorite places are those “where you experience the pond and the ocean at the same time. Interestingly enough, the architecture begins to disappear and you feel as if you are on a sand bar.”