Irish Whiskey. That native spirit is the heart and soul of the Emerald Isle. The word “whiskey” itself is from the Gaelic “uisce beatha,” meaning “water of life.” Every pub in the country has a range of expressions on offer (along with the requisite Guinness on draft, of course). Pull up a stool at any watering hole in Dublin, Doolin, Galway or Cork and sip it slowly over the “craic” (conversation, fun, gossip, entertainment) that will undoubtedly be going on. But imbibing through Ireland’s great distillery houses brings more than a taste o’ the water, it’s also where modern and traditional culture blend.

My journey began in County Cork, where I stayed at the Castlemartyr Resort, a hotel featuring a high-end spa that’s surrounded by an expansive golf course. The five-star hotel is a sprawling building whose foundation is a restored manor house originally constructed in the 1600s. It sits on acres of well-manicured grounds about a half-hour outside the city of Cork. The Knights Bar, with its fireplace and comfortable upholstered chairs, is a choice place to sip some whiskey or order a Jameson Black Barrel Old Fashioned. It’s also a great jumping-off point for whiskey fanatics, since Castlemartyr is just minutes from the New Midleton Distillery in the small town of Midleton.

Although originally distilled in Dublin, Jameson moved operations to New Midleton in 1975, where brands including Paddy, Powers, Redbreast, Green Spot and Yellow Spot are also distilled. This move came after several parent companies were consolidated to form the Irish Distillers Group. As part of the process, old distilleries were shut down and relocated to Midleton, though each whiskey is aged and blended differently in order to retain its unique flavor profile.

The distillery tour began with a step back in time and a literal step into the preserved and rebuilt stone and wood buildings that once housed Jameson’s operations. This is all for show, a more sentimental, romantic view of whiskey making than the reality, which is more like a factory. Still, the industrial operations are fascinating. The large scale in which Jameson is produced, while still maintaining the singular flavor in every batch, is astounding. Inside the modern, glass-enclosed building where distilling takes place sits three sparkling, 75,000-liter pot stills that produce all of the barley spirit that goes into the whiskey (grain whiskey, also an integral part of expressions like Jameson, is produced in less showy column stills). If you have a chance to see master cooper Ger Buckley at work, stop and take it in. The salty, charismatic Irishman gives a thorough demonstration of the centuries-old craft of barrel making and repair. 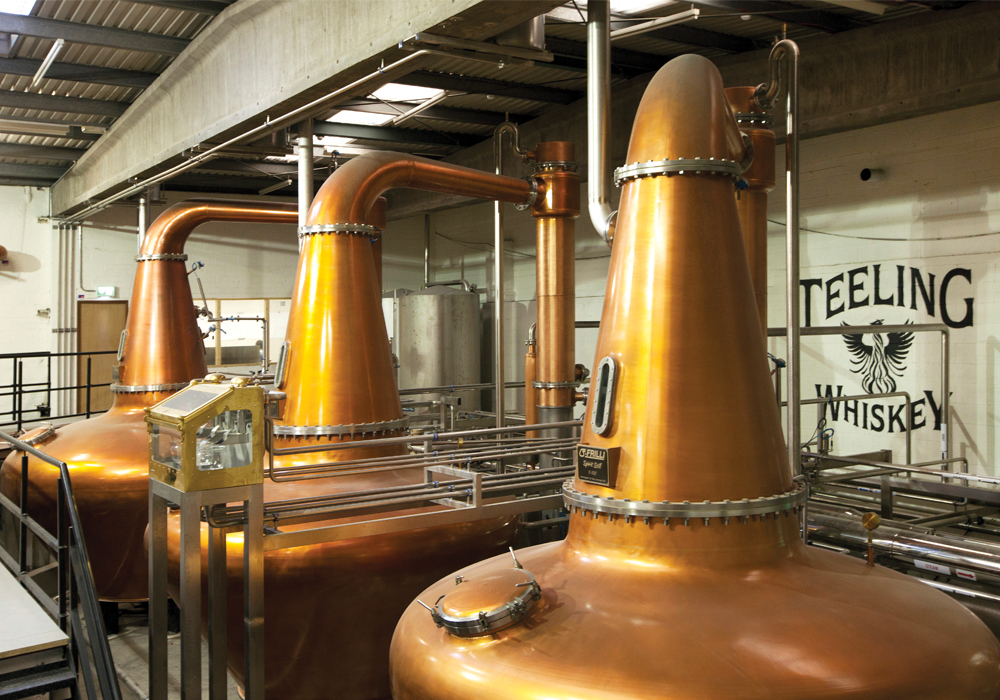 On a visit to one of the massive brickhouses, I was able to sample some cask-strength whiskey directly from both a sherry butt and an ex-bourbon cask, a true treat. This is perhaps the purest way to sample whiskey: uncut, unfiltered and at a rather high proof. It’s like a taste of Ireland in a Glencairn glass. The palate is coated with flavors from the Irish terroir—the grains, water, even the verdant air. Visitors are greeted by a heady, intoxicating aroma, as the angels’ share (alcohol lost through evaporation) wafts around the cavernous space. Barrels stacked by the thousands betray a staggering amount of product that has been expanding and contracting in and out of the casks as it ages, picking up the tannins and color that is the real source of flavor.

Dinner at Ballymaloe House, a hotel and restaurant that focuses on what they call “Irish country house” cooking, includes fresh produce grown on site. I enjoyed a succulent Irish lamb chop along with several drams of Redbreast, the perfect pairing to end a whiskey-infused day in the countryside. It seems in Ireland, whiskey is much like what wine is to the French—an indigenous alcoholic beverage that can be paired with a wide variety of food. The complexity of Irish whiskey in its various forms goes well with a range of flavors, from savory to sweet, and the culinary scene has embraced this fully.

About three and a half hours northeast along the main highway lies Dublin and the sleek, modern Marker Hotel, two blocks south of the River Liffey. The Marker is situated out of the busy fray of the Temple Bar area, but still an easy walk to attractions like Trinity College, St. Stephen’s Green and the various bars and restaurants that populate the city center. The Old Jameson Distillery in the Smithfield neighborhood, which is not an actual working distillery, offers a glimpse of what urban distilling was like in the 1700-1800s, once commonplace within the city limits.

But a new operation helping to bring urban distilling back is Teeling Whiskey Co., located in the Liberties neighborhood of the city center. Teeling is the first operational distillery in Dublin since 1976, and the first new distillery to open in the city in about 125 years. This has not only reinvigorated the interest of Dubliners who love their national spirit, but has set the stage for others to follow as well. The Dublin Whiskey Co., also in Liberties, was just purchased by UK drinks group Quintessential Brands and will start distilling there soon. Teeling is sourcing its whiskey from old stock, but will soon release its in-house distilled spirits. Time will tell how the new spirit will hold up, but Teeling has embraced the art of blending barrels, a craft that is vital to the entire concept of Irish whiskey.

Take a tour of the distillery (they recommend booking in advance) and stop in at the popular industrial-designed Bang Bang Bar for a cocktail or two. The bar has received accolades for its inspired drinks by mixologist Sean Maguire, like the Teeling Whiskey Spiced Porter cocktail. Or try the Bang Bang Dudley, a beer made in collaboration with New York’s Sixpoint Brewery that’s been aged in Teeling barrels. 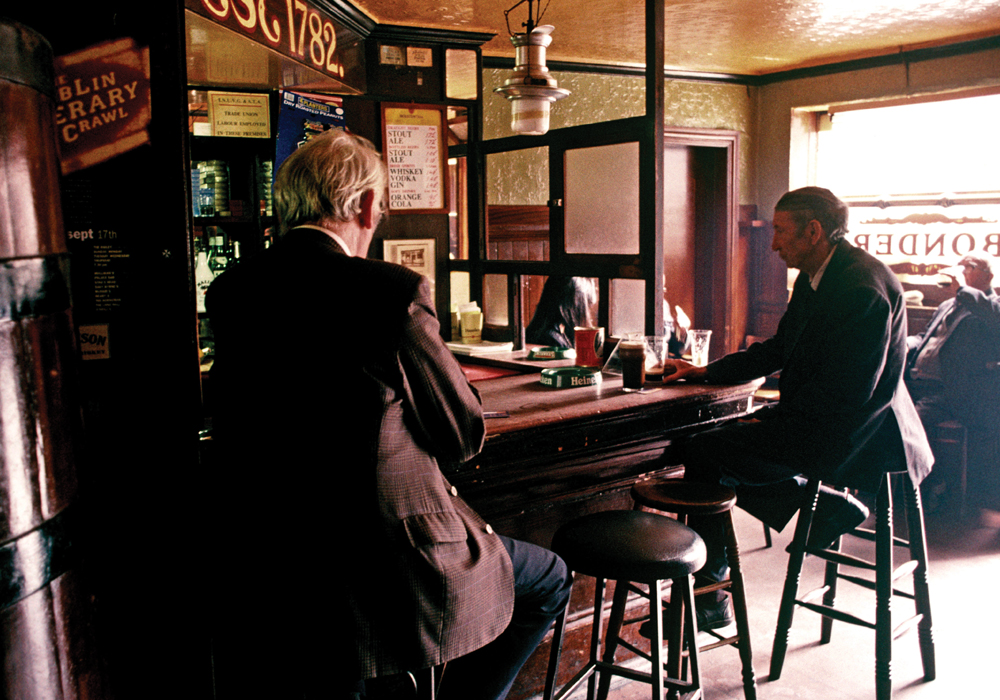 Across the river, L. Mulligan Grocer is a charming and comfortable pub with an old city feel that is just blocks away from the Old Jameson Distillery. The restaurant combines the tastes of old Ireland with modern culinary creativity, like the Scotch Egg, made with a free-range egg and something they call “pork scratchings.” The menu suggests a different Irish-brewed beer to go with each dish there—if you’re looking for Guinness, this is not the place. The decision not to serve Guinness flies in the face of common sense, but it’s indicative of the independent spirit of Dublin’s many new restaurants and bars. By focusing on local breweries and Irish whiskey, the restaurant defines itself as something different from the norm. Quench the stout mood (and keep a whiskey theme), by trying the Franciscan Well Brewery’s version instead. It is the same beer that Jameson Caskmates is barrel-aged in.

Outside of Cork and Dublin, there are plenty of other Irish distilleries to visit. Tullamore D.E.W., another one of the big names in Irish whiskey, has a visitor center in Tullamore, about hour west of Dublin. Since 1950, the whiskey has actually been distilled at the New Midleton Distillery, but William Grant & Sons, Tullamore’s parent company, is not part of the Irish Distillers Group. In 2014, they opened a new distillery in Tullamore, bringing whiskey production back to its ancestral home, a welcomed move. In Ireland, as is true here, people want to know the backstories of what they are drinking. At Tullamore, you can visit the Old Bonded Warehouse, learn about some of the whiskey’s history and sample different expressions like the 15 Year Old Trilogy, a truly brilliant Irish whiskey aged in three different barrels. On a much smaller scale, Glendalough, on the east coast about an hour south of Dublin, distills a variety of spirits, including several whiskeys, gin and poitín, a traditional clear spirit made from sugar beet, malted barley and potatoes. 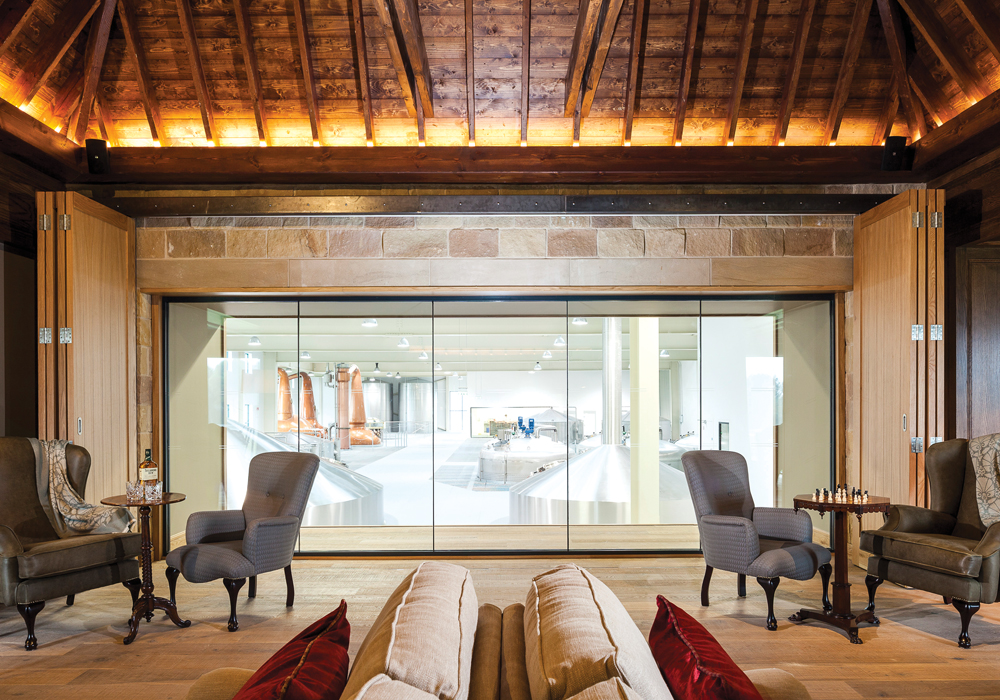 On my final night in Dublin, I headed out to The Academy for a show sponsored by Jameson. It was a celebration of all things Irish whiskey, featuring a cocktail demonstration by global cocktail consultant Oisin Davis. This was truly the old meeting the new in Ireland, with a flashy mixologist cranking out updated versions of classic cocktails while paying homage to the heritage.

There is so much more to Ireland than whiskey—the food, the music, the people, the craic—but visiting distilleries, sampling the spirits and learning the stories behind them is an enlightening (albeit slightly inebriating) way to get to know the country. While at The Marker’s hotel bar for a nightcap, a conversation with one elderly gentleman turned to talk of his work in the whiskey business and close calls he had with the IRA during his tenure with brown spirits. He smiled, raised a glass, and wished me a hearty “sláinte,” before heading off.