Verde Kitchen & Cocktails has kept Bay Shore buzzing since it opened on Main Street two years ago. Dishes made with herbs and peppers grown year-round in the glass atrium, candle lit tables and an upscale Mexican menu that boasts eight (yes eight) different kinds of tacos have made it a hotspot for date night or any night. Owner Anthony Tartaglia and his staff will bring a little bit of Mexico to Coindre Hall when the restaurant participates in Long Island Pulse Magazine’s Island Tasting to benefit Island Harvest Nov. 17. If they bring any of these five favorite dishes, guests will be able to say they’ve tasted heaven. 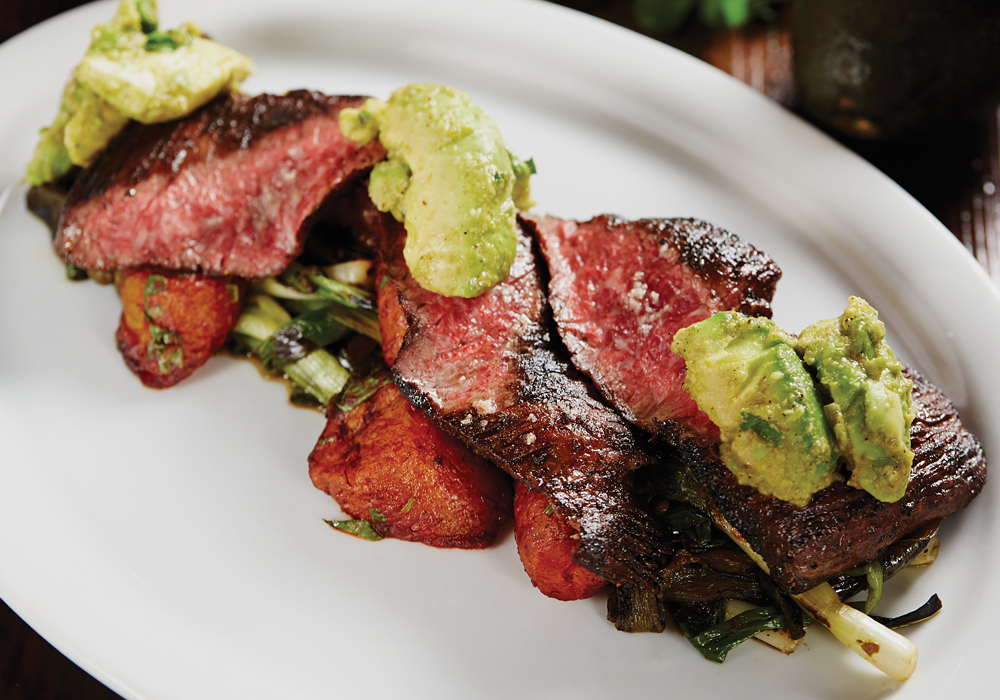 An accidental detour inspired this skirt steak dish, which comes with charred chiles, friend sweet plantains, avocado relish, toasted garlic rice and warm tortillas. Tartaglia and members of his staff visited a huge market in Oaxaca and got lost a few times. “They’d send you to all different vendors and show you what’s good and what you should order,” Tartaglia said. “One guy had vegetables, one had avocado, the other had freshly made tortillas and the next guy barbecued meats.” The result? The ultimate souvenir: a meal that has gone on to become the most popular entrée on Verde Kitchen & Cocktails’ menu. Pro Tip: Oaxacan is pronounced wa-ha-ken. 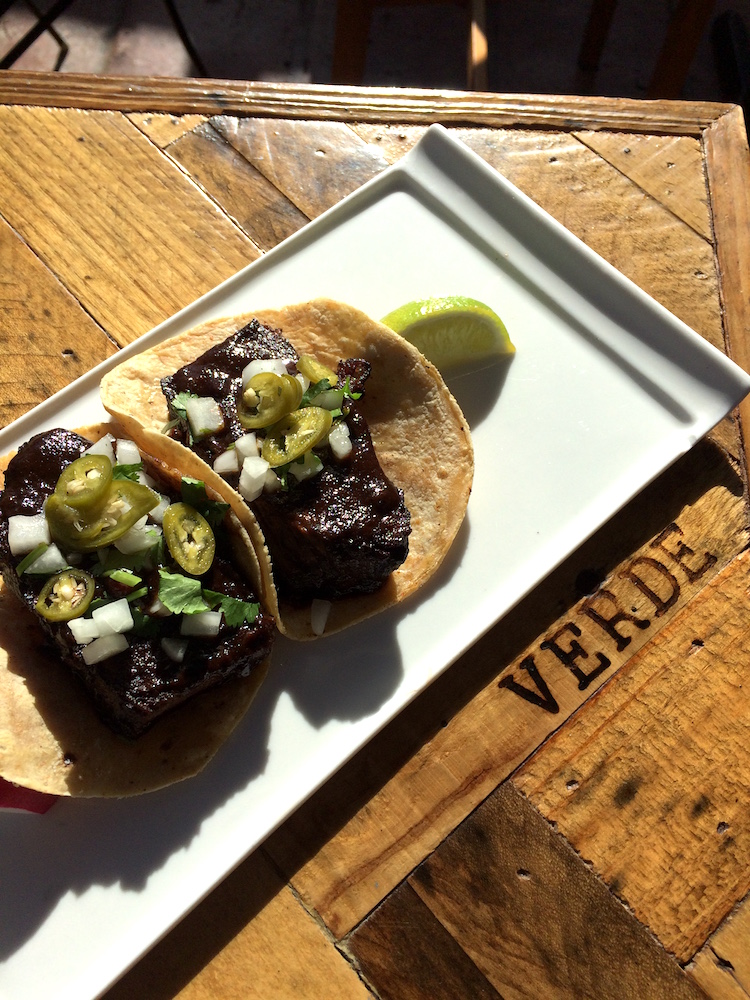 Picking just one taco from the extensive menu, which rotates seasonally, is tough—good thing Verde Kitchen & Cocktails suggests choosing two or three. Lately, guests have been ordering the Barbacoa tacos by the dozens. It’s tough to say which ingredient is the MVP, the marinade that consists of negra model Mexican Beer and Mexican Coca Cola or the thick slabs of brisket with pickled Serrano peppers. Both help the dish stick to the ribs in all the right ways, making it a perfect cool-weather choice.

Verde Kitchen & Cocktails’ menu can trend spicy—it’s Mexican cuisine after all—but sweet tooths need not feel left out, especially when it’s time to say yes to dessert. Tartaglia rotates donut flavors based on the season. This fall, expect pumpkin tossed in fall-spiced sugar, filled with a sweet pumpkin purée and drizzled with coconut pumpkin crème anglaise. “We love these because our customers love them! They’re a fun way to get creative with seasonal changes all while making a really good, fresh donut like you’ve never had before.” Order with a cup of Cafe Bustle Coffee or Oaxacan Blend, which Cyrus Chai & Coffee Co. sources exclusively for the restaurant. 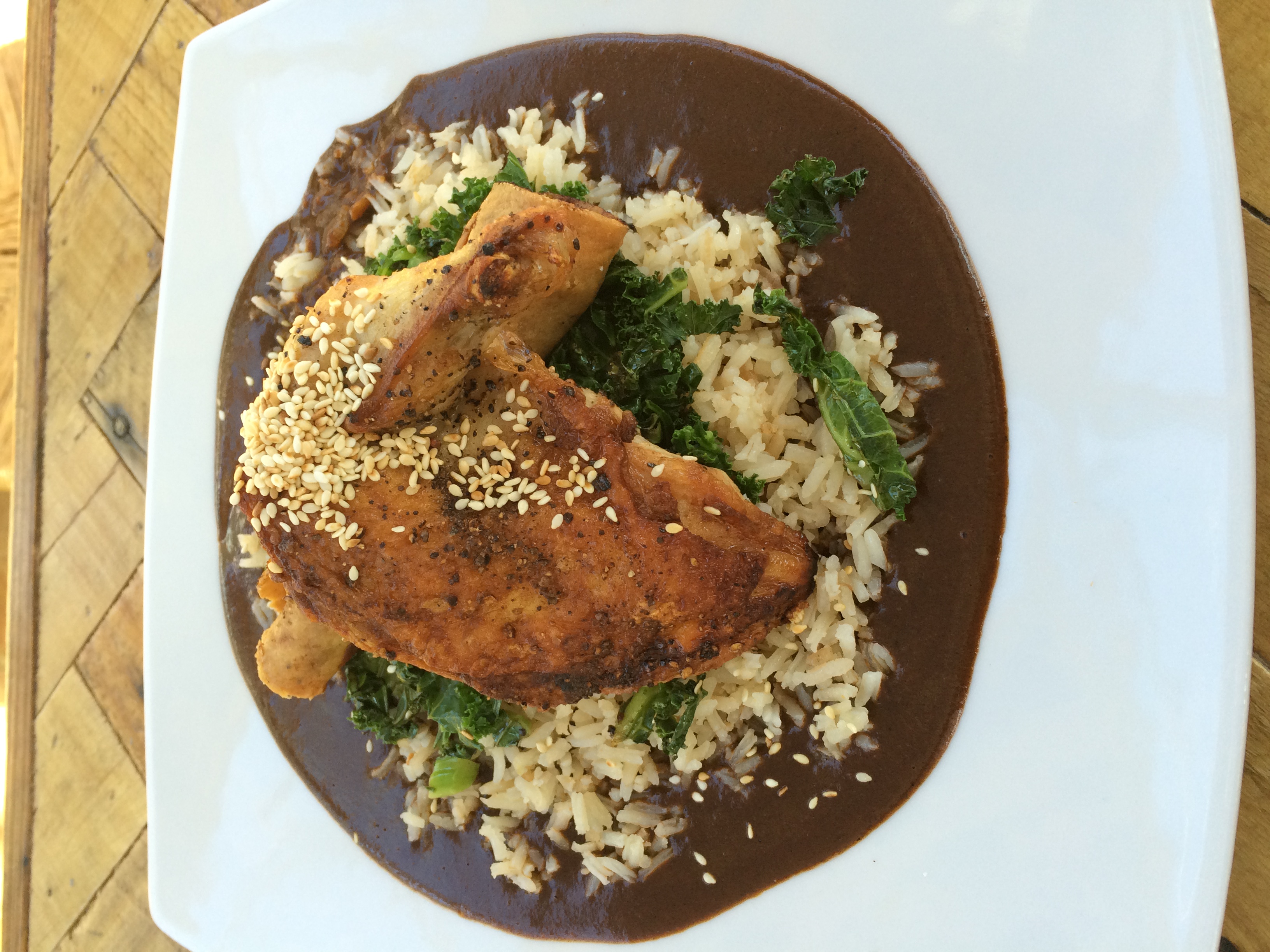 Another dish inspired by Tartaglia’s travels to Mexico, the Pollo Mole Negro is something of a labor of love at Verde Kitchen & Cocktails. It’s made traditional Oaxacan style with 27 ingredients. “It’s tedious to make and takes a lot of time and effort.” But it’s worth it.  “It’s extremely flavorful with hints of clove, sweet plantains, onion, roasted tomatoes, Mexican chocolate and five different chiles.” The chiles give it a subtle heat; the chocolate and plantains keep it mellow enough for the faint of heart.

Treat your assistant or colleague to a fun lunch full of sandwiches made Mexican City Street style. Verde Kitchen & Cocktails has a variety of options for lunch and brunch including pescado, camarones, carnitas and pollo asado. All are served on a house made taller roll with chipotle puree, negra model mustard aioli, lettuce, tomatoes and avocados.

Tickets for Island Tasting will go on sale later this month. Be the first to know when they do. Pulse readers can indulge their elegant, daring and foodie sides at A Night of Mischief Oct. 27.