Joe Ciardullo, the owner of C’est Cheese in Port Jefferson, loves cheese, wine and hard-to-find craft beer. For the past five years, he has had tremendous success combining all of these passions into a trendy modern eatery on Main Street. He opened his latest entrepreneurial adventure, Craft at C’est Cheese, along with business partner Chris Roche in September.

This unique “bar and bottle” shop combines the best of two worlds: a bar and a retail store. Now, customers can enjoy a pint while they shop for a variety of craft beers.

“It’s a unique buying experience. You can’t go into a traditional beverage distributor, crack open a beer and walk around to see what you want to buy,” said Ciardullo. “Here, you can order a draft from any of the 12 beers that we have on tap and then shop from over 200 cans and bottles that we have in inventory.”

But shopping for craft beer can be intimidating, especially for those who are new to the scene. The owners designed their store to be completely customer-friendly by palate preference. Hoppy sends people to IPAs and Pale Ales whereas Roasted and Dark sends them to Porters and Stouts.

“Educating and helping our customers is key at Craft. We really want to make sure that people aren’t intimidated by craft beer,” said Roche.

Craft also loves to show off Long Island beer. To encourage customers to drink local, the owners dedicated an entire section dedicated to breweries like Greenport, Fire Island, Oyster Bay and Montauk. There’s also a section stocked solely with exclusive items from Port Jeff Brewing Company that cannot be obtained anywhere else like a 2014 Cold North Wind, aged for three months in apple brandy barrels. That alone is a good enough reason to stop by.

“We’re very focused on stocking the more obscure, difficult to obtain, phenomenal beers,” said Ciardullo. “We want to keep it interesting for everyone. That’s why our taps will always rotate. Right now, we have Other Half, Long Island Community Beer Project, Tweaking Frog, Sand City, Barrier, Finback, Greenport, Founders, Urban Chesnut, and Ayinger. But once those kick, a brand new rotation will go on.”

People have quickly caught on to Craft, but the idea for the new hotspot evolved gradually.

“When I came back to work with Joe at C’est Cheese, he put me in charge of the restaurant’s exclusive beer club, C’est Beer,” said Roche. “Within a year, I grew the membership from 150 to 250 loyal members and we knew we were on to something.”

C’est Cheese had been using a storage space behind the restaurant for several years, but Ciardullo did not have direct access to it. While the building was being subdivided, he added a door to connect the two spaces and started talking seriously to Roche about opening Craft together. Even the drink-and-shop idea happened organically. 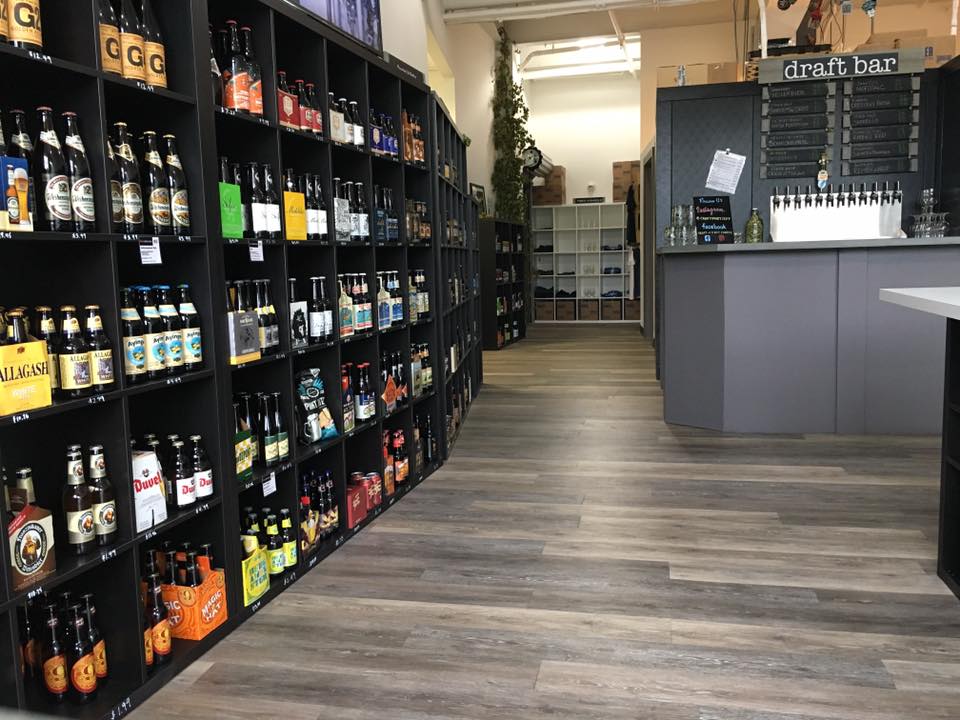 Craft is changing the way people shop for beer and it’s about time.

“On a whim, we decided to serve the guests pints,” said Ciardullo. “Everyone was congregating at the growler bar and having a really good time. Since our liquor license allows us to do this, we realized it was a very cool concept and we decided to make it an everyday thing.”

Craft has more big plans brewing. In the next few weeks, Ciardullo and Roche will be launching an online store with real time inventory where customers can place an order for curbside pick-up. Several tasting events are on the tap including Oyster Bay on Oct. 23 and Ommegang on Oct. 15. Customers have even started booking the space for private parties.

“It’s just a really cool place unlike anything we’ve ever been to,” said Ciardullo. “We can’t wait to see what else the future holds in store for Craft.”