Primi in West Islip may be new to the dining scene but owner Frank Bono and chef Louis Barresi have proven they have their fingers on the pulse of the people with their Italian spin on steakhouse. Guests have been raving about the homemade salmoriglio, which is herb-infused with olive oil and raw garlic, and a Spanish version of parmigiano cheese called Regonita since the spot opened in January. Primi will make its Island Tasting debut when Long Island Pulse Magazine hosts its annual event to benefit Island Harvest Thursday, Nov. 17 at Coindre Hall. Before the big night, I caught up with chef Barresi to learn about some the recent crowd-favorites and the highly-anticipated flavor combinations. 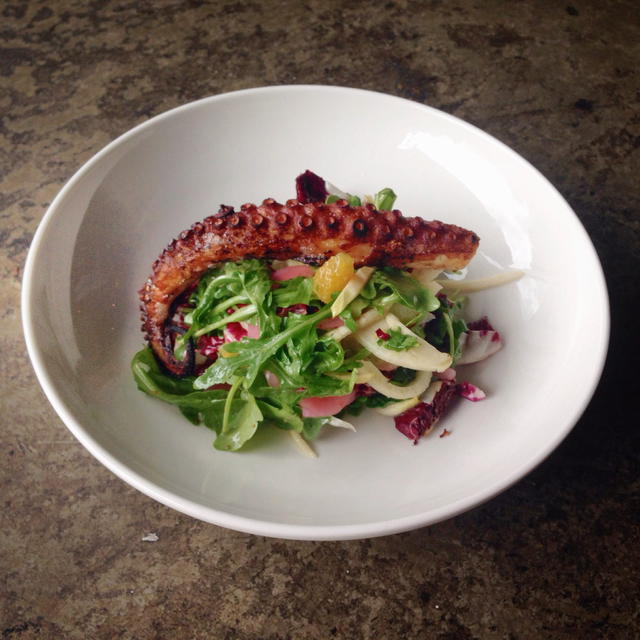 This appetizer is in a league of its own. Barresi said the octopus is boiled with “acidic [produce] like lemons and oranges to help extract the water from the octopus and give it a tender consistency.” The caps on the tentacles are lightly charred for a crunchy casing—followed by a juicy interior. It’s made with roasted parsnip, a savory herb crema mascarpone “that breaks down the acidity from the apple cider vinaigrette, and the sweetness from the squash [it’s served with] is balanced by the saltiness from the prosciutto.”

Now, here’s something you typically don’t see at an Italian restaurant—especially not with soy and ginger. The yellow-tail is thinly sliced and drizzled “in an orange, soy, ginger and sesame oil vinaigrette and then we add raspberries to give it acidity and clean the palate when you bite into it.” There are slivers of crispy rainbow potatoes layered on top for a deliciously earthy crunch. “Japanese and Asian cuisine does some of the best job with raw fish so we try to incorporate some of the flavor that they use.” 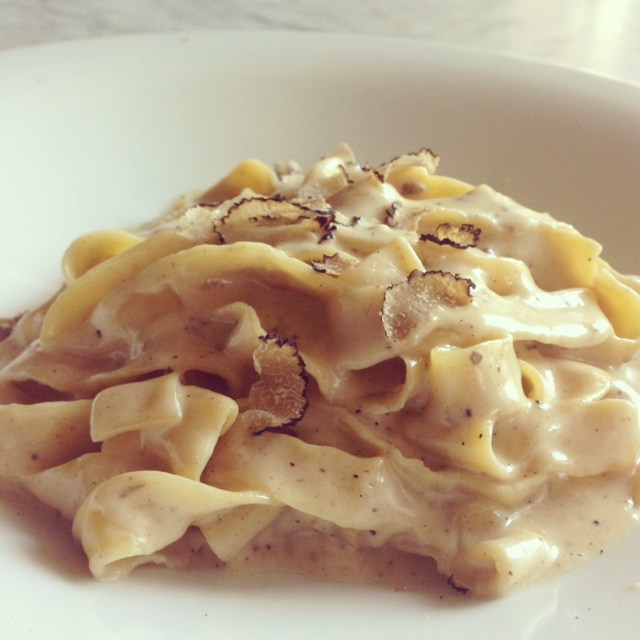 Barresi let me in on a little secret: “I let the quality of the food speak for itself by bringing out their natural tastes.” The lamb is braised with tomatoes, red wine and different seasonings for four hours. The aromatics and natural juices are then mixed with the house made long flat ribbon pasta for a forchettata that gets richer with every bite.

“When you have quality like Berkshire pork, a rare heritage of pig that’s grown in England, you don’t want to play with the actual meat.” Barresi fuels the flavor with agrodolce—an aged balsamic reduction of rosemary, and chili—accompanied by cipollini onions for the perfect balance of sweet and sour.

Baby Brussels sprouts are a game-changer. “We roast them in the broiler until they are charred on the outside and then we glaze them with vinegar—that has honey,” so it sticks. They’re then tossed with roasted almonds and dehydrated cranberries and finished with a shaved piece of pecorino Romano cheese for the most satisfying sharp, sweet and salty delivery.

Tickets for Island Tasting will go on sale soon. Be the first to know. This month, indulge your elegant, daring and foodie sides at A Night of Mischief Oct. 27.