Josh Goldman, the beverage director for DeNicola Brother Concepts, runs the day-to-day operations of the bar side of the business, which includes two Ruvo restaurants, La Tavola Trattoria in Sayville and three Del Fuego locations. His relationship with the family goes back 18 years, when he was expected to take a month-long vacation in New York before returning to his native Los Angeles, until cash ran dry in a week and he got a job at a restaurant where Joe DeNicola, DBC’s executive chef and co-owner, was a partner.

Goldman, now 38 and living in New Hyde Park with his wife, has grown with DBC over the years, focusing on spirits, and considers the DeNicolas a second family.

I caught up with Goldman recently at the Patchogue Del Fuego location, where he introduced us to a new drink: Tina Louise, as in the actress who played Ginger on “Gilligan’s Island.”

Related Content: 6 Places to Grab a Bite in Patchogue

One of your responsibilities is to drive consistency throughout the Del Fuego brand. What’s that process like?
We’re all so creative and innovative here, and we have such experience in our bar and culinary teams that everyone is coming up with new ideas. What I try to do is make sure we’re executing those ideas with precision throughout the brand so that our guests get the same experience at any of the Del Fuegos that they choose to come to.

Since Del Fuego is a tequila bar, how do you go about trying to pair tequila recipes with the Tex-Mex menu?
Everybody does their due diligence in the way of market research and we work together to come up with the seasonal fruits or vegetables or culinary ideas that we have, and I’m able to use my experience in the way of flavor profiles of certain brands of tequila and make use of the fresh juices that we have in house and the homemade syrups that we make as well and kind of make that all tie in together. 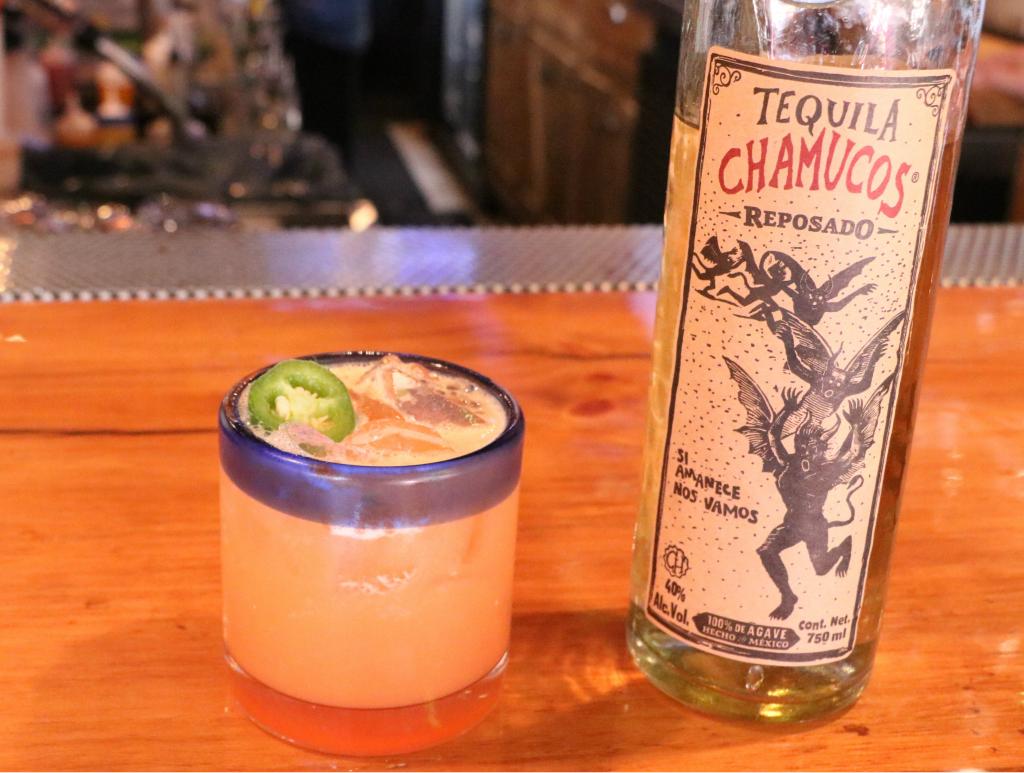 Del Fuego’s Tina Louise is made with Chamucos Reposado and is named after the actress who played Ginger on ‘Gilligan’s Island.’ It offers a bit of both sweet and spice, says beverage director Josh Goldman. image: carl corry

So what’s coming around for the fall and winter seasons?
Some of the herbs are making their way through the popularity chain—the sage; mint is something that’s always very popular…blood orange and pear and even some fruits we’re starting to incorporate into our seasonal cocktail changes. And then we have our mainstays, and some of those fruits are from the tropics—pretty much seasonal year-round. Passion fruit, strawberries, pineapples and that kind of stuff. It keeps us fresh year round.

When it comes to tequila, among your favorites is Chamucos Reposado. What do you like so much about it?
It just has a very earthy and rich quality to it. Some hints of vanilla. The agave really stands out in it, which is something that I’m personally a big fan of. And it’s just a neutral, not over-bearing tequila that makes for some great mixed drinks.

You’ve come up with a new drink called Tina Louise. Tell us about it.
Redheads get a bad name, but Tina Louise was Ginger on “Gilligan’s Island.” She was everyone’s favorite redhead. She never got a bad rap. I thought with the cold months approaching, I felt what better way to warm up with a spicy, sweet and beautiful redhead. So with the Tina Louise, we are using the Chamucos Reposado. We have some blood orange puree, fresh lime juice, muddle jalapeno and ginger beer. We want guest to get the sweet and the spice. We want them get to know Ginger—who she was, what she stood for, and how she made everybody feel when they were stuck on that island. It has a very nice, fall/auburn, fresh orange color and it kind of brings in the warmth before it kicks us in the ass.

In a mixing glass filled with ice, muddle one slice of jalapeno, then add the Chamucos Reposado, blood orange puree, fresh lime juice and agave nectar. Shake vigorously, then strain contents over an ice-filled rocks glass and top with the Goslings ginger beer. Garnish with a jalapeno slice.

Chamucos Reposado is distributed by Palm Bay International, which will be serving cocktails at Pulse’s “Night of Mischief” on Oct. 27.