Perhaps it’s best to look at Broadway’s fall season by noting what won’t be opening: Hamilton. The Pulitzer and Tony-winning (all 11 of ’em) juggernaut may be ensconced at the Richard Rodgers Theatre from now until eternity, but it’s no longer the new kid on the block. That’s a blessing for the plays and musicals about to open on the Great White Way, since they can flourish or fade on their own terms and not be overshadowed by the rapping founding fathers.

The question is: which of the upcoming shows might catch fire like Hamilton? Hopes are high for a revival of MacArthur and Hecht’s slam-bang newspaper comedy, The Front Page (opening Oct 20). Nathan Lane stars, which is pretty much all you need to know, except that John Goodman, Jefferson Mays, Holland Taylor, Robert Morse and Law & Order’s Dann Florek are also in it. The show’s run is limited to late January, so tickets will be hot. 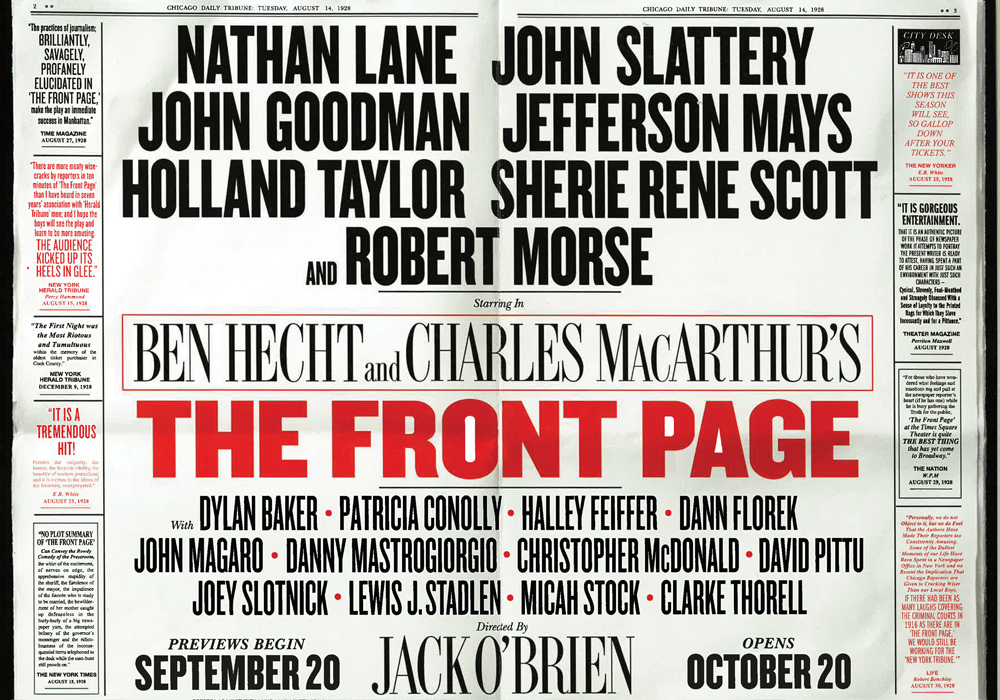 Cooler heads will prevail in Holiday Inn (Oct 6), a new musical based on the Bing Crosby and Fred Astaire film. It’s about a romantically-entangled quartet that perpetually endure momentous holidays—as good an excuse as any to serve up such Irving Berlin standards as “Easter Parade,” “White Christmas” and the nonsectarian “Cheek to Cheek.”

Another tuner—one replete with critical plaudits and positive buzz—arrives in the form of Natasha, Pierre, and the Great Comet of 1812 (Nov 14). With both book and score by newcomer Dave Malloy, Great Comet became an off-Broadway cause célèbre three years ago and has finally brought its epic rock-opera chops to Midtown. The piece tells of Natasha trying to restore her shattered reputation. Producers hope the presence of Josh Groban, as the titular Pierre, will bolster sales for this OBIE award-winning show.

Another star, this of the movie variety, comes to Broadway for the first time as an adult, when Diane Lane stars in a revival of The Cherry Orchard (Oct 16). Stephen Karam, Tony winner for last season’s The Humans, adapts Chekhov’s comedy-drama about once-wealthy Russians clinging to the last vestiges of their aristocracy. The play is a coming-home of sorts for Lane who was barely a teenager when, in 1977, the Public Theater brought its version to Lincoln Center. Lane was in an ensemble that included Irene Worth and Meryl Streep.

Another theater actress who made it big on screen, Mary Louise Parker, returns to Broadway this fall in Heisenberg (Oct 13), about two strangers whose lives suddenly intertwine. Raves greeted the play’s off-Broadway debut last year and the author, Simon Stephens, enjoyed similar acclaim for his previous effort, the Tony-winning Curious Incident of the Dog in the Night-Time.