Maison Premiere has garnered critical acclaim since opening in 2011, including winning the James Beard Foundation’s Outstanding Bar Program award last year. What has made the bar so successful?
We opened with a commitment to service, first and foremost, and that hasn’t changed. Keeping that focus sharp in the long run is definitely difficult. But it’s the key to sustainable success for us.

The bar offers the largest selection of absinthe in New York City. Why such a dedicated program?
We knew from the beginning that we’d be an absinthe-focused bar. The places that communities congregate are getting fewer than they were 100 years ago, especially in thick urban environments such as these. We were inspired by a vision of a place where people from all walks can come, be guaranteed a certain kindness and festivity and feel a part of a house that has played host to many epic evenings. Absinthe does harken to a previous generation and places where it was consumed typically embodied this egalitarian sort of bar or tavern. Plus, there was just a fierce misunderstanding of how it should be served. We wanted to give believable absinthe service.

What would that be?
Most of all, that can only come with serving believable absinthe. It’s a highly over-proof, highly aromatic liquor that expresses terroir just as good winemaking does. It couldn’t be more distant in concept from the synthetic emerald alcohol that appears to be drunk in dens by maniacs. It’s an elegant ceremony akin to tea. Of course, we love to give all the details of a proper absinthe service. This starts with slowly dripping chilled water over a sugar cube until diluted about four parts water to one part absinthe. One small bit of history we like to embrace at Maison is from before POS systems, computers or credit cards: absinthe cafes and bars historically would stack saucers underneath the absinthe plates to keep track of their patron’s tabs. 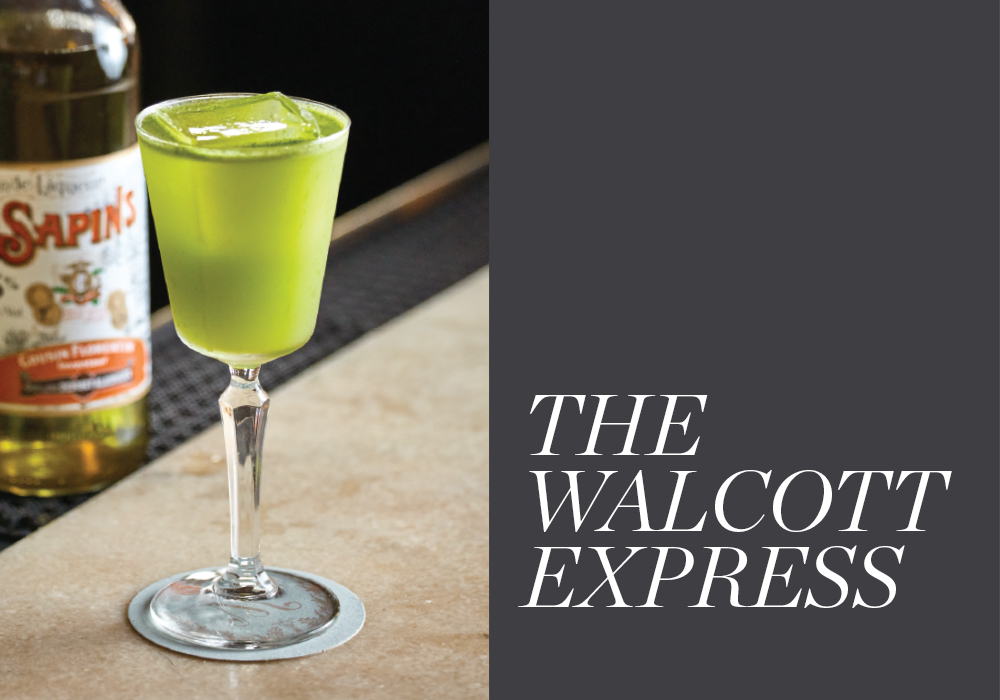 It’s easy being green at Maison Premiere. But don’t think Will Elliott is getting you there with bogus absinthe. His Walcott Express brings the emerald to the liquor and not the other way around.

What’s most intriguing about absinthe?
There are some spirits that are an expression of just one thing. But composing absinthe is really hitting the idea of terroir, of a time and location, and it’s a wild skill-set that we’re just getting reacquainted with now that it’s legal again. There’s a lot of cool absinthe being made nationally, but what’s important to remember is that it’s not the first time. Absinthe has a crazy production history in the US. You even had cities with localized styles. Coming back to that is really cool to see. I also think the cocktail resurgence—or whatever you want to call it, and the Sazerac being chiefly among the classics—has helped absinthe reclaim its former glory.

Do you prefer to drink absinthe alone or in a cocktail?
Alone, for a couple of reasons. For one, I don’t really drink cocktails all that much. I know that might sound crazy being head of a cocktail program like Maison’s, but I’m an honest guy. [Laughs.] Foremost, I think absinthe is best appreciated, best studied, alone. It’s really tough to discern a type of absinthe from one cocktail to the next, though some showcase it better than others.

What’s your favorite way to drink it?
I really love to drink it as a frappé, poured over crushed ice. It’s a traditional way that was served regularly in the Parisian-cafe culture. And instead of sugar, they would add Grenadine or Maraschino. I do that a lot. It gives a really nice counterpoint to the absinthe.

What’s your favorite absinthe cocktail on the menu?
Walcott Express is really demonstrative of how I most like to make cocktails: simply, with a sensitivity to the ingredients’ origins and as few complicating ingredient choices as possible. Of course, it’s so much easier to create layers and depth of flavor when the ingredients already achieve that on their own.

Basically Walcott Express is a gimlet, made with Sapin 55°, a pine-bud liqueur from Pontarlier, France; Germain-Robin Absinthe, a tea-, mint- and rose-noted absinthe from northern California; lime and lime cordial. It’s shaken very hard and for a full minute with a big grip of mint in the shaker tin. All that hard shaking gets the overproof liqueur extra cold and pleasantly dilute, but also serves to pulverize the mint to the point of turning the drink a deep extracted shade of green.

It looks just like it tastes, and vice versa. It’s bracingly refreshing. It’s herbal and cooling, while still retaining its drinkability.